San Antonio Zoo Paying Peruvians for Art to Save the Amazon

The San Antonio Zoo is paying indigenous Peruvians for artworks to help save the Amazon Rainforest — and you can pitch in, too, for as little as $100.

Overland Partners, the architecture firm whose offices abut Rosella Coffee Company on Jones, hosted zoo staff and friends of the firm on Thursday to admire and purchase art prints that sustain an international ecological project spearheaded by the San Antonio Zoo’s Center for Conservation and Research.

For the past seven years, the conservation center has operated Project Selva, which employs staffers in Iquitos, Peru, who purchase balsa-wood carvings of Amazonian animals such as tapirs and sloths from indigenous groups.

By paying Peruvians to create art, the zoo provides sustainable incomes to indigenous communities that are routinely beleaguered by foreign firms that seek to log, mine and drill on their lands.

In times of crisis, such as during a malaria outbreak, money is often short for medicine and other necessary supplies. Peruvians are often pressured by private interests to sell land and mineral rights to their lands to the loggers, gold miners and rubber tappers who seek the area’s plentiful resources.

“Their history with Westerners is not a positive one,” Fenolio said. “I think that the only reason that I even have the door cracked to discussions is because they’ve known me for most of my life.” 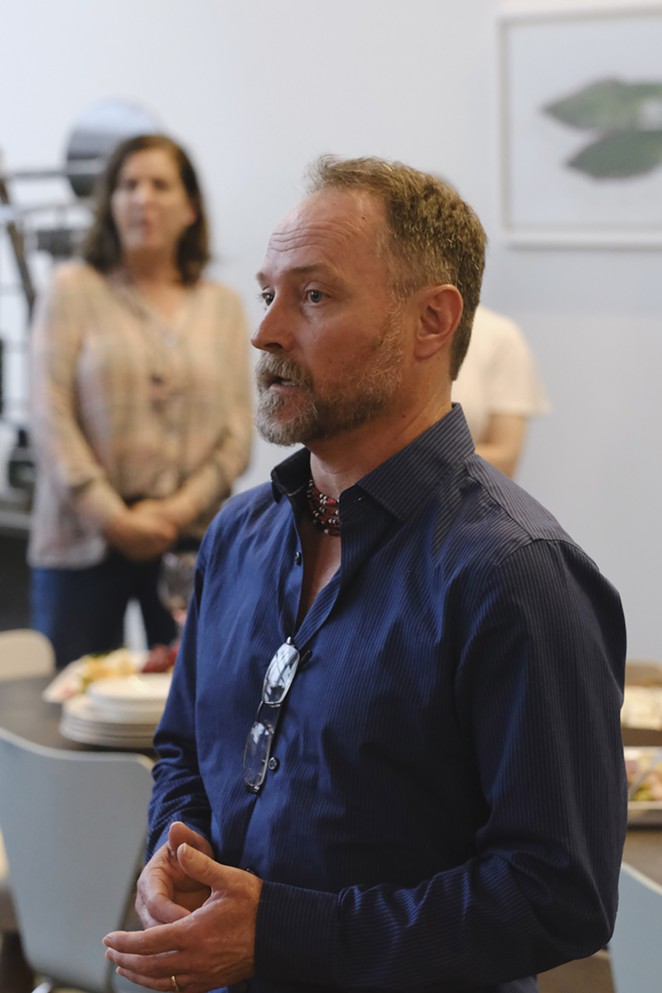 Fenolio described how in Iquitos, the Peruvian Amazon’s largest city, logging, mining and oil companies keep tabs on what communities are facing issues and are short on capital to spend on medicine and other necessities.

“There are a lot of folks that would stand to profit if they were allowed to come in and cut the wood out, mine, extract hydrocarbons,” Fenolio said, noting that primary rainforests, which develop over centuries, have never been successfully regrown.

Fenolio told the crowd he's built a lifelong relationship with local communities in Peru during the decades he spent conducting reptile and amphibian surveys in the Amazon Basin.

“I see a lot of them as family at this point. I care deeply what happens to them,” he added.

To fund the project and to bring attention to the richly diverse biomes of the Amazon, the Iquitos staff creates prints of Amazonian fish and amphibians in the Japanese printing style known as gyotaku.

According to Kamryn Richard, a senior conservation technician at the zoo, gyotaku is a printmaking process pioneered in Japan in the mid-1800s, which served as a way for fishermen to document the day’s catch before the advent of portable photography.

As Richard explained the process, a timelapse played on a TV nearby, showing a half-dozen Peruvians working together to make a print: they first lay ink on an eight-foot arapaima, then place rice paper on top of the fish. Once this big “stamp” has dried, the artists removed the paper and applied acrylic, watercolor, colored pencil and other art materials to add more details to the print — the very same print that was hanging on the back wall at the architects’ office.

Classic Amazonian freshwater fish such as piranhas, arowanas and arapaima — as well as some amphibians such as pipa frogs — were a few of the species depicted in the prints. The prints, Richard explained, reflect the biodiversity of the Amazon.

“There are more species of freshwater fish in the upper Amazon Basin than anywhere else on the planet,” said Danté Fenolio, vice president of conservation and research at the San Antonio Zoo. “We’re talking well in excess of 2,000 species.”

The fish are also an essential form of protein for peoples living in the Amazon Basin; the fish caught and used in the gyotaku printmaking are pigmented with soy-derived dyes, so the fish are safe for the artists and their families to eat later.

Fish print sales finance the Project Selva operation in Iquitos and permits Fenolio and the rest of the Iquitos staff to maintain a boat to visit and trade with the indigenous groups. In interviews, Fenolio was careful to explain that foreign art styles are not being brought to the Amazonian Peruvians; balsa-wood carvings have been part of their culture since before he met them, he notes.

Though each fish might have been used to make multiple prints, each print is itself a unique monoprint. Anyone interested in obtaining a print can donate at the ProjectSelva.org website in exchange for a print.

Though Overland’s offices are not open to the public, two employees in charge of the firm’s art selections said that folks are welcome to come in and request a tour of the fish prints.