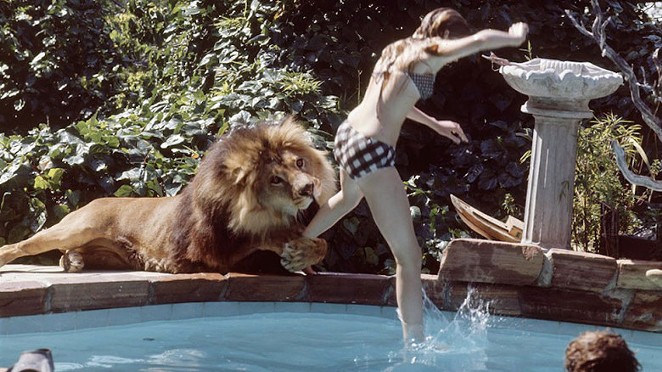 Disappointed by Tiger King's extra episode? Chances are, you're not alone.

Fortunately, we have good news: anyone still craving another binge of big cat-themed schadenfreude need look no further than the Alamo Drafthouse for their next fix.

Starting Wednesday, as part of its Alamo-At-Home Virtual Cinema initiative, Austin-based Drafthouse is offering an online rental of the ill-advised 1981 adventure comedy Roar.

In its own way, Roar has all the gasp-inducing insanity of Tiger King. It wasn't your typical film: director and producer Noel Marshall and iconic actress Tippi Hedren made the movie using the 150 big cats that they themselves owned — and even slept with. A family affair, Roar stars Hedren and Marshall alongside their respective children, Hedren's daughter Melanie Griffith and Marshall's sons Jerry and John.

Truly, the actors in Roar were put into as much peril as the tiger-obsessed individuals chronicled in Tiger King. While it appears no one lost any appendages during filming, IndieWire listed grievous injuries received by cast and crew on the picture: "cinematographer Jan de Bont was scalped, requiring 220 stitches; Griffith was mauled by a lion, which required facial reconstructive surgery; an A.D. narrowly escaped death when a lion missed his jugular by an inch; Hedren, who was also attacked by birds on the set of The Birds, endured a fractured leg and multiple scalp wounds; and Marshall himself was wounded so many times that he was hospitalized with gangrene."

A quick look at the trailer — which plays out like a highlight reel of "what not to do with wild animals" — shows this flick isn't for the faint of heart, nor those with animal rights concerns.

But anyone looking for a pulpy cinematic fix needn't feel too guilty, because 10% of ticket grosses from orders placed through Alamo Drafthouse Cinema and other participating theaters will be contributed to the Will Rogers Motion Picture Pioneers Foundation’s Pioneers Assistance Fund, which is currently providing financial assistance to theater employees furloughed during the coronavirus crisis.


Roar is available for preorder on Vimeo and the Alamo Drafthouse website. The rental will be available to stream for one week starting at 6 p.m. CST on Wednesday, April 15.