May 12, 2020 at 1:14 PM
comment
In addition to the greatest hits of culture and history, museums house tons of hidden gems that often go unnoticed. Inspired by a recent Twitter challenge from the Yorkshire Museum — which requested that institutions share the creepiest objects in their possession — we asked six local museums to show off the strangest and compelling pieces from their collections.

Many people know that Ancient Egyptians mummified animals, but the San Antonio Museum of Art has a particularly interesting feline mummy in its collection.

“Ancient Egyptians not only mummified people, but also animals, especially during later periods of Egyptian history. Although many mummies of mammals, birds, and reptiles were mass produced, new research suggests that some of the animals were mummified with the same elaborate care given to humans,” says Jessica Powers, SAMA’s curator for ancient Mediterranean art.

“With restoration, we discovered that the mummified cat in our collection has a red wrapping over its head, which is very unusual for an animal. Red wrappings were typically found on mummies of priests. The museum’s cat mummy had a rough 2,000 years, but with restoration, it is now looking more like it did when it was entombed. We also determined that the cat was an orange tabby because some of his fur remained!”

Castroville’s Horse-Drawn Hearse, Institute of Texan Cultures
Made in 1898 by the Sayer & Scovill Co. of Cincinnati, OH.

The Institute of Texan Cultures has a fascinating artifact from Texas’ funerary history: a horse-drawn hearse that was used in the town of Castroville from 1919 until around 1930. The secondhand hearse was driven by August L. Tschirhart, who would charge $5 per funeral.

That’s interesting enough on its own, but it turns out the hearse may also be haunted. James Benavides, the institute’s senior communications specialist, shared one spooky story with the Current.

“So, one night, a guard was on duty, making his regular rounds. When he gets to the exhibit floor, he finds the hearse doors open,” Benavides said. “He thought some of the senior officers were playing a joke on him, so he closes the doors and goes about his business.

“Coming up on the end of his night shift, he’s making his last sweep of the exhibit floor and he finds the hearse doors open again. He laughs to himself, then realizes, he was the only person in the building.”

Benavides continued: “The doors don’t open easily; they take two hands to work a latch and pull open. But stories persist, that from time to time, the guards will find the hearse doors open.”

The McNay’s collection features a lot of challenging modern art, but staff say this piece by Jean Tinguely and Eva Aeppli, which recently went on display, is capable of startling in a more visceral way.

The sculpture was fabricated as part of a series by Surrealist artists Jean Tinguely and Eva Aeppli, shortly before Tinguely’s death in 1991, according to the McNay.

“It is a reflection of the artist’s later preoccupation with mortality and combines both artist’s styles and preferred media (Tinguely typically worked with metals and kinetic materials; Eva frequently implemented fiber, masks, and other tactile media in her work),” the museum wrote.

“The sculpture only recently went on view upstairs in the McNay mansion and is the first 3D object by the artist in the Collection. Nonetheless, it can still make you jump upon entering the gallery!”

You know who in town has an Andy Warhol on hand? Bet your first guess wasn’t the Briscoe Western Art Museum, whose collection includes a screenprint by the pop artist based on an iconic image of Geronimo.

The print is part of Warhol’s larger “Cowboys and Indians” series.
“Warhol includes celebrities such as John Wayne and Annie Oakley as well as historical figures like George Armstrong Custer and this image of Geronimo,” the museum told the Current.

“Warhol’s putting these figures in conversation with each other is quite interesting, especially when you notice that it is only the image of Geronimo (taken from an original photograph by Ben Wittick) that looks back, directly at the viewer.”

There are plenty of ancient coins in SAMA's collection, but this one has a notable pedigree.

"This Roman coin from Alexandria, Egypt, bears a portrait of the emperor Nero on one side and his wife Poppaea on the other side. It's made of billon, a mixture of valuable silver with much cheaper copper or copper alloy," said Lynley McAlpine, a postdoctoral curatorial fellow at the museum. 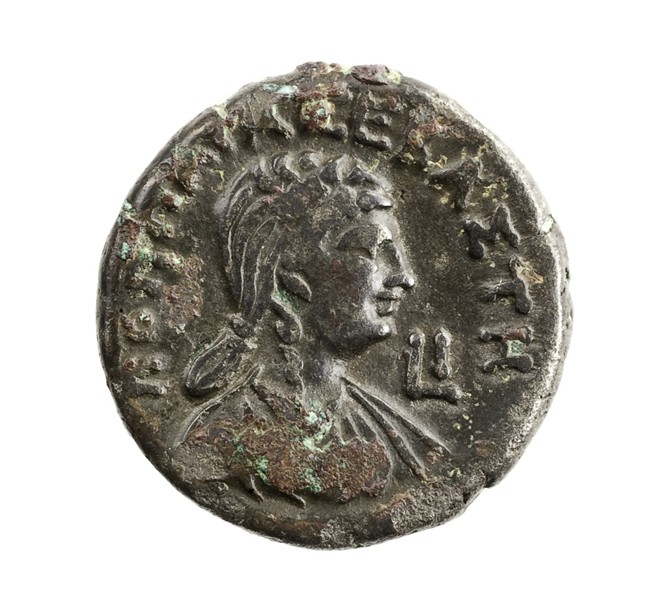 "The Adams family coin collection was started by John Adams, added to by John Quincy Adams, and passed down to Henry Adams — but we don't know exactly who added this particular coin to the collection. Henry Adams donated the entire collection to the Massachusetts Historical Society in 1913.

"In the 1970s, when the Massachusetts Historical Society wanted to make microfilm copies of the Adams family papers, they sold the coin collection to raise money for that project. Eventually it made its way to San Antonio, and it's the only object from the Ancient Mediterranean collection that we know once belonged to a family of U.S. presidents."

The Briscoe also has a pistol with some serious history currently on loan.

"This revolver is not remarkable in and of itself," the museum noted. "It was the weapon of choice for individuals like 'Wild Bill' Hickok, 'Doc' Holliday, and 'Jack' Hays."

"This weapon is interesting because it belonged to a member of a group known as 'The Danites.' William Hickman (also called, but not to be confused with the other Wild Bill) was a member of this group and rode with Porter Rockwell. Rockwell, considered a modern-day Sampson, was (with Hickman) a personal bodyguard to the Mormon prophet Joseph Smith, who told him that if he never cut his hair he could not be killed by an enemy; Rockwell wore his hair and beard long throughout his life.

"Hickman and Rockwell led the party that burned the original Fort Bridger during the Utah War. He was excommunicated from the church in 1868."