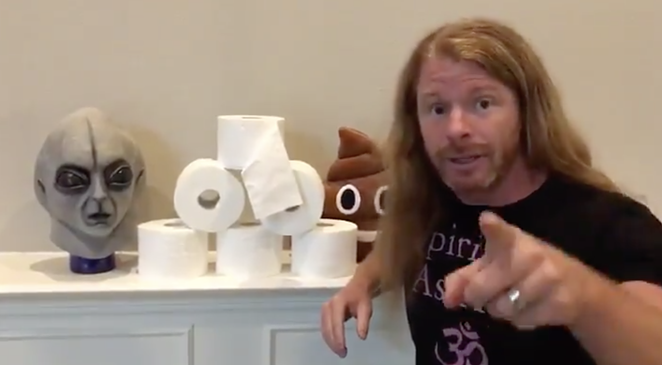 Now that Texas has launched headlong into reopening the state, looks like some performers are champing at the bit to get onstage.

Sears announced the shows in a video posted to Twitter from Austin on Monday, saying, "I'd love to have you come up and join me for a night of laughs if you feel like that's in your best interest.

"But if you feel like you still wanna be socially distancing, awesome," he demurred. "Catch me the next time I'm in town."

We’re doing it San Antonio! Shows this Friday, Saturday, and Sunday at @SanAntonioLOL Limited seating for all shows. Cowboy up! Grab your tickets here: https://t.co/r8Cl9m3gda pic.twitter.com/my7D1s9v3I

Sears rose to YouTube prominence with his "Ultra Spiritual Life" videos, which feature entries like "Using Ayahuasca" and "Enhancing Your Yoga with the Squatty Potty."

While his satirical vids appear to lampoon a particular granola-and-chakras hippy archetype, Sears appears to be down with a fairly enlightened lifestyle himself. In 2016, he told the Sydney Morning Herald, "Everything that I parody in the videos is a part of my life — either now or in the past." Did we mention he's also a life coach?

Even though Sears has posted plenty of pandemic-themed content — as well as hosted livestreams from quarantine — Sears' willingness to travel to the Alamo City to perform in front of a live audience seems to indicate that he's not too worried about the ongoing deadly pandemic.

LOL Comedy Club reopened in mid-May under Texas' guidelines for social distancing protocols. In addition to operating at 50% capacity, the club is taking the temperature of all patrons at the door and encouraging everyone to wear a face mask.

"What we wanna do is ensure that people are safe and go above and beyond what the governor's recommending," club owner Tom Castillo said in an interview with the Current just prior to LOL's reopening.

As part of its social distancing measures, LOL is selling tickets by the table. Available seating for Sears' show is $60 for preferred seating for two and $90 for GA seating for a table of four or six.

After this weekend's shows, Sears plans to take whatever germs he might pick up in San Antonio to Denver; Tacoma, Washington; Tampa, Florida; and other locations across the U.S.