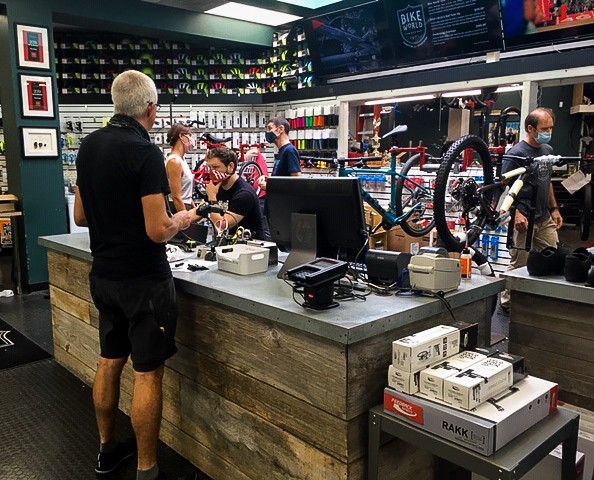 Ten minutes to noon, patrons waited in a crowded parking lot for the signal that Bike World’s Alamo Heights outlet had opened its doors. Some bided time inside idle vehicles, while others stood by outside, holding loose bicycle wheels, fidgeting with broken chains and pacing as they waited for the doors to open.

“Due to COVID-19, our service department is closed until further notice," one sign explained. Another announced the shop was currently unable to answer phone calls and needed to reduce hours in order to cope with “unprecedented demand.”

“This is unlike anything I have ever seen,” Bike World-Alamo Heights Manager Eddie Martinez told the Current.

During Martinez’s ten years with the SA-based retailer, he’s come to expect business to pick up around springtime, but he never predicted the consumer swarm spurred by the coronavirus pandemic.

“I don't think any of us were thinking that bike shops would be in demand, or sought after when all this started,” he said.

Under San Antonio's stay-at-home order, bike shops were deemed essential businesses based on the transportation needs they fulfill. Once the order was released in late March, it was like someone had flipped a light switch, Martinez said.

“All of our departments got flooded,” he explained. “Sales, services and our online store all got busy at the same time.”

Under normal circumstances, business builds in each of the store’s departments on a staggered schedule. Rarely does it happen all together.

And the spike in business isn't specific to that one affluent San Antonio neighborhood.

“This is happening at all Bike Worlds and all bike shops,” Martinez said. "I don't know of any bike shop in the city or state that is not busy.”

Flying Off the Racks

At Bike World’s Alamo Heights location, business got so intense that management made a mid-April decision to temporarily shut down its service department.

“We ran out of room,” Martinez said. “And we couldn’t even start working on the bikes because all we were doing was checking in more bikes all day long. We had to close so we could catch up.”

With services such as tube replacement, chain installation and gear adjustment unavailable, customers oriented their spending into the sales department, according to Martinez. During previous springs, the shop sold 30 to 45 bikes weekly. Since the stay-at-home order, that number has been between 200 and 300.

Before Bike World's service department got overwhelmed, Martinez said many of those coming in for repair were covered with the kind of dust that collected while sitting unused in a garage for years.

“Now that nobody has anything to do, they are wanting to drag out old bikes and get them fixed,” he said. 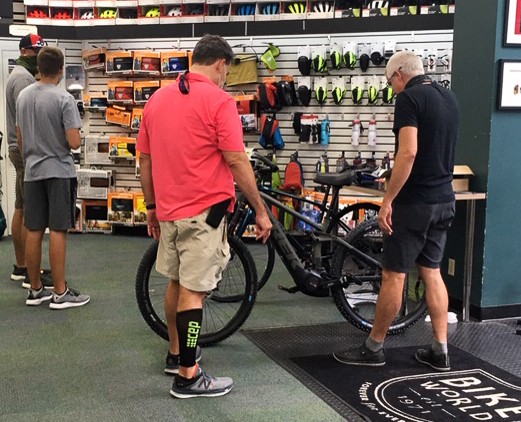 During the current bike boom, distributers have run out of product all over the country, Martinez said. Apparently, manufacturers can’t keep up with demand.

Clay Williams, owner of San Antonio Bike Shop, a small retailer on Broadway near the Pearl, said he’s sold every bike in his inventory. His store is predominately a dealer in Kona Bikes, and at press time, that manufacturer is sold out of all bikes except those running $2,000 and more, he added.

“It is a good thing to an extent, but the well is going dry,” Williams told the Current.

Sales since during the pandemic have already outstripped the Christmas season, typically SA Bike Shop’s busiest time of year.

Martinez’s employees at Bike World have been working overtime and forgoing days off to keep up with the crush of customers.

“With everybody riding in the world right now, I can tell you who is not riding — it is the people in the bike industry,” he added. “When you get off a 12-hour shift, the last thing you want to do is go kill it for 30 miles on your bike.”

While all other Bike World service departments remain closed, the Alamo Heights location finally resumed taking on new work last week, although with some limitations. The store also readjusted its hours back to its original opening time, but it’s still only answering phone calls as when it can.

For Martinez, the hustle is bittersweet.

“None of us feel like gloating because people are going through really hard times right now. If there was no global pandemic going on, we would all just be enjoying ourselves a bit more.”