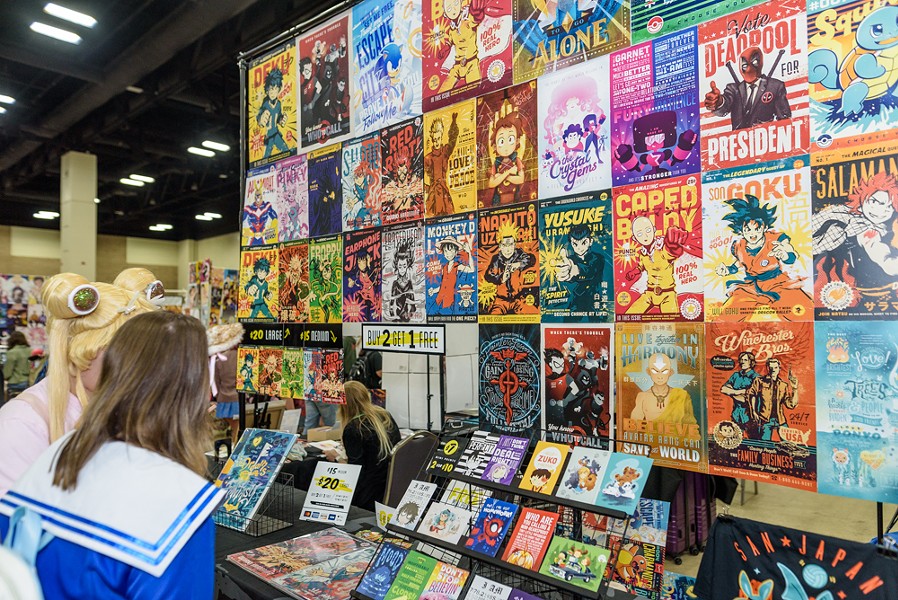 The Amp Room isn't the only one showing its whole ass on Twitter right now.

Last week, San Japan honcho Dave Henkin faced a tsunami of backlash over a racist tweet explaining why the longtime anime convention doesn't book more people of color as guests. He subsequently issued a Facebook apology and resigned as chairman of the event.

"We got tagged asking why we don't bring out POC industry [sic]," reads a screenshot of a tweet posted early Thursday from Henkin's private personal account @Proz.

"I'll tell you why. We get tagged and constantly requested to book sexual predators and popular asshole divas. That's what people want to throw their money [sic]. Show up by the hundreds with cash to see POC then I'll book them." 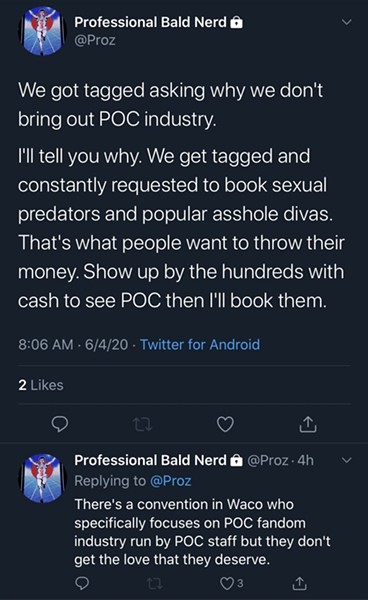 "This is the owner of San Japan, a popular Texas con," anime voice actress and Texas native Megan Shipman posted along with a screenshot of the offending tweet.

She continued: "This is what they are saying privately in response to why they don’t invite POC guests to San Japan. This thinking is extremely flawed and should be reconsidered."

"This is a vivid example of soft racism," Tim Eldred tweeted in response to Shipman. "You can live a non-racist life, but still serve a racist agenda by bending to it. You can claim it's the only way to be successful in your environment. But what kind of success is it when you compromise away your soul?"

On Thursday afternoon, Henkin took to Facebook to apologize in a public post on his personal page.

"I am an idiot," his post reads. "I was trying to express frustration with the difficulty of marketing POC guests to large sections of the fandom that request the same milquetoast celebrities that are already at every other show.

"I realize I speak from a position of privilege as a white man and vow to be a better ally in the future. I'm sorry."

However, his apology rang false to many, including other employees of the con. On Thursday evening, San Japan Cosplay Director Emma Glover posted a statement on Facebook announcing her team's resignation from the event. She added that Henkin's comment was one incident in a pattern of behavior rather than a single mistake.

"In light of recent public comments by the convention chair, my cosplay staff and I have chosen to collectively resign from San Japan," Glover said.

"I want to make it clear that it was not this comment alone that made our decision. Some of my staff members have truly terrible personal experiences that they have set aside to continue working for the convention we love," she continued.

"My staff and I have consistently made it a point to consider diversity when considering cosplay guests, which we source. That dedication was often answered with a feeling of being de-prioritized, belittled or ignored. This is simply the final straw."

At the same time, people spread the word on Twitter that vendors in the con's Artist Alley still had until June 10 to take advantage of a full refund for table fees should they want to back out in protest.

On Saturday, San Japan organizers posted a statement across the con's social media platforms addressing the incident. In the announcement, they said Henkin had resigned, effective immediately.

"This week, our chairman said hurtful and ignorant comments on his personal Twitter account," the statement reads.

"This does not stand with the mission and vision of San Japan. We have only been successful thanks to the hard work and support of our community. We have become one of the top anime conventions in the nation because of people of color and our LGBTQ+ family."

"Dave Henkin will step down as convention chairman and relinquish control to the San Japan board of directors. The board will govern by committee until a long-term solution can be established."

San Japan's statement also outlined ways in which the organization would commit to promoting diversity in the future, including changes to the selection process for celebrity and fandom guests and a review of the contractors that the con works with.

Still, some social media users expressed concern that Henkin's resignation may not fully sever his involvement in San Japan. They requested the con make it clear whether Henkin retains any ownership stake.

"Thank you for listening," voice actress and artist Holly Segarra tweeted. "May I please ask if he's still affiliated with the convention/owns/making any sort of profit off it?"

As of press time, San Japan had yet to post a response.