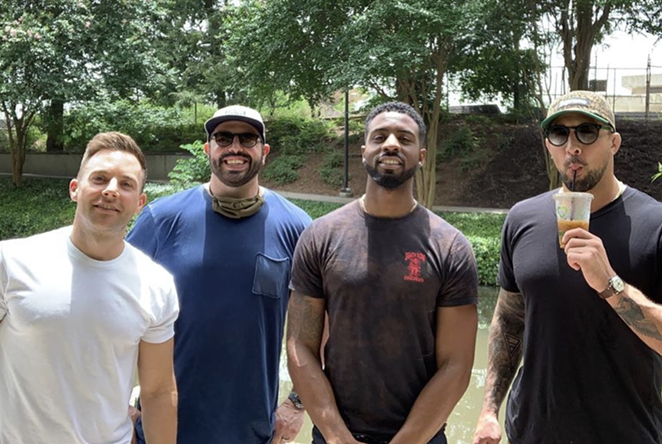 Stand-up comedians Bryan Callen and Brendan Schaub, who performed at the Laugh Out Loud Comedy Club June 25-27, respectively confirmed on the podcast The Fighter & the Kid Thursday and on Instagram Friday that they tested positive for COVID-19 after their San Antonio tour stop.

“We’re morons and went on the tour and stuff,” Schaub said on the podcast. “I was living my life. I got corona. I’m fine. I bunkered down and quarantined, and that’s what it is, man.”

Callen tested negative for the virus earlier this week, but decided to test again because he thought he probably had it. He confirmed his diagnosis Friday morning on social media.

“I tested positive pending for COVID-19 guys,” Callen posted. “If you first [sic] bumped me or took a picture with me in San Antonio please go get tested immediately. I’m told I CAUGHT it there because I tested NEGATIVE Monday but positive Wednesday. So sorry to report this but had to say something.”

According to the Centers for Disease Control and Prevention, COVID-19 symptoms may appear between two and 14 days after exposure to the virus.
On their podcast, Callen described his and Schaub’s behavior in San Antonio as that of “real irresponsible assholes.”


“Brendan and I did everything wrong in Texas,” Callen said on his podcast. “We practiced no social distancing; got up in front of 350 people as they were laughing at us and shouting at us; and then when we got off stage, didn’t change mics and shared it with Malik [Bazille] and Stevie [Blue Eyes]. Stevie is sick as a fucking dog.”

Stand-up comedians Malik Bazille and Stevie Blue Eyes also performed at LOL with Callen and Schaub. Callen said Stevie, who is a cancer survivor, is now the “COVID poster boy” and has “lost his sense of taste [and] smell.”

The Current reached out to Stevie to see if he has been tested for COVID-19 and to Bazille to ask about his health. It hasn't received a response from either.

Callen said on Saturday, before the comedians' final gig at LOL, they got an alert on their cell phones that warned them of the rising cases of COVID-19 in Bexar County. The message from the San Antonio Office of Emergency Management read, “Stay home. The COVID-19 virus is spreading rapidly across Bexar County.”

“We had to do a show,” Callen said. “That’s the other thing about being a comic. We sold a lot of tickets. I gotta do the show.”

Callen said that after he and Schaub got off the stage at the LOL, they walked through a group of people cheering at them and giving them fist bumps. As a comedian, catching COVID-19 was probably already in the cards, he said.

During their podcast, Callen said he hopes his second COVID-19 test “comes back positive,” because he “wants to get it, so he doesn’t have to worry about it.” As of early July, scientists still don't know whether humans can be infected with COVID-19 a second time or how long their immunity response lasts after they're infected the first time.

For weeks, Schaub and Callen have downplayed COVID-19. They even went as far as agreeing with one another on their podcast that it's a “proven fact” that the “sun kills the virus.” On June 9, Schaub tweeted that “cases don’t matter only deaths. Figure it the f*ck out or hide in your house while everyone else is back to normal.”

Cases 👏🏻 don’t 👏🏻 matter 👏🏻 only deaths. Figure it the f*ck out or hide in your house while everyone else is back to normal. EDUCATE yourselves and look at the trend of declining deaths. 7000 people die in American every day NOT from corona. There was 600 deaths due to corona https://t.co/biaFWR75Xu


On the podcast King and the Sting back in March, Schaub said face masks “don’t protect against the coronavirus” and asked, “Who has corona more than anybody? All them Asians.” He also said, “We need somebody we know to catch this virus to see how real it is.”

Twitter followers who kept up with Schaub’s apathetic view on COVID-19 pounced.

“Well on the plus side you [sic] standup is finally capable of killing,” wrote @beatsbeingsusp1. Twitter user @KSlice83 wrote, “Anyone who has been in an American Eagle store in the last 3 months needs to get tested immediately.”


LOL’s website includes a section devoted to its COVID-19 policy, which states that all patrons are required to “wear a mask when they are not eating or drinking.”

“Customers who refuse to wear a mask will not be allowed to enter,” the statement reads. “Our facilities are cleaned and sanitized between shows. Additionally, commonly touched surfaces such as doors are regularly and frequently cleaned and disinfected.”

On Thursday, Gov. Greg Abbott issued a statewide mask mandate. This means Texans who live in a county with more than 20 COVID-19 cases are now required to wear a face covering while inside businesses or public places and outdoors when social distancing is not possible. The mandate went into effect at 12:01 p.m. Friday.

“LOL, like other small minority-owned businesses, are thankful that the Governor and state officials have implemented mandatory face masks in public,” club owner Tom Castillo told the Current this morning via email. “I appreciate the Governor’s leadership. It takes a true leader to make tough decisions like reopening Texas and an even stronger leader to have the humility to accept that he needs to change course.”

With the recent rise of COVID-19 cases, Castillo said he's decided to “take a break this weekend and close operations so our staff can celebrate the Fourth of July at home.”

“I am hopeful that with the recent changes made by the state, the case counts will continue to go down in Bexar County,” Castillo said. “But if they don’t, we may close an additional week. I want to believe the Governor’s new actions will help to reduce the COVID-19 numbers in Texas over the next month.”

He added that “young people’s behavior in recent weeks has led to the rise in cases.”

“You don’t have to be a rocket scientist to recognize that,” Castillo said. “If you listen and follow Brendan’s group, you would have heard him and other comics acknowledge their personal choices (like not wearing masks in public) have led to an increased exposure to COVID-19.”

Comedian Felipe Esparza recently postponed his July 3-5 tour stop at LOL and cited COVID-19 as the reason on his Instagram account. According to the club's website, the next stand-up comedian scheduled to perform is JP Sears on July 15.