On July 18, it will have been a half century since the "Great (Little) Train Robbery" of the Brackenridge Eagle.

In the summer of 1970, two masked men jumped out of the brush in San Antonio's Brackenridge Park and demanded the valuables of 75 passengers riding the park's mini-train. The robbery was initially thought to be a joke or staged performance, but it soon became apparent it was a real stickup.

The Brackenridge Eagle, now known as the San Antonio Zoo Eagle, was chugging along its usual path on the afternoon of Saturday, July 18 when it was interrupted by the pair of bandits, one armed with a revolver.

"I laughed at the man with the pistol," rider C.A. Berndt told the San Antonio Express-News at the time. "The robber had just grabbed the man in front of me by the neck when he refused to turn over his wallet, but nobody took him seriously."

That changed once one of the men grabbed the purse from Berndt's wife and continued down the train.

Before it was over, the thieves had collected $500 in cash and other items in pillowcases. They also made off with car keys, checkbooks and credit cards. 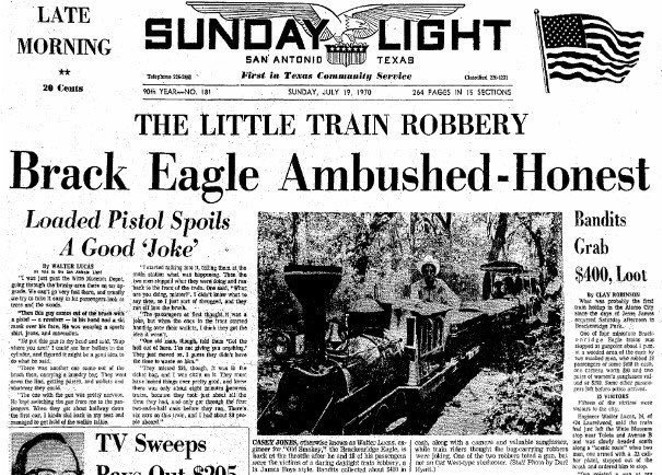 Once the men were a few feet away, train engineer Walter Lucas called for help with a walkie-talkie, according to the Express-News' account.

According to an article in the July 28, 1970 issue of the San Antonio Light newspaper, the two culprits were identified as soldiers stationed at Fort Sam Houston. One of the men, Sgt. E-5 Paul Smith, then 21, was arrested on a warrant for a separate holdup of the Lone Star Ice and Food Store off West Avenue. The second unnamed bandit was also arrested, but not immediately charged.

Some of the stolen belongings, such as purses and wallets, were recovered by police and the Army Criminal Investigation Division officers. The stolen cash, however, remained unaccounted for.

The two men were later sentenced to prison for the train stickup.