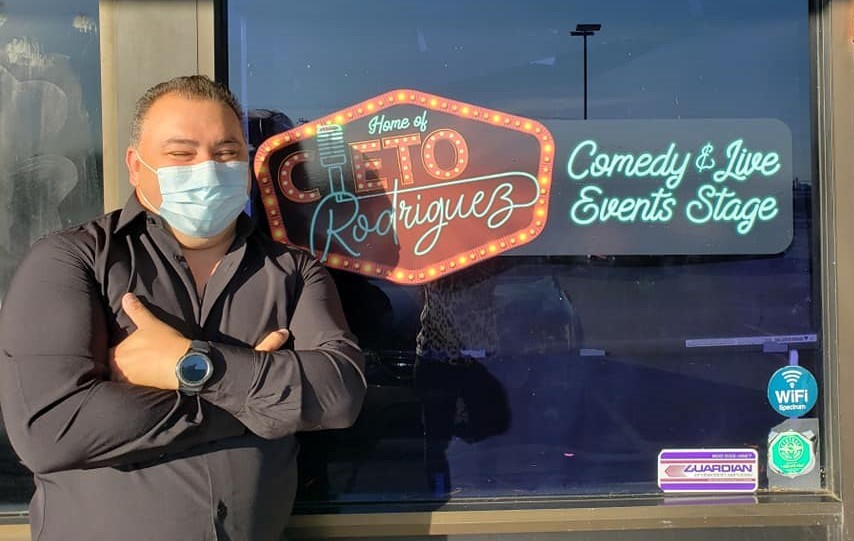 The grind never stops. It is a personal motto comic Clifton Simmons has been living by his entire career. Hitting center stage to deliver a stand-up comedy performance is something Simmons does not want to give up – even during a pandemic.

With fewer venues hiring comedians for gigs over the last five months, Simmons has found alternative ways to keep the laughs going, including performing comedy shows in people’s backyards, living rooms and garages and at restaurants like Little Italy on the city’s North Side.

“This pandemic has brought out the inner hustler in me,” said Simmons, adding that he follows all CDC guidelines when he performs like social distancing. “It’s made me think strategically. Just because the comedy stopped doesn’t mean I have to. People need laughter and inspiration and entertainment right now.”

Unlike live music, stage productions and other arts performances that have cancelled events across San Antonio, many stand-up comedians are not letting the fact that local COVID-19 cases are still widespread stop them from seeking out an audience. As of August 9, San Antonio's Metro Health has reported 42,873 cases and 445 deaths.

Earlier this year, Mexican restaurant Las Chiladas offered comic and news personality Cleto Rodriguez his own stage to perform and book other comedy acts. When pandemic cases started increasing across Texas, Rodriguez and the restaurant’s owner decided to put a pause on their long-term plans.

“The pandemic was unexpected and put the kibosh on everything,” Rodriguez said. “But even with the shows we did have, we started to get backlash. You would’ve thought I went to China and brought the coronavirus back myself. So, we just decided we should wait it out.”

Jokester’s 22 owner Marsha Mahaffey initially planned to wait out the pandemic, too. When it became obvious that the virus was going to be around for a lot longer than people thought, Mahaffey said she had no choice but to reopen her venue, while following state guidelines on COVID-19, or risk closing her comedy club permanently.

“I was getting little financial help from the government, so I made the decision to open up and follow all the rules or I was going to have to file for bankruptcy,” Mahaffey said. “I’m doing what I have to do as a business owner. I’m not trying to get rich off this. I’m just trying to pay my bills.”

In late June, nationally recognized stand-up comedians Bryan Callen and Brendan Schaub tested positive for COVID-19 after a tour stop at the Laugh Out Loud Comedy Club. Mahaffey is not really worried, however, since she is “being extremely strict on social distancing and making customers wear their masks.”

“Getting sick isn’t limited to a comedy club,” she said. “You can get sick anywhere, so that’s why you have to take precautions. That’s why I’m making sure everything is done correctly for everyone’s safety.”

As a comedian, Larry Garza understands the importance of making a living and empathizes with his fellow comics who are having a difficult time booking jobs during the pandemic. As someone who is immune compromised, however, his health and the health of those he loves means a lot more. He does not put a lot of faith in people when he sees them being dismissive about the virus.

“Protecting myself and my family take priority over everything I do,” he said. “If we had a society that was courteous and responsible enough to maintain social distancing, wear masks and understand their family dynamic to not endanger the elderly and immune compromised they impact, then go for it. The sad fact is, we don’t.”

For comedian Tori Pool, it is upsetting to her when she sees fellow comics post on social media about “performing in close quarters” like restaurants and living rooms. Pool plans to perform at an outdoor event soon, but she dismisses the idea that laughter is necessary right now.

“[Comedians] often seek the stage for that feeling – the rush of adrenaline when a joke lands,” she said. “I get it. But we don’t need comedy. We need another stimulus, support from leaders and food and job security. How do you explain to someone that is so emotionally invested in themselves and their grind to think about everyone else? I’m not sure.”

Comic Jay Whitecotton feels there are more pressing issues when it comes to the nation’s health than comedy shows. The “corrupt and outright dangerous mismanagement” of the pandemic by the federal government is not going to be fixed by people “yelling about bad comedy shows run by bad comics.”

“We shouldn’t be distracted arguing over comedy,” he said. “We should be hammering the greedy assholes enriched by lobbyists [who are] abusing and crippling the middle-class and the poor. [Comedy] is just so far down the list that I envy the people who can afford to cry about what’s mostly a hobby for narcissism.”

Still, Whitecotton, who is the founder of the Blind Tiger Comedy Club, has no sympathy for the “frauds and hucksters” in the local comedy scene who would put anyone’s health in jeopardy just to headline a show at a restaurant.

“Most self-professed local comedians are desperate for validation,” he said. “They’d gladly infect your grandmother to get their name advertised as the opener for a plate of chicken parmigiana.”