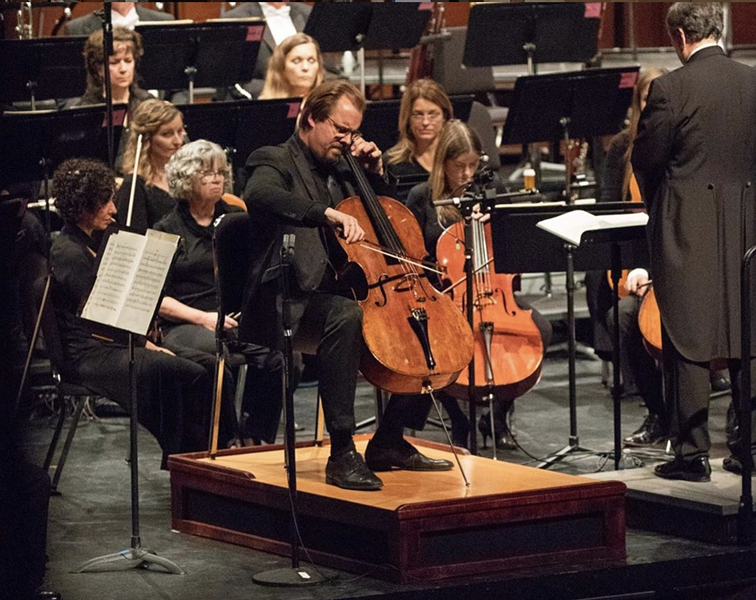 A unique collaboration between two local artists has been showcased in a profile by Texas Public Radio.

During principal cellist of the San Antonio Symphony Ken Freudigman's college days at the Eastman School of Music, one aspect of instrumental performances stood out to him — unlike many other instruments, the cello is doesn't have the ability to elevate its sound over the rest of an ensemble during a solo.

"The piano is up off the floor. The violinists stand when they play, or if there's a trumpet solo, they're all up," he told TPR.

He had originally heard of the podium during his studies 20 years ago at Eastman, but it wasn't until he found the Cat Gut Society, a group of musicians who play acoustic stringed instruments, on the web that he finally tracked down the plans to make one.

After meeting Strazza, who also happens to be a cellist, Freudigman sent him the podium plans. Strazza thought it was not only a "pretty" design, but that it also served an interesting acoustic function.

"This cello podium was unique in the sense that it's an acoustic podium," Strazza told TPR. "It's essentially an acoustic amplifier."


The final result? A rectangular wooden podium that measures five and half feet by three and a half feet and stands about a foot tall.

As a cellist himself, the woodworker has performed using the podium he built, which has also been used by the San Antonio Symphony, Camerata San Antonio and the Youth Orchestras of San Antonio, TPR reports.

Strazza was also recently commissioned to build a cello podium for the Oklahoma City Philharmonic.

"The serendipity of it all was amazing. I mean, it was all the things that I needed to fall into place," Freudigman told TPR. "I suppose I could have found anyone to do it. But Frank is a world class woodworker."