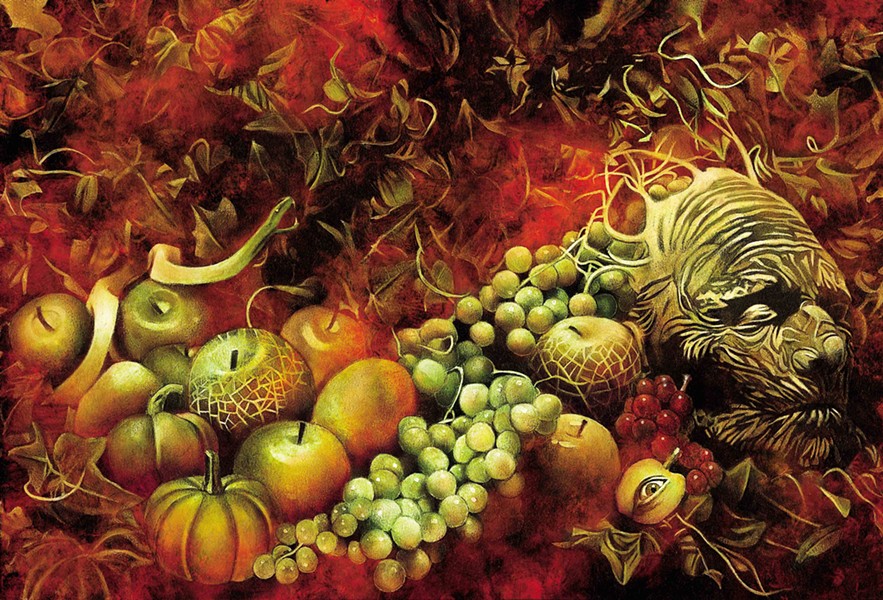 October is a time to close your coat against the chill, to notice that the shadows have grown long and strange, to look over your shoulder and make sure the skitter you heard is just the sound of the wind whipping up dead leaves.
In other words, it’s the perfect time to be scared.

With the Halloween season in mind, we rounded up some of our favorite Texas authors and presented them with the challenge of dreaming up scary tales that clock in at precisely 100 words, including the title. Think of these as bite-sized descents into horror — some eerie, some darkly humorous and some disturbingly close to real life.

Sometimes there’s a blurry spot across the street.
Like a smudged Polaroid in real life. Right near the curvy windows of No. 7.
Jane watches from the stoop of her brownstone, plastic jump rope forgotten, yellow leaves scattering the pavement. A rush of cold hits her face and the sidewalk blurs. Dad’s station wagon fades and the light dims to the orange glow of lamplight. A horse neighs. Silhouettes with top hats and long dresses amble by. One beckons. Jane bolts across to them.
The effect disappears. Jane is gone. The scent of burning coal lingers in the fall air.

KB Rylander writes science fiction and fantasy and young adult fiction. When she’s not writing, you can find her sipping bourbon or playing Lego with her kids, though hopefully not at the same time. Her fiction has appeared in the Magazine of Fantasy and Science Fiction, and she won the 2015 Jim Baen Memorial Short Story Award.

Leaves scuttled through the front door to join a litter of glass from the shattered TV screen. Drops of smashed Jack o’ Lantern dripped from the wall, adding to the disorder.

The creature the children had summoned watched the blaze on the hearth. The thing was tall, emaciated, with enormous, crimson eyes. It clicked its small pointed teeth together. Amid the fire rested the spirit board through which it had passed, now burnt and curled beyond recognition. Lifting a chocolate to its lips, it bit down and gazed despondently into the flames, wondering how it would ever get home again.

Lee Thomas is a Bram Stoker Award- and two-time Lambda Literary Award-winning author of more than 30 books. His work has been translated into multiple languages and optioned for film.

You & Me
By Max Booth III

There is a shadow on the wall that belongs to nothing. Sometimes when you move, it also moves, but sometimes it doesn’t. Sometimes it laughs without making a sound. You don’t want to know what’s so funny. When you sleep it watches, waiting for something. There is a shadow and it is corrupting your brain. Its presence is like nuclear radiation. Your skin is on fire and your eyes won’t stop bleeding. One of these days you’re going to open your mouth and let it escape inside you. One of these days you’re going to be free.

We Didn’t Always Have the Checkpoints
by Clayton Hackett

Not here anyway. At the border, yeah, but I can’t remember when they started here.
What? No, officer. Sorry, I was just thinking.
Yeah, born here.
Consent to search? Does it matter if I don’t?
Sorry, didn’t mean anything by it.
Yeah, I know him, but how did…
My messages?
Why flagged?
Yes, of course I’ll step out of the vehicle.
I don’t know what that is. You just dropped it—
I didn’t, you just put it there…
Why are you taking me?
OK, OK, I’ll lie down!
Ow! Oh God, please no!
Stop!

Clayton Hackett is an attorney and short fiction writer whose work has appeared in Daily Science Fiction and the Amazon.com best-selling anthology Alternative Apocalypse from B-Cubed Press. Previously, he has been an English teacher, photographer and alligator wrangler. He lives in San Antonio with his wife and children.

How could she have been so stupid? She sat, looking at her swollen purple ankle, knowing she wouldn’t be able to get up. Falling down the stairs of her basement had been pure carelessness. If only John hadn’t left her. If only she hadn’t decided to repair the house by herself. If only. The last two days had been hell, waiting for someone to answer her weak cries, hearing the shadows scuttle in the corners. The tears started falling as night crept in again. The whispers of death swirled in her ears. And then the rats began to nibble.

Lori Michelle is the co-owner of Perpetual Motion Machine Publishing and the editor-in-chief of Dark Moon Digest magazine. She formats books for several publishers and freelancers. In the evening, she is Ms. Lori, dance teacher extraordinaire. She lives in Cibolo with her life partner, daughter, son and two dogs. www.theauthorsalley.com

A breath, desperate and ragged, sucked through moist passages.
Next, a pause, all too fleeting.
Then, the inevitable exhalation, a sighing, world-weary wheeze, warm and spent.
Always, she waited, hoping the subsequent intake of air would not come. But it did. Every damn time. She’d told him his labored breathing was a nuisance, yet he refused to breathe quieter, for Pete’s sake.
This was not the retirement she had envisioned.
In the end, the act took so little, she was sorry she hadn’t done it sooner. It was briefly awful, then blissfully silent. Whoever said you can’t change other people?

R.L. Ugolini writes angry fiction and yells at her plants. Her work appears mostly in out-of-print journals and with defunct publishers, but some anthologies including her horror stories may still be found on Amazon, if you dare to look.

The Cure
By Sanford Allen

The woman entered the Fungus Man’s dank cave, a child cradled in her arms.
“My boy is dying,” she told the hunkered, misshapen figure. “Please help. They say your magic is strong.”
The Fungus Man lumbered closer, tilting his toadstool of a head to inspect the boy. “So, you want me to cure him of this human disease?”
The woman nodded.
The Fungus Man opened his slitted mouth and exhaled an ochre cloud of spores. The boy’s skin grew fibrous and mottled, his head warped, stretching into a mushroom cap. The woman screamed.
“Is that not what you asked for?”

Sanford Allen’s alter ego edits an alternative media publication. His short stories have appeared in anthologies that have won or been nominated for the Bram Stoker Award. He’s also the author of the historical horror novel Deadly Passage.

Everyone Looks the Same in the Dark
By Michelle Muenzler

...is what she said, laughing, just before the cracking whine of a blown transformer snuffed out all the lights. Then there was nothing but rain heaving fist-like against the windowpanes and the high whistle of wind bending low the barely visible trees surrounding the property.
“Is that so?” I tried laughing too, but the pressure of something thick — slimy and toothed — circling my waist cut short the attempt.
I’d wondered what kind of woman picks up a complete stranger off the interstate just before a storm...
I didn’t have to wonder anymore.

Michelle Muenzler, known at local conventions as “The Cookie Lady,” writes fiction both dark and strange to counterbalance the sweetness of her baking. Her short fiction and poetry are hidden in numerous science fiction, fantasy and horror magazines, but the links at michellemuenzler.com will help you to unearth them.