Halloween has passed, yet the daily horror that all Americans have been living with since February persists. And I only have one thought: "Dear world, please don’t end. There are too many good movies coming out soon."

As a prolonged global pandemic keeps movie theaters shuttered and millions of people still sheltering in place, an annual rite of passage for movie lovers, the ever-expanding genre film festival circuit, has managed to remain vital by completely upending and revamping the way new feature films gain notice and acclaim prior to their expected release.

Creative Loafing Tampa Bay and BVB: Blood Violence and Babes have been actively participating in the festival circuit for weeks, and we can report that while the real world is still scary as hell, so too are a slew of upcoming horror, science fiction and cult-classic contenders.

From Screamfest Horror Film Festival to Nightstream and the 2020 Virtual Cinequest Film Festival, we’ve had the opportunity to sample some of the best, and brightest.

Enjoy this sneak peek at nine new movies guaranteed to be at the top of your must-see list, and also make note of the titles that are already available to watch via subscription streaming platforms like Shudder.

“Bloody Hell” is basically the most hellish, nightmarish reply someone could ever give to the age-old question that new couples often receive, ‘So, how did you two meet each other?’

As an adrenaline blast of unbridled creativity and limitless ambition, “Bloody Hell” is nothing short of brilliant. And, for first-time feature screenwriter Robert Benjamin, it’s the kind of masterpiece that defines a wordsmith’s legacy.

So, what’s “Bloody Hell” about? It’s about Rex (Ben O’Toole), the kind of uber-confident stereotype you typically only see in action movies, who foils a bank robbery, becomes internet famous, goes to prison and eventually flees to Finland seeking anonymity only to discover a sinister cabal worse than paparazzi. Thankfully, there’s also a girl, not to mention Rex’s iD that manifests frequently to provide hysterical commentary.

Anything for Jackson
4 star(s), 97 minutes, Canada

After a career spent playing eccentric, often iconic characters, Julian Richings (Death in “Supernatural”) and Sheila McCarthy (“The Umbrella Academy”) take top billing in “Anything for Jackson,” a wholly original take on Satanists and human sacrifices from director Justin G. Dyck and writer Keith Cooper, whose respective IMDb resumes read like the greatest holiday hits of The Hallmark Channel. Defying all odds, Dyck and Cooper have concocted a ridiculously awesome descent into the depths of Hell itself. “Anything for Jackson” works on every level, whether summoning demons or unleashing a slew of spectral spirits the likes of which haven’t been seen since “13 Ghosts.” Much like “Bloody Hell,” this one stayed fresh in our mind and imagination for days.

As an early Christmas present, "Anything for Jackson" is slated to debut Dec. 3, 2020 exclusively on Shudder.

If not for the pandemic, 2020 otherwise would be known as the year of Brea Grant. Since January, Grant has been everywhere, co-starring in “After Midnight,” writing and directing “12 Hour Shift” and writing and starring in “Lucky,” the third film by director Natasha Kermani (“Imitation Girl”). “Lucky” is unlike any movie you’ve likely ever seen. It’s essentially a feminist sledgehammer designed to decimate long-standing tropes in genre cinema regarding women in peril, and Grant is magnetic in the lead role as May, a married woman who is assaulted every night by an unknown male predator. The dialogue is as crisp, insightful and razor sharp as anything Aaron Sorkin ever dreamed of putting to paper. In lesser hands, “Lucky” might not have been able to support the weight of its concept, but between Grant and Kermani, the story soars. My only gripe is the ending, which may make better sense upon a repeat viewing, but at first blush left me wanting a more decisive denouement. 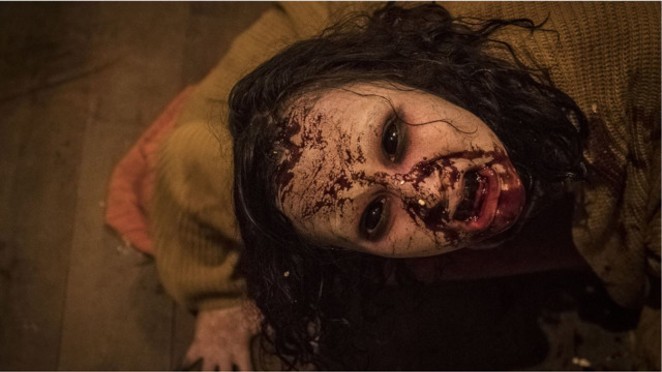 May the Devil Take You Too
4 star(s), 110 minutes, Indonesia, now streaming on Shudder

If by chance you don’t know Indonesian writer-director Timo Tjahjanto, then consider “May the Devil Take You Too” as your gateway drug to his particular brand of visceral action and unbelievable gore. Tjahjanto (“Killers,” “The ABC’s of Death,” “V/H/S/ 2”) has basically remade “Evil Dead 2: Dead by Dawn,” and as one of the world’s biggest “Evil Dead” fans, I’m not complaining. Essentially a straight sequel to 2018’s “May the Devil Take You,” Tjahjanto goes for broke here, leaving nothing on the table unused. Creepy cellar door in the middle of the family room? Check. Possessed characters flying around with enhanced strength? Check. A protagonist who loses a limb, only to have it replaced with a superior weapon? Check. “May the Devil Take You Too” is a gift to horror fans around the world, an endlessly entertaining descent into utter madness.

A better, scarier, more batshit crazy version of “The Conjuring,” director Albert Pintó’s sophomore feature is one of the best paranormal haunted house thrillers to arrive in years. “32 Malasana Street” unspools slowly at first, carefully establishing its characters and allowing viewers to feel a genuine sense of impending doom that creeps into your system and takes hold. The final 44 minutes is as relentless as any ghost story you’ve ever seen, and Pintó does a masterful job one-upping himself over and over, putting his own spin on familiar tropes and delivering several original jolts.

A bucolic setting in rural Ireland goes a long way toward helping distinguish “Boys from County Hell,” which introduces viewers to a rag-tag group of twenty-somethings trying to find purpose between day labor as part of a road improvement crew and nights spent knocking back pints at the pub. After the crew inadvertently knocks down a stone relic serving to keep an ancient vampire entombed, “Boys from County Hell” pumps the gas toward a gory, unpredictable payoff. 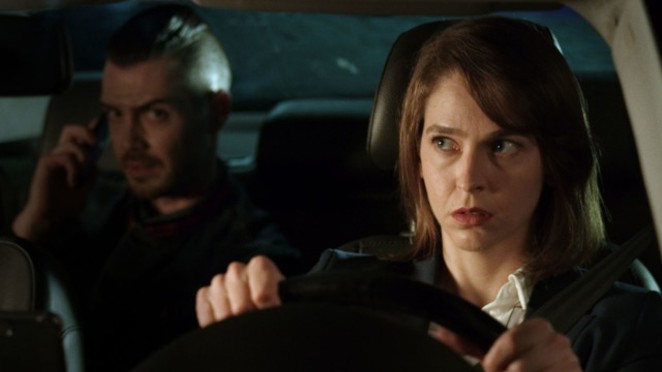 “Fox Hunt Drive” isn’t the first thriller to use the advent of ridesharing as a central plot device, but damn if it’s not the best in its class by far. Drew Walkup’s debut feature nails every element. The characters are compelling, the pace is relentless and the unexpected twist that opens the third act lands with a wallop.

The set-up couldn’t be simpler: Alison (Lizzie Zerebko) is an architect struggling to find full-time work, so she augments her income by driving nights for an Uber-like rideshare service. When she picks up The Passenger (Michael Olavson), he seems nice at first, but then Alison discovers he’s carrying a bag covered in blood and a handgun. As her passenger directs her deeper into his own personal plight, and after a fatal hit-and-run forces them to become co-conspirators, Walkup slyly toys with his audience, exposing new layers to Alison’s backstory and setting up a satisfyingly dark conclusion.

Director Justin McMillan’s debut feature, “Sweet River,” is a harrowing serial killer thriller that distinguishes itself by focusing entirely on the aftermath of a brutal string of child slayings and the impact those snuffed lights have on a rural community. Lisa Kay commands every frame as Hanna, a distraught mother who refuses to abandon the search for her son. She risks everything, including her personal safety, to keep pushing for answers. Thankfully, McMillan and screenwriters Eddie Baroo and Marc Furmie deliver when it counts, creating one of the most unexpected and emotionally satisfying twists that’s ever been deployed in this type of genre thriller.

“Thirst,” the first gay Icelandic vampire film, is many things, but subtle it ain’t. It’s unabashedly gory, unapologetically flamboyant and undeniably original. It’s also hysterical to a fault and likely the most phallic horror movie you will ever see. There are so many penises. So MANY penises. Dicks get ripped off. Dicks get chewed off. One dick even ends up a bun. A hot dick dog, if you will. There are so many penises in “Thirst” that at one point my wife, who was only giving the film her occasional attention, exclaimed: “Every time I look up, I swear to God, there’s a fucking dick. Why is there so much dick?” “Thirst” isn’t a great movie, but it is a great viewing experience. This is why genre cinema festivals exist.

Best of all, for you at home, “Thirst” arrives Dec. 1 on DVD and to rent or buy on major streaming platforms.