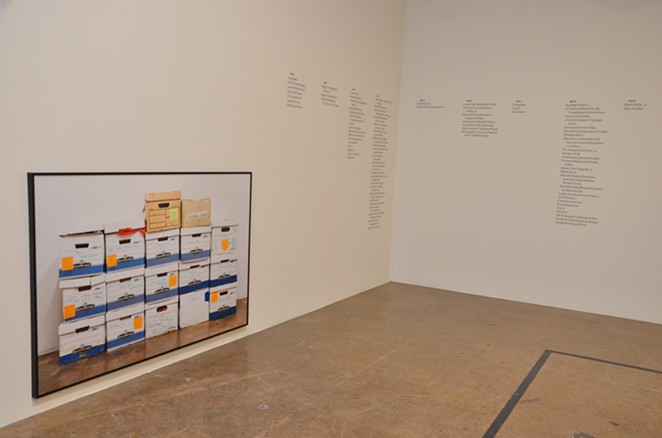 Born in Virginia and raised in a military family that bounced across Central America before settling in San Antonio in 1992, Mark Menjivar took an untraditional path into the realm of art.

After earning degrees in social work and social practice, he spent two years volunteering in Bolivia with a nonprofit providing medical services, meals and childcare for prostitutes.

“The work that I was doing there completely made me change the way that I thought about sacrifice,” Menjivar said. “Because women were selling often the last thing that they had — their own bodies — to be able to provide for their children.”

Returning home feeling burned out, Menjivar found inspiration for his next chapter in an unlikely place: iconic French photographer Henri Cartier-Bresson’s book À Propos de Paris. Fascinated by the collected images, Menjivar set out to teach himself photography. In addition to turning his spare bathroom into a darkroom, he admittedly “made every mistake possible” and “photographed every cliche that you could imagine.”

He eventually found his footing with a series of photographs “examining the interiors of refrigerators in homes across the United States.” Not only did his Refrigerators get exhibited in more than 20 U.S. cities, they set the stage for Menjivar to address food insecurity and hunger while partnering with area nonprofits.

His next endeavor took shape in The Luck Archive, a collection he described as “over 500 objects, photographs and stories that use luck as a starting point to explore belief, culture, superstition and tradition.”

In 2014, Menjivar’s work took a sharp turn sparked by the State of Texas executing the 500th person since the 1976 reinstatement of capital punishment.

“That number — 500 — just started to haunt me,” he said. “[I started] thinking about what that means, living in this state, [explaining] capital punishment to my kids. … And so, I started to do a number of projects around that.”

One of those projects is built around David Lee Powell, an Austin man who was convicted of murdering a police officer in 1978, spent 32 years on death row before he was executed in 2010. Facilitated by a partnership with the Texas After Violence Project — an Austin-based community archive dedicated to “cultivating deeper understandings of the impacts of state-sanctioned violence” — Menjivar gained access to 17 boxes containing Powell’s possessions at the time of his death.

From that archive, Menjivar created DLP Inventory — a powerful text installation and companion photograph currently on view in the Blue Star Contemporary exhibition “Please Form a Straight Line” — and “Birds, Rats, Roses,” a Sala Diaz exhibition that humanizes Powell through official documents, ephemera, a scrapbook-like catalog and a recording of a “Palindromic and Invertible Canon” for piano that Powell composed while on death row.

As a complement to both exhibitions, Menjivar designated an area at Sala Diaz where visitors can affix notes to the walls in response to his work and the complex issues it presents. On December 10, Menjivar will lead an International Human Rights Day Art Walk that begins at Blue Star and culminates with a presentation at Sala Diaz. Registration is required at bluestarcontemporary.org.

We caught up with Menjivar on the Sala Diaz porch to learn more about his Powell project and his role as a resident artist with the Texas After Violence Project. Condensed highlights from the conversation follow.

How did you become involved with the Texas After Violence Project?

In 2014 I started a project working with over 30 high school students at the International School of the Americas to look at capital punishment from really diverse perspectives. One of the ways we did that was by looking at the first person who was executed in Texas after capital punishment was reinstated in 1976. And that was a man named Charlie Brooks Jr. — [he] was also the first person executed by lethal injection in the United States. I connected with the Texas After Violence Project (TAVP) because they have a very large archive of oral histories done over the past 15 years. And two of those oral histories were the sons of Charlie. And so TAVP put me in touch with Charlie Brooks’ sons, and they gave me permission to use the oral histories in the classroom. They also provided me with all the correspondence that they had with their father. It was incredibly powerful for a group of 30 students and myself to begin to use those documents as a way to learn deeper about the capital punishment system here in our state. … TAVP’s beginnings were really rooted in oral histories around the effects of capital punishment. They’ve talked to prosecutors and defense attorneys, families of people who have been executed, families of people who were murdered in a crime where someone was executed. … One of the things I really respect about them is [their] diverse perspective. They’re really trying to provide all of those voices so that we can get a fuller picture of it. Because capital punishment is not black-and-white — it gets into grays. And capital punishment is not just about death. Capital punishment is about class and poverty. It’s about mental health and addiction. It’s about loss. It’s about the legal system. It’s about so many other things.

Does TAVP have an end goal?

They definitely do. They are against the death penalty 100%. There’s no question about that. And I have that same sentiment as well. I don’t hide that at all. In my art practice — and also in my life — I value dialogue over debate. Because I think a dialogue begins with listening, as where debate is trying to convince somebody that you’re right and they’re wrong. Almost all the work that I do and the conversations that I’m hoping to have [are] about listening — and respecting that there’s a wide spectrum of where people sit inside an issue. I think that one of the best ways to have an honest dialogue is being honest about where we’re at. So, I don’t hide the fact that I am against the death penalty. I think it causes great harm to our community and to our state here in Texas. I also respect that it is a really difficult issue, and that people may be at a different place as well. … I’m also for safe communities. When a crime occurs, it’s a tragedy. There are ways that we [can] keep our communities safe that don’t involve executing people.

What does your role as an artist in residence with TAVP entail?

When I came into the role of artist in residence, it was particularly around helping them to activate a couple of archives that had been gifted to the TAVP. And one of those is the contents of the cell of David Lee Powell.

And the first piece you made with the archive is the DLP Inventory that’s on view at Blue Star?

Yes. So, David left his belongings to a filmmaker living in California. And it was his intention that something would be done with the contents of his cell. He came to view his death as a political act, towards the end of his life. [The filmmaker] was not able to complete a project, so she gave David’s possessions to the TAVP. When I learned about that, in thinking about my interest in capital punishment, and working extensively with archives as an art practice, it seemed like a really great fit. I’ve been living with David’s objects for the last four years and the first thing that I did was to make a simple inventory. I went through every box and cataloged every item and just made a text list. I also photographed them as well. … I wasn’t interested in being like “this is David’s alarm clock” or “this is David’s radio” or “this is David’s chess board” or “this is David’s coffee cup.” But I think that the fact that he had a chess board, that he had an alarm clock, he had a coffee cup, I think what it does is it helps me to realize that these are individuals that are on death row. It’s so easy to get lost in numbers or this idea of death row or an execution being something that’s just abstract, that’s hidden away in a far-off place in East Texas. Encountering David’s objects and seeing into his life in this way helped me to humanize that process.

Was the sheet music the most unusual thing you discovered in the boxes?

It’s one of the discoveries that stopped me in my tracks. When I found a fragment of the musical score inside of the envelope, I was like, “What is this?” It made me begin to ask questions and to dig deeper. … And then there’s the paper trail of the music [being played in the courtroom during his final appeal]. … I was trying to find the original tape, [but] nobody had a recording of it. That’s what led me to reach out to composer Richard Castillo here in San Antonio to recreate the piece.

Was Powell a trained musician?

No, he was not trained. David was really a genius. He graduated valedictorian of his high school class at age 16. He was in the honors program at UT Austin. And then he fell into addiction and suffered from mental health issues. And it was in that time period that he was involved in the killing of Ralph Ablanedo.

Powell’s girlfriend, who was with him at the time of the murder, did she end up in jail?

She spent 15 years in jail and is out now. … There are a lot of questions about who pulled the trigger. … In the [exhibition] book you’ll see [a note with the words] “that damn girl.” From the research I was able to find, when they asked Ralph Ablanedo who pulled the trigger … he said “that damn girl.” … David never [blamed her]. It’s a complicated case. … A lot of people, when they find out I work on capital punishment issues, will ask, “What did David do?” There’s curiosity when we ask that question, but also I think [people are asking] if it was justified. Did [he] do something that was so bad that we can justify him being executed? So much of what I’ve been trying to do with this project is to shift that conversation from “What did David do?” to “What are we doing now?” We’ve now executed 570 people since capital punishment got reinstated, and I think it affects our community in so many different ways.