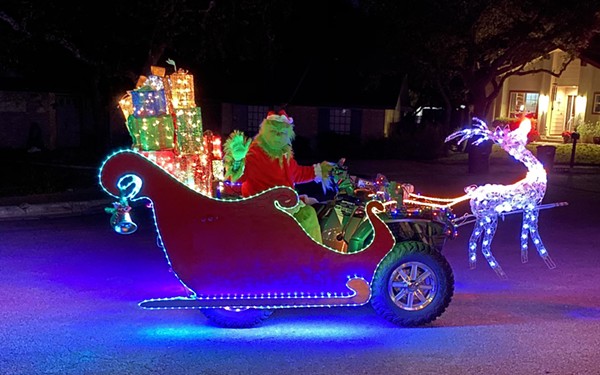 San Antonians are reporting sightings of a Yuletide green cryptid on the Northeast side.

On Thursday, Redditor Thisguy210 posted a photo of children's book character The Grinch — seen driving a sleigh covered in Christmas lights — to the platform's r/sanantonio subreddit.

Though this was the first time Thisguy210 has obtained photographic evidence, it's apparently one of myriad sightings of the Seussical creature, which they report seeing "from 281 and Brook Hollow to Thousand Oaks and Jones Malts."

Other commenters on the post reported additional sightings in the area.

For anyone worried about danger arising from the Grinch — whose heart is notoriously known to be "two sizes two small" — Thisguy210's account seems to indicate that locals needn't be concerned.

"He stopped by while I was helping setup my parent’s house and complimented the theme we had going," they wrote in a comment.

Sounds like San Antonio's Grinch's heart has grown three sizes, after all.