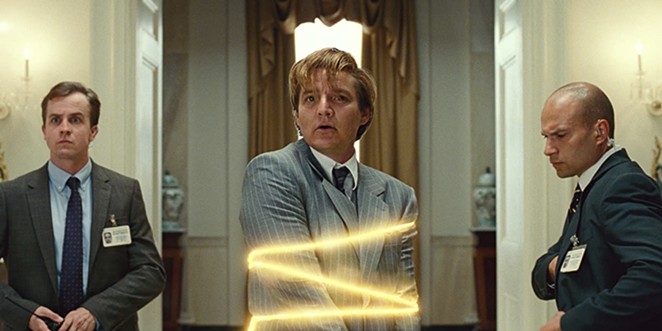 Pedro Pascal, star of TV’s The Mandalorian, spent part of his childhood in San Antonio, this according to an interview with Variety.

It’s where his love for movies began. His parents took him and his older sister to a local theater to see the original 1978 Superman. He was about four years old.

Even though he didn’t finish watching the movie (he went to the bathroom, got lost and ended up falling asleep in another theater), it’s fitting that more than four decades later, Pascal, who was born in Santiago, Chile, would star in his own DC Comics movie, Wonder Woman 1984.

The interview also revealed that his parents escaped Chile in the mid-1970s during Augusto Pinochet’s dictatorship. They brought him and his sister to Denmark before traveling to San Antonio where his father would land a job as a physician.

If he did his homework, his father would take him and his sister to Spurs basketball games. He remembers watching fellow San Antonian Henry Thomas star in E.T. and wished he could be in the movies, too.

“Seeing Christian Bale’s silhouette in a poster for Empire of the Sun and the children in Poltergeist when I was in San Antonio and Henry Thomas in E.T., all around the same age — it’s just like, I want to live those stories,” Pascal told Variety.

In a 2014 interview with actress Sarah Paulson for Interview Magazine, Pascal said that his life in San Antonio “was all about going to movies, rock concerts and Spurs games. And the primary influence in my life was movies.”

Pascal moved from San Antonio to Orange County, California, after the fifth grade. He remembers San Antonio, a city he says he “loved,” as “very multicultural” and remembers being influenced by “Mexico and the Mexican American culture.”

Of course, this is not nearly enough information for us about his life in San Antonio, so the Current has reached out to his representation, so they can tell us more — a lot more.

What elementary school did he go to? What neighborhood did he grow up in? What movie theaters did he frequent? What Blockbuster did he rent VHS from? What grocery store did his mom shop at? Did he know anyone named Mando growing up here? When he was a little boy, did he have a toy Yoda that was small enough to carry around everywhere, and, if so, would he ever call it his Baby Yoda? We want to know everything.

To be continued, Pedro Pascal.