Protesting “the toxicity of machismo” has become a common thread in the work of José Villalobos, an El Paso native who draws creative inspiration from his experiences as a gay man who grew up in an evangelical Christian family embedded in the norteño culture that pervades the U.S.-Mexico border.

After relocating to San Antonio, Villalobos enrolled in a fine arts program at UTSA and earned his BFA in 2016. The same year he graduated, he was among five local artists invited to participate in the Guadalupe Cultural Arts Center’s Artist Lab, a development program facilitated by the New York-based Surdna Foundation. Titled “De la Misma Piel (Of the Same Skin),” Villalobos’ portion of the resulting show comprised tooled leather belts printed with homophobic slurs in Spanish (“jotito,” “mariposa” and “maricón” among them), ornate belt buckles that together spelled out “joto” and paintings of famed Mexican crooner Vicente Fernandez on scraps of leather. In addition to the defiant reclamation of derogatory terms hurled at homosexuals, “De la Misma Piel” introduced multiple themes that continue to distinguish Villalobos’ work: subversion of masculinity, pointed use of text, interventions on vaquero attire and nods to Fernandez — an icon capable of making even macho men cry.

The following year, Villalobos turned heads as part of the Latinx showcase “¡Ahora!” at Austin’s Mexic-Arte Museum. Anchored by a network of cowboy hats spangled with fringe and suspended from the ceiling like chandeliers, his installation “Sin la S (Without the S)” came to life during the opening reception while Villalobos inhabited the space as a flamboyant vaquero in a fringed cowboy hat and Western shirt adorned with the contrasting terms “macho” and “maricón.” 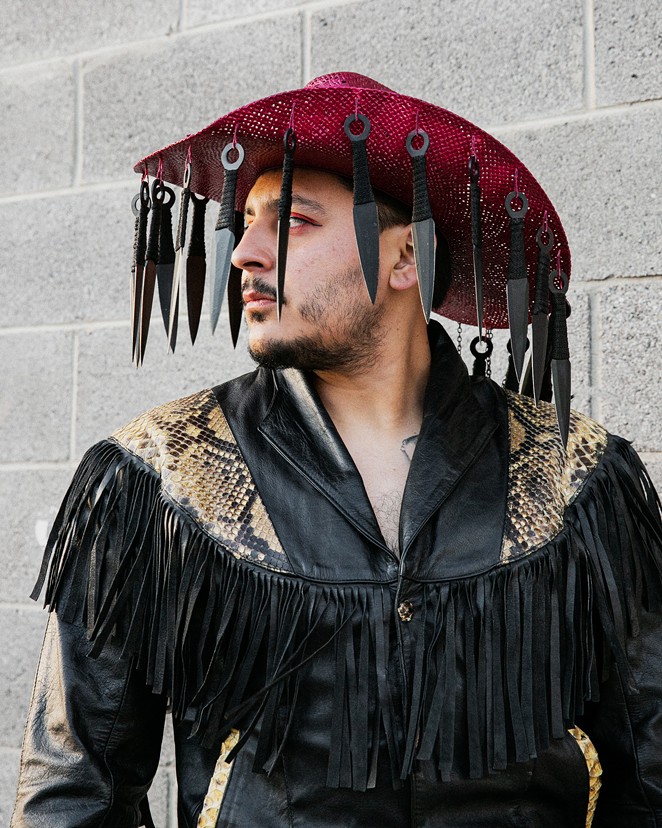 While that live component tied the room together in a fairly lighthearted fashion, Villalobos’ subsequent endeavors have developed into deeper, darker affairs. In the last few years, Villalobos’ performances have involved him sewing the word “hombre” into the palms of his hands with a needle and red thread; stripping down and flogging himself with a leather belt embroidered with the phrase “Las manos de un hombre no debrerían ser suavecitas como este piel (The hands of a man shouldn’t be soft like this skin)”; and getting dragged by a horse — that one hurt, he acknowledges, but “it wasn’t the horse’s fault.” He also pulled a cow’s liver out of his bloodied shirt and stabbed it into the McNay’s floor in a loaded response to Fernandez’s refusal to accept a liver transplant from a potentially gay donor.

Other recent highlights of Villalobos’ impressive career trajectory include a $25,000 Painters and Sculptors grant from the New York-based Joan Mitchell Foundation, an artist residency with that same esteemed institution and “Joto Fronterizo (Border Faggot)” — a survey exhibition that traveled from Albright College in Reading, Pennsylvania, to Texas A&M international University in Laredo.

We caught up with Villalobos to quiz him about “De Los Otros,” a new installation on view in Artpace’s Main Avenue windows through April 25. Evocative of an enigmatic movie set, the installation is built around the true story of a gay farm worker who was part of the Bracero Program that brought millions of Mexican laborers to the United States between 1942 and 1964.

How did you develop the storyline for “De Los Otros”?

I had been reading and doing research, and I became very interested in the history of El Paso and specifically the braceros. The braceros were Mexican farm workers that were contracted by the United States [during] World War II, and the Rio Vista Farm in El Paso was one of the processing centers. You may have seen photographs where the men are being fumigated. When they would cross over, they would go through this very exhausting and tremendous journey just to be able to work here. … I also found out that my grandfather was a bracero [and] was part of that specific program. … I started doing research on queer individuals, because when it comes down to something like that, it’s constantly erased. It took me a while to find specific information [about] queer individuals. Were there any? Did they exist? Of course, we’ve always existed, so how come we never hear this type of recognition? I read an essay by Mireya Loza, who did a series of interviews with a lot of braceros. And there’s a specific man who was known to be gay, and he would cut off the power lines to the barracks in order to lay with other men. In doing so, he [was] maintaining anonymity for both parties. So that’s where this work comes from. In this specific installation, there are two lights that turn on as an indication of non-heteronormative sexual desires. This specific person was known to have a lover. But no one ever knew who it was. So that’s why there are two lights on different beds that light up. I think [this storyline is] very important, because it informs people that queerness has always been around. We’ve always been here, but we’re always struggling to assimilate to a specific environment to protect ourselves. It’s something that we still do today.

Can you describe the installation and tell us how you devised it?

I looked at a lot of different photographs, specifically by Leonard Nadel, a photographer who documented the braceros. … Not all the barracks looked the same. But I saw this one specific [barrack] that was really striking because it was a bunch of wooden bunks just right next to each other, and they weren’t really [large enough to lie down in]. And it was nothing but wood and canvas. That visual was very striking to me, because it’s this time that they have to rest, but it also looks very uncomfortable. They were just bunched up. So, this [installation] is a recreation of those specific bunks. I made them to look like they have been lived in. In the photographs, there were always a lot of pants and hats and shoes. A lot of their belongings would be in cardboard boxes. Very few pillows. They would try to make do with whatever they had. Two of the bunks are embroidered: one reads “tú” and the other reads “yo.” And the piece itself is called Tuyo, which means yours. It’s a play on words that also brings in the story of this specific individual. And the two bunks alternately light up every five seconds. So, the one with the [embroidered] heart has a red border and the other one has a white border. It’s also tying it to this sense of white being pure and red being associated with adultery and sin.

What about the portion behind the bunks?

[On the other side] is a series of farming hoes. The letters at the top that say “Esto es mi ser” are made out of soil, river water from the Rio Grande and cotton from the Rio Vista Farm fields. … The hoes are actually short-handled hoes that they would use, which is very hard on your back. Those are the tools that were given to [braceros]. It’s sad, because they had the ability to provide them with other tools, so it’s like a symbol of oppression. … I like to put this very soft touch to [my] work — bringing in the femininity and flamboyancy — which is why I replaced part of the handle with resin. And encased in the resin are flowers. … Each hoe has cut-out text. All together it says, “Esto es mi ser. Soy uno de los otros. This is who I am. I am one of the others.” So, “the others” was actually a term used for people who were gay or queer or just not normal. … I think that this specific body of work will be developing. I already have ideas of what I want to create to [explore] this idea of what “the others” are. … It’s insane how it’s never seen that a gay person or queer person can do this type of [manual labor].

And you’re going to do a performance in the space?

Yes. We’re planning two performances. One will be a site-specific video performance that will take place in the Rio Grande River in El Paso, maybe around February. The other one will be a live performance at Artpace. The date for that depends on the whole COVID situation.