Evidenced by the curly tailed babirusa (or “pig deer”) scrawled on the wall of a cave in Indonesia, animals have been inspiring art for at least 45,500 years. As the oldest muse on record, critters unsurprisingly boast a fascinating art historical record that includes ancient Egyptian cat sarcophagi; a foreboding dog mosaic in the lost city of Pompei; a veritable menagerie created by German Renaissance kingpin Albrecht Dürer; post-impressionist wildlife paintings by Henri Rousseau; watercolors of every imaginable bird by 19th-century naturalist John James Audubon; anthropomorphic self-portraits by Mexican icon Frida Kahlo; and contemporary interpretations that run the gamut from poppy and playful (Jeff Koons) to controversial and macabre (Damien Hirst).

With obvious exceptions, animal-themed artwork has a knack for lifting our spirits — no small feat in during the pandemic — which is one of the driving forces behind the recently opened exhibition “El Rancho McNay: Animals in the Collection.”

“I wanted to put together an exhibition that was accessible and sort of fun and lighthearted during these difficult times,” McNay Curator of Collections Lyle W. Williams explained. “And the theme of animals immediately popped to mind. Because probably a lot of people don’t know [the McNay] was a working farm back in the 19th century. Animals have always roamed the property.

When Mrs. McNay built her house, there were peacocks and dogs on the patio. … And our founding director John Leeper had a string of pampered cats that lived with him on the property.”

Late El Paso native Luis Jiménez grew up working in his father’s neon sign shop and eventually made a big name for himself with large-scale polychromed fiberglass sculptures that nod to his Mexican heritage as well as low-rider culture, Southwestern iconography and socio-political satire.

A humorous homage to the alligator-filled pond that drew tourists to El Paso’s San Jacinto Plaza from the 1880s to the 1960s, Jiménez’s sculpture Los Lagartos is a beloved landmark that’s featured on Roadside America’s guide to offbeat attractions. Created in tandem with that public art project, his Texas-size print Alligator is puzzled-together at the center.

“You can see it’s printed from two separate stones,” Williams said. “The alligator was so big it wouldn’t fit on one.”

Tragically, Jiménez died in 2006 after a piece of his 32-foot-tall sculpture Blue Mustang, a commission for the Denver International Airport, fell and severed an artery in his leg.

Also hailing from El Paso, San Antonio-based artist and educator Richard Armendariz celebrates hallmarks of the borderlands from his own distinct perspective. Easily recognizable, his work involves using a customized router to carve patterns and imagery into moody landscape paintings.

“When I started traveling more, I realized that the cultural protagonists found in myths and legends are interchangeable,” Armendariz told us. “I enjoy the idea of Saturn [as an] aging buffalo, no longer powerful. [He] ignores the prediction of his dethroning and allows his children to unseat him. The moths, cicadas and grackles pester Saturn, who is unable to fend them off, resigned to his fate.”

During a masked and socially distanced walkthrough of “El Rancho McNay,” Williams shared a bit of trivia that viewers might not pick up on.

“Frank Romero was one of the pioneers of the Chicano art movement in Southern California. His daughter has a work in the show too. It’s nice to have that continuity,” he said.

“She’s interested in the decimation of the bee population,” Williams said. “She likes to bring her Chicana heritage and use printmaking as a socio-political tool to [explore] different issues, especially the environment.”

Born and raised in Mexico and based in San Antonio since 2007, Mora is an accomplished artist and educator known for intricate black-and-white prints inspired by surrealism, science fiction and social satire. Packing in references to stray dogs, classism, the Golden Age of Mexican Cinema and even the charro suit his grandfather wore on Sundays, his Chu Cho Revolucionario depicts a well-dressed canine holding a less-fortunate dog on a leash.

“In Mexico sometimes we call the stray dogs chuchos. Like, ‘Chucho, get out of here! You’re not wanted,’” Mora explained via Zoom. “[This] dog has another dog on a leash. … I’m playing with dogs in a way that represents machismo.” 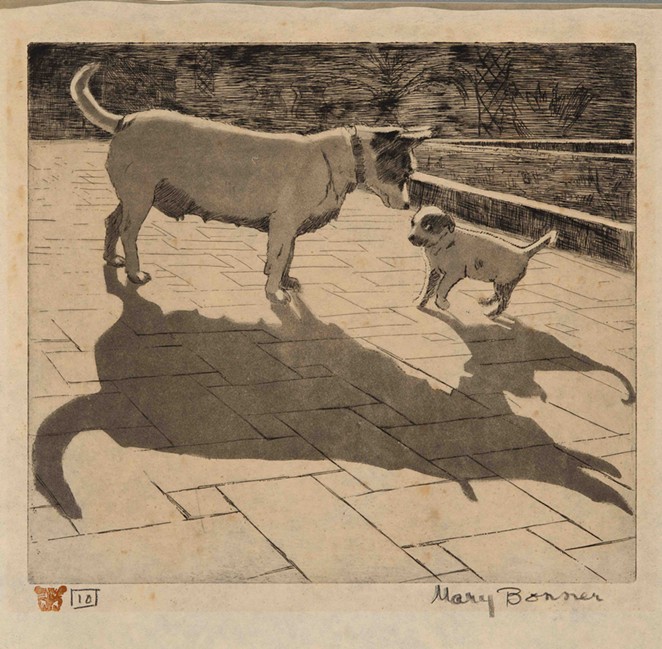 Smartly, Williams used the exhibition as an opportunity to showcase the historical breadth of the McNay’s permanent collection while placing contemporary art in the same context with works by modern master Pablo Picasso, French fauvist Raoul Dufy and early Texas printmaker Mary Bonner.

While it’s always a thrill to inspect a Picasso up close, his four etchings in the show — a cat, a butterfly, a frog and a spider — speak more quietly than Dufy’s eight woodcuts, all gorgeously graphic illustrations taken from Guillaume Apollinaire’s 1911 poetry collection Le Bestiaire ou Cortège d’Orphée. Hailed as “San Antonio’s first fine art printmaker,” Bonner (1887-1935) is perhaps the show’s biggest shoo-in, since her etchings capture Marion Koogler McNay’s beloved dogs, including a playful standoff in the museum’s picturesque courtyard.