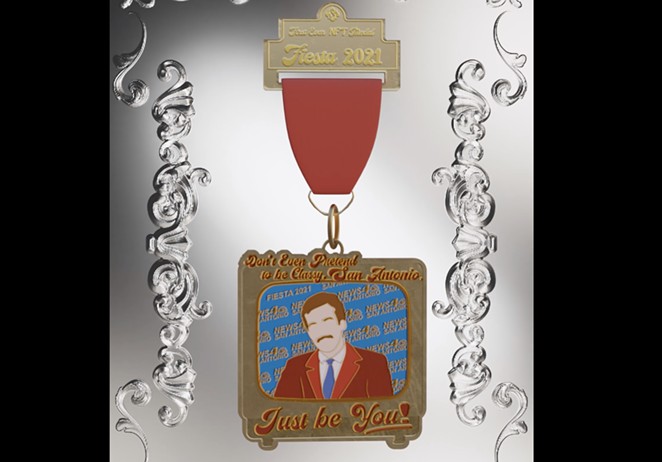 San Antonio-based Fiesta medal maker SA Flavor is betting big on a new technology for a good cause. But not everyone is going to see it that way.

With in-person Fiesta event cancellations racking up for the second year in a row, the medal manufacturer decided to go all in on the latest digital craze: NFTs, or nonfungible tokens. SA Flavor designed a unique Fiesta medal paired with an NFT that it's auctioning off for more than a million dollars in the name of raising money for the San Antonio Food Bank.

On its face, the plan may seem laudable, but NFTs come with baggage.

Invented in 2014, NFTs are intended to be a way for digital artists to "mint" original versions of their artworks and value them accordingly. The technology made a huge splash earlier this year when NFT art started selling at exorbitant prices, with big-name art auction houses like Christie's joining in the fray.

Plenty of ink has been spilled on the myriad issues with the technology by everyone from hyper-online artists to the New York Times, and one of the technology's co-inventors has even weighed in.

Need a quick rundown? Here are a few of the major concerns:
But those concerns haven't stopped SA Flavor from joining the craze.

The company minted an NFT for a "million dollar medal" on Rarible.com that's currently selling for 600 Ethereum, valued at $1,478,598.10 at press time.

The medal, a tribute to retired San Antonio anchorman Randy Beamer, is emblazoned with a quote from Beamer that plays off the film Anchorman: “Don’t even pretend to be classy, San Antonio. Just be you!”

"This medal is truly unique, blending the first ever NFT (non-fungible token) Fiesta Medal on blockchain with a physical manifestation of that medal," according to a press release from the company. "Using the Ethereum ERC-721 standard, SA Flavor created a unique collection called MEDALS and then minted this NFT Fiesta Medal to the blockchain where it can be viewed at www.milliondollarmedal.com."

"The ultra-luxe medal is plated with 24-karat gold, serialized as 1/1 and packaged in a handcrafted walnut box by Richard Grant of Right Hand Woodwork. It has a ribbon topper that proclaims it as the 'First Ever NFT Medal,' and it can be attached to your sash in three different ways to make sure it doesn’t fall off while you’re doing the Chicken Dance at NIOSA."

SA Flavor says it will donate 90% of the net proceeds to the San Antonio Food Bank. The move isn't unprecedented — the New York Times minted one of its columns and sold it for $500,000, donating the proceeds to a Times-affiliated charity.

"As a business built on Fiesta, this year has been incredibly challenging for SA Flavor," SA Flavor founder Garrett Heath said in a statement.. "I’ve been forced to be incredibly scrappy — selling these limited NFT medals made sense given that we've had to celebrate 'virtually' in both 2020 and 2021. These medals not only provide a way to show off during Fiesta and support the Food Bank, they also allow individuals to support a local business."

While we admit that it's not often that an NFT comes bundled with an actual tangible object, the "fine print" visible on the back of the medal may give buyers pause.

"If you purchase this physical medal from someone, be sure to get them to transfer the NFT to your digital wallet to have that token to prove ownership," it reads.

It also appears that Heath himself wasn't completely sold on the concept as recently as last month. On March 24, he tweeted a short thread griping about the transaction process for NFTs.

"These #crypto networks are super unreliable. Have been curious so bid on an NFT — had to spend $12 in 'gas' to get @ethereum from Coinbase to wallet," the thread reads. "Placed bid on @withFND with 16 min to go and transaction failed because 'ran out of gas' (-$17) then placed bid again at 9 min ... when realized it failed. The auction ended before the bid went through, so spent more on 'gas' (-$8). All said and done, spent $40 and don’t even have an ephemeral piece of art. Totally get #NFT/#crypto for proving digital ownership but as a payment gateway has major holes..."

"I guess welcome to the future, huh? Had it been a CC payment the artist would have netted out more, especially if the bidding went into a war," he added.

For what it's worth, SA Food Bank President and CEO Eric Cooper has this to say about the charitable enterprise: "We are honored to partner with SA Flavor again this year, and excited to celebrate Fiesta in this creative way. It has been a difficult year for many in our community, including SA Flavor whose business relies on Fiesta. We are grateful for entrepreneur and owner Garret Heath who, despite the struggle this year, still wants to support the San Antonio Food Bank. Every dollar provides seven meals, so every donation makes an impact."

But if you're the type of moneybags who can drop a mil on some flash for your sash, you might get a better (tax-deductible) bang for your buck by giving the cash to the food bank directly.