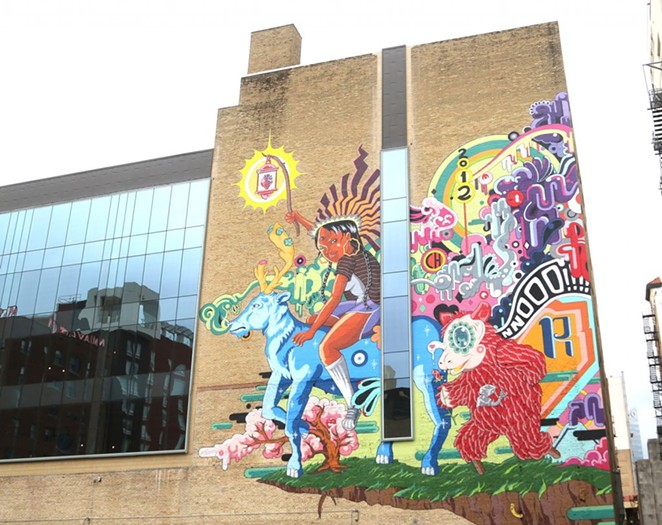 “The Last Parade” by muralist Rudy Herrera is the latest downtown public art project to be completed as part of Centro San Antonio’s “Art Everywhere” initiative. Standing 70 feet wide and roughly 100 feet tall, Herrera portrays integral aspects of his life in vibrant colors, honoring his wife, son and his heritage in the abstract work on the side of the Kress building on East Houston Street.

Symbolism flows through the eclectic colors chosen by Herrera. The mural portrays a Native American woman, her heart as a guiding light, riding a blue deer, which is a common element in indigenous culture, symbolizing medicinal and spiritual rituals.

Herrera wasn’t always an artist. Before pursuing art, he worked at McDonald’s during the day and at Bakery Lorraine on the overnight shift, baking bread in the early mornings.

“I was working … just riding my bike all around town just to get to these two jobs,” Herrera said. “I ended up staying (at Bakery Lorraine) for four years … I was basically a kitchen manager of the overnight shift and second shift, which is mostly bread production.” 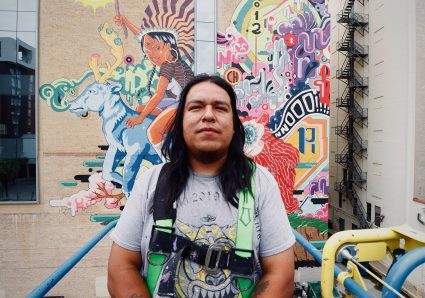 About six years ago, Herrera broke from his culinary career and began working with Chad Carey’s Empty Stomach Group, an umbrella of restaurants that includes Barbaro, Hot Joy and the music venue Paper Tiger. His first mural—a piece for Hot Joy’s Dallas pop-up location, which consisted of an illustration of two men in the midst of a volcano, the words “Hot Joy” painted in an orange and white gradient between them—gave the underground artist the needed push to pursue bigger mural projects.

“They asked me to go do a big old mural, and at the time, that was the biggest mural I had ever done,” Herrera said. “It was like 60 (feet) by 25 feet. They were able to pay me the best that I’ve ever been paid and (gave me) the biggest opportunity I’d ever gotten at that time. That was a turning point for me, because that was the first time where we got money to breathe now. It was a confidence booster, it showed that I could do it on my own. It gave me the confidence to come back (to San Antonio) and try it.”

Once Herrera returned to San Antonio, he took care of his new-born son. The murals nearby his home on the West Side drew his attention, leading him to contact San Anto Cultural Arts, which in turn would bring Herrera under their belt. Herrera assisted with the organization’s summer camp youth program, and created a comic book that would eventually spiral into an offer to assist with the organization’s murals. He lead his first mural in San Antonio, the Southwest Workers Union mural titled “Love is Eastside,” an homage to the indigenous community in San Antonio.

“I pretty much got with them and started volunteering my time, helping out with murals and stuff like that, just cleaning brushes, taking directions, stuff like that,” Herrera said. “Eventually, I got put into an assistant position, and then just by chance, a lead artist dropped out kind of last minute. The whole team was gone and I was left there by chance, so I was able to lead that project.”

“The Last Parade” is based on a sketch he created as he became a new father almost nine years ago. Balancing two jobs and hustling to raise his kid, Herrera took the fulfillment his son gave him and fully embarked on his creative journey. The mural’s initial sketch, originally done in black and white, demonstrated Herrera’s journey as a creative. In order to honor his Native American heritage, Herrera’s choice of colors reflected the spirit and culture of his native tribe—bright yellows, oranges, blue and reds created a harmonious splash of color for the massive mural and its “magic.”

“I was drawing a lot in a sketchbook I kept with me,” said Herrera, 35. “The whole image is a little marching parade off the cliff. I look at that as a creative journey. I think of us as creatives, we have to take that leap at some point. We have to see what’s possible.”

Centro San Antonio’s “Art Everywhere” initiative has allowed the organization to source up-and-coming artists, Herrera included. Murals spread across downtown include works from Lionel Sosa (“Living In My Skin” near the Tobin Center for the Performing Arts, a mural showcasing the stories of 33 Black men in the San Antonio community) and Mark Hogensen (“Untitled” at the Travis Park Plaza). “The Last Parade” is the fourth mural in the “Art Everywhere” series, the first being Kathy Sosa’s vibrant “Keep Calm Et Macar-On” at on the side of the La Boulangerie cafe. Centro aims to have 21 Urban Art Projects by the end of 2021.

“One of the things we had talked about when I joined was that we need more art downtown,” Rodriguez said. “We wanted to put more art up, small things, cool things on walls and in the middle of downtown to make it more interesting, and just beautiful and colorful and tell our stories.”

The goal to showcase more art was fulfilled little by little, highlighting creatives within the San Antonio community. By working with Herrera, Centro’s mission took a turn and brought together various people to hand-paint the mural and make it a reality. San Anto muralists Crystal Tamez, Ana Hernandez and Ashley Alvarez aided Herrera in the process, giving him breaks between painting.

“Rudy’s work was like our North Star,” Rodriguez said. “So many people came together to make this wall happen. It was just this beautiful amalgam of love and passion.”

With the mural, Herrera honored his native roots, alluding to medicinal and spiritual rituals.

“I come from West Texas, from a native tribe over there (the Tigua tribe in El Paso). When the blue deer steps and leaves a piece of peyote, that’s the medicine they use to heal,” Herrera said. “I just wanted to give (an ode) to them. There’s peyotes up there. All that stuff coming out, all that crazy pattern is like the magic from it.”

Herrera’s vision fit in with Rodriguez’s message of expressing one’s self through art—much of the incentive to continue with downtown murals came from the desire to tell the stories of these unknown artists.

Centro is planning to showcase five pieces to tell the story of the Alameda Theatre, Rodriguez said. Built in 1949, the Alameda is a staple of Mexican culture in San Antonio, with a rich history of showcasing movies and Mexican variety shows. The building was acquired by the City of San Antonio in recent years with hopes to restore the Alameda as a performing arts and film venue.

Treating the 100-year-old bricks of the Kress building was important to Herrera in order to maintain the integrity of the building’s workers. The Kress building, built in 1939 as a “five and dime” store and later acquired by the City of San Antonio, was one of the first desegregated lunch counters in the city, paving the way for Black, Hispanic, Native American and Chinese American communities to come together.

“There’s a lot of brown labor in this wall here, I didn’t want to take up too much space,” Herrera said. “I was trying to be conscious of keeping that brick there. I had to go in there and hand paint it. It was almost like a penance, like me paying rent for being here. I wanted to make sure I did it right, you know, respectfully, because not everybody gets what it is to be an artist. At the very least we can all agree it’s a type of craftsmanship and I wanted to acknowledge the kind of craftsmanship that I was going over as well.”

For Herrera, this is just a continuation of the stories that communities of color have to tell.

“The floodgates are opening. I want to see more of this downtown, not by me but by other people. I hope this does this for somebody else. I hope this is somebody else’s start. I hope that somebody can look at something like this and it inspires them to push themselves,” he said. “Understand that there’s a space for us, it’s not crazy. To be a creative, as corny as it sounds, have a little faith in yourself and see what you can do, man. You’ll really surprise yourself.”

Setting It Straight: A previous version of this story misidentified the West Texas tribe Herrera hails from. It’s the Tigua tribe of El Paso.

Valeria Torrealba is studying public relations and business administration at Texas State University, where she also serves as opinion editor of The University Star. Follow her at @valtorrealbaa on Twitter.