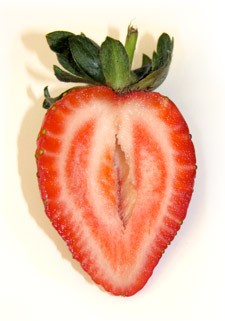 Although Viagra is a recent savior to modern man’s penis, humanity has been looking for a lift for thousands of years. But with no Walgreen’s on every fucking corner, what the hell did they do?

Eat. Food was their sustenance and their medicine.

One of the most commonly known aphrodisiacs today, chocolate, is believed to have been used to boost one’s ‘powers’ since the time of  Montezuma and the Aztec empire. There are various theories as to how the chemicals in chocolate effect the neurotransmitters in our brains, but it is accepted by many to heighten sexual arousal. Like finding yourself lost in the spell of a partner’s pheromones, your brain is affected at such a primal and thoughtless level it has no choice but to succumb, bringing your naughty parts along for the ride.

Other vittles revered for their love-inducing chemical properties include calf fries (aka rocky mountain oysters – the testicles of calves or bulls), celery (containing androsterone, a hormone naturally produced in males that stimulates sexual arousal in females) and oysters (loaded with zinc, a mineral known to control progesterone levels), which are also sexually suggestive in appearance.

Joining those wet, soft mouthfuls in the ranks of erotic-looking foods are figs, strawberries, bananas and carrots (with no dirty magazines back then, I guess the folks had to find some way to amuse themselves).

By comparison, our modern-day foods o’ love are ridiculously decorated and full of chemicals that ultimately seek to reduce overall health, and thus libido. If you’re thinking about heading down to your local HEB and picking up a box of those convenient red valentine treats in the bakery section, don’t even go there. Red dye no. 40 can elicit allergic reactions ranging from diarrhea and skin rashes to asphyxiation and death - not sexy!

And I’m sure you’re wondering about alcohol. Well, too much of it isn’t a good thing

it’ll put you to bed, not get you into bed. But the right amount can reduce inhibitions and increase sexual desire.

So this Valentine’s Day, if you can’t be with the one you love, munch on some aphrodisiacs and love the one you’re with.

But remember, no amount of wine or calf balls is going to make that person lying next to you in the morning look any more appealing. Mmm hmm

That being said, choose wisely the person you try this recipe out on.

1/3 cup sugar, plus 1 tablespoon set aside

butter and sugar for your molds - serving your Valentine crumbly, misshapen soufflés is not cool, unless you both intend use your hands in which case you'd better remember to make extra amaretto drizzle

Preheat oven to 400 degrees and place rack in center of oven. Generously butter four to six  8-ounce molds, custard cups or a muffin tin and dust the insides with sugar.

Using a double boiler, or heat proof bowl over a pot of simmering water, melt the butter and chocolate. Remove from heat and set aside while you beat the egg yolks.

Using an electric mixer (unless you have high-endurance arms from whisking salad dressings), beat the egg yolks and 1/3 cup sugar until thick, pale, and fluffy. Beat in the almond extract and then fold in the melted chocolate mixture.

In another bowl whip the egg whites until frothy. Add the cream of tartar and continue to whip until soft peaks form. Gradually add the 1 tablespoon of granulated white sugar and whip just until stiff peaks form. With a rubber spatula or wire whisk gently fold the beaten whites into the chocolate mixture, just until incorporated. Do not over mix or the batter will deflate. Divide the batter between the prepared molds. Bake for 10 to 12 minutes or until the outside edges of the cakes are set but the middle still looks a little wet and wobbly. You may have cracks on the top surface of the cakes.

While the cakes are cooling, stir the glaze ingredients until well blended and smooth. Spoon over each cake and top with whipped cream just before serving. Garnish with a sprinkle of cocoa powder and your choice sexually suggestive fruit.