February 06, 2014 at 2:19 PM
comment
Sunday, February 9 is National Pizza Day. We know all the basic pie topping from  pepperoni, ham, extra cheese and even pineapple. Get inspired to create something new with these six unique pizza toppings. And if cooking isn’t your thing, check out our readers’ picks for favorite pizza places. 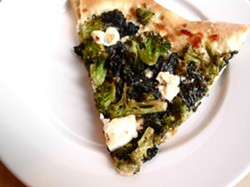 A whole lot of yummy green via In Praise of Leftovers

Broccoli seems to be left out of mainstream pizza toppings. It’s green so it’s understood that no one would let anything green near their bread and cheese. It might be a little unorthodox, but broccoli on pizza can be so choice. You can find something similar at Tiu Steppi's.

Recipe via In Praise of Leftovers

Sometimes you just need this much carbs. via Layers of Meaning

Potatoes on top of bread might seem a bit carb-crazy but this simple recipe may put that notion to rest. Just dough, mozzarella and potatoes are all it takes for this lovely pie. Find spuds on pies at Rome's Pizza.

Recipe via Layers of Meaning

Whoever invented breakfast pizza is obviously a god. Why didn’t we think of this before? Dough, cheese, bacon, egg. What more could you need for the most important meal of the day? Find an egg-filled pie at Barbaro for Sunday brunch. 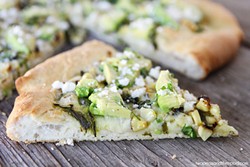 Creamy, cheesy goodness via two peas in their pod

This is kind of a double whammy for those thinking in the pizza box. Corn and avocado are unique to pizza toppings but this just might become a new staple. The barbacoa pizza at Deco Pizzeria comes loaded with fresh avocado.

Recipe via Two Peas in their Pod 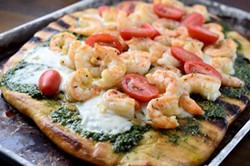 Ditch the pepperoni. via Life's Ambrosia

Shrimp and pesto is used a lot with pasta so it’s only fitting that pizza would work too. Best part is you can put as much shrimp as you want. Don’t skimp on the shrimp.

Sweet, smokey and spicy via My Life as a Mrs.

Alright, it’s Texas. We all love BBQ so why not put it on that pizza? This recipe is super simple to whip up and easy to customize.

Recipe via My Life as a Mrs.