September 16, 2014 at 5:52 PM
comment
Whether you're swiping right on Tinder, winking at other users on OKCupid (are the kids still using that these days?), or weighing your actual compatibility percentage on Match, date or "hang out" ideas should be stimulating and best of all cheap (going on one too many dates can add up, I guess). The mostly single and ready to mingle (that is when we're not slaving away at our jobs) staff members here at the Current suggest checking out these local joints when courting in this economy.

You're close enough to the Pearl at Stay Golden Social House (401 Pearl Pkwy) to seem really cool and in the know about the hottest new bars, and you don't have to drop a ton of cash. There's happy hour from 4-7 p.m., Monday-Friday with $4 daiquiris, micheladas and other select cocktails, along with $2 Pearls. Or stop in after 7 for a pair of $7 cocktails, and you leave a healthy tip.

Burger Boy rolls up charm and nostalgia in one fell swoop. Sit inside along the bar, or grab a picnic table outside while taking down a Bate's Special (just over $5). Crinkle-cut fries for the win.

Beer & Fries at The Luxury

Location, location, location: The Luxury (103 E Jones) serves up chilly craft brews. Two beers (stick with the $4 variety) and an order of fries (don't worry, they've added a huge new storage unit) should keep you under the $20 limit. Feed the ducks, stroll alongside the river. Easy peasy cheapsy date.

Slab Cinema at The Friendly Spot

The cervezas are limitless at laidback hang Friendly, and the Slab Cinema flicks keep rolling in. Heads up: Current events team members will be on-hand to watch Broken Lizard's "Beer Fest" 8 p.m. Wednesday. Pick up your tickets for the San Antonio Beer Festival and learn a few tips from the flick (actually, don't).

You can't beat $3 pours, free admission and food truck snacks with your beer-loving beau. Branchline Brewing is only open once a month,  so plan accordingly and don't forget to take a few lawn chairs. You can each have two pours and pick up a cheap eat via one of the trucks on-hand.

Tour the McNay, sit on the lawn, pet some puppies, grab a free beer, pay for food truck bites and never struggle for conversation with ART MUSIC FOOD DRINKS. Get there early or risk having to park off-site.

Get messy and keep it puro, and cash-only, at Ray's Drive Inn (822 SW 19th St), where an order of two puffy tacos will set you back just over $5 buckaroos based on your filling. Sides and cheese are extra. 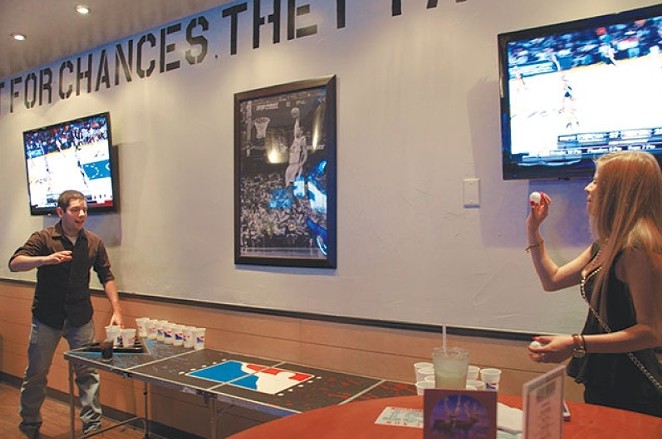 Figure out whether your date is a sore loser or if they're up for a playful good time at Slackers during Happy Hour from 2-9 p.m. It'll be easy to stay within your $20 limit with $3.25 wells and $2.75 domestics.

Maybe we're suckers for cute diners and even cuter soda fountains, but Olmos Pharmacy (AKA The Bharmacy) makes it incredibly easy and affordable to get to know someone. Root beer floats start at $3.49 or make it a malt for $4.99.

Ice Cream Cone on the Riverwalk

For the downtown denizen, there's always an inexpensive scoop at Justin's Ice Cream Company (245 E Commerce). Follow it up with a stroll on the Riverwalk. Picturesque, public and pretty San Anto.

This one's a bit of a toss up. If you really like the person and want to impress them and possibly spend hours chatting about god-knows-what, then SA POPS (3420 N St. Mary's) is the way to go for fresh-made fruit and cream-based paletas in a quaint setting. If you're not entirely sure about them, El Paraiso (1934 Fredericksburg) is still plenty cool (pun always intended), but not entirely conducive to long uncomfortable chats.

Find a more adult spot at Liberty Bar during their reverse happy hour from 10 p.m. to 12 a.m. that features $3 house wines, wells and select draft beers along with half off pizzas (regularly $11). Cheers!