We Don't Know What to Make of These Turkey Tamales 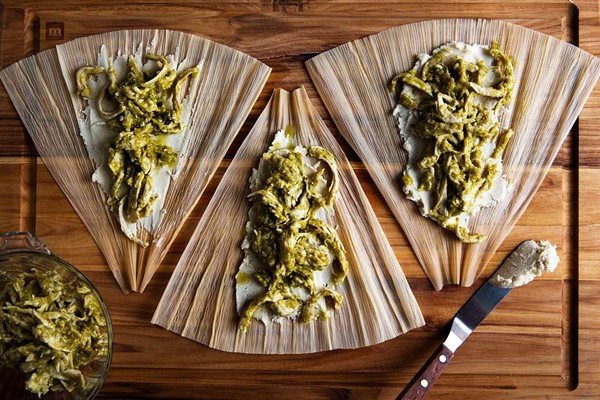 This week, the New York Times unveiled the "United States of Thanksgiving," a collection of recipes that capture the spirit and culture of each state. It's an admirable exercise to unite the nation under a gluttonous holiday that's steeped more in myth than in fact.

Idaho has hasselback potatoes with garlic-paprika oil, which makes sense because of the whole Idaho potato thing. Maine has lobster mac and cheese, and Mississippi has the sufficiently Southern-sounding ale-braised collard greens with smoked ham hock.

So which recipe did the New York Times determine to encapsulate the very essence of Texas? Well Georgia laid claim to pecan pie, which should be ours, even though pecan pie is gross. Since the nutty dessert staple was taken, Texas was left with turkey tamales.

A highly unscientific flash poll of my co-workers and dinner companions found nothing offensive about the recipe, but it also failed to ignite a passion for Texas that state-themed food tends to do. When the topic of turkey tamales came up, it was met with a resounding meh.

The recipe published in the Times comes from Tamales Place in Texas, a Leander-based, family-owned business that specializes in the Mexican holiday favorite. Shredded turkey breast and leg meat is mixed with a tomatillo purée that includes jalapeño and serrano chilies for that necessary extra heat. Spread the mixture on the traditional masa; wrap it all in a corn husk; steam the tamales and enjoy.

The most common question people asked when the topic of turkey tamales was brought up was whether or not the turkey would dry out and lose its flavor. It seems the tomatillo puree remedies that anticipated problem. Others declared the only right way to make tamales is with pork, but we're not ones to veto any nontraditional takes on Mexican culinary standards. The main problem it seems with the Texans I talked to about turkey tamales is that, while the recipe seems both Texas and Thanksgiving-enough, no one has ever thought to make or try them. So maybe we'll give them a go with our Turkey Day leftovers on Friday, but until then, the jury is still out.

That lobster mac and cheese, though. We can totally get behind that.