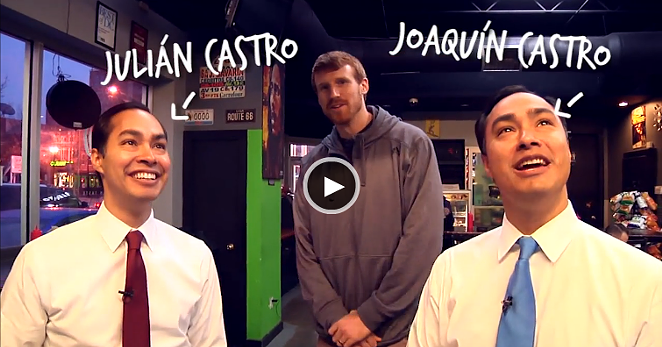 Talk about three birds with one stone. When the Spurs visited with the White House and President Barack Obama rightfully celebrated America's team, San Antonio's favorite redhead decided to hook up with the city's favorite set of twins, Congressman Joaquin and Secretary of the Department of Housing and Urban Development Julián Castro, for a segment of "The Sandwich Hunter," which was released today. Because Matty B, AKA the "Red Mamba," loves sandwiches (and like POTUS said, "How can you not like a guy like that?). Editor's note: He also loves Indian food, as I once creeped on him while in line at India Palace.

A few highlights: Bonner takes in two sammies, a Cubano and a Chivito. Bonner also "computes" a grade score for both by closing his eyes, scrunching up his face and holding his temple, as one does. Joaquin and Julián argue over who has a better cable package, and everyone chows down on some rather tasty looking sandwiches.

You'll have to take in the video yourself at nba.com for all the nerdy camaraderie.