by Jeffrey Hernandez and Jessica Elizarraras 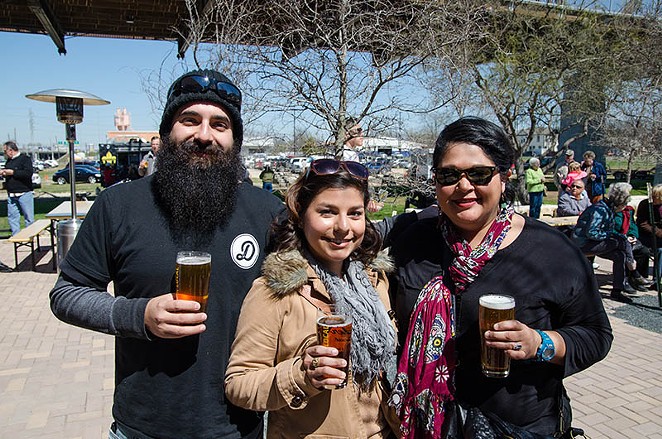 This weekend is an exciting one for Alamo Beer. They are going to be having their Legendary Grand Opening Weekend celebration. You can go hang out, enjoy some great beer and enjoy food from food trucks that will be there all weekend long.

It all started Friday March, 6 at noon with a celebratory first keg tap and cannon shot along with a visit by Mayor Ivy Taylor, District 2 Councilman Alan E. Warrick II and several hundred beer enthusiasts who filled the beer hall, eager to sample the three new brews. A lone pair of protestors yelled down from the Hays Street Bridge throughout most of the ceremony and following festivities, but the group has dwindle from the seven present during Alamo's ribbon-cutting.

On Saturday, March 7 the fun starts a little earlier. The brewery opens at 10 a.m. At 11 a.m. Camp Cookieville will be providing authentic chuckwagon catering. The music starts at 1 p.m. with K.R. Wood and the Gone To Texas Band followed by Los #3 Dinners at 9 p.m.

The next day there is a little something extra in store. If you're feeling like some brunch on Sunday you can join them for Alamo's Beer Brunch at 10 a.m. with food via Chef Pieter Sypesteyn who will whip up barbecued shrimp and grits among other goodies. You can buy your $30 tickets for the Beer Brunch here.

At noon the brewery opens up for the general public. At 1 p.m. the music starts with Laura Molinar and again at 4 p.m. with National Standard.

The brewery doesn't close until 10 p.m. Sunday. So you should definitely go hang out until the night is over and celebrate the opening of Alamo's new brewery at 202 Lamar. More info and a map can be found at alamobeer.com.