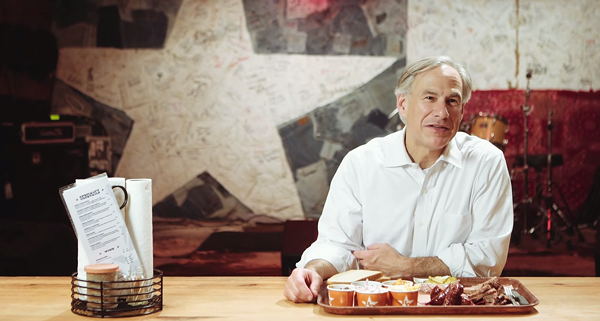 Abbott, the man who holds the state's highest political office, is now on record as saying "the most important thing about barbecue is sauce," a statement that is so very, very wrong. The governor made the declaration while dining at Washington D.C.'s Hill Country Barbecue Market in a video released this week by the Independent Journal Review.

As every Texan knows, barbecue doesn't need sauce — it's all right, but unnecessary — and the most important thing about barbecue is your smoking technique. He also proclaims Austin is the epicenter of Texas barbecue and sings praises for Franklin's Barbecue. Sure, Franklin's is all right, but people need to chill with the Franklin's hype.

Can we verify Abbott is even Texan?

Watch the video below. Then give yourself a facepalm on the governor's behalf.