The Granary Gets A Spotlight In New BBQ Book 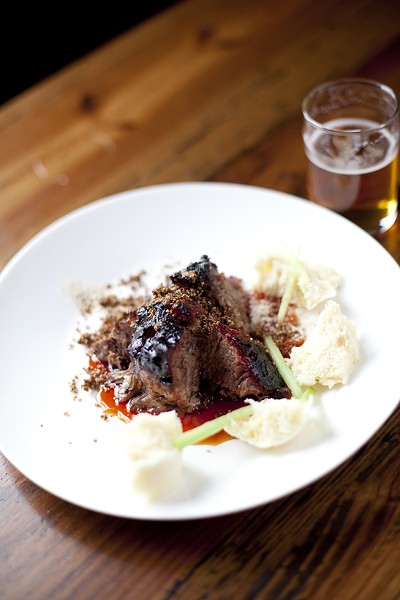 Whether one would consider 365 days of barbecue a heavenly gift or a diabolical curse to the digestive track, fledgling author Johnny Fugitt did what probably any Texan would've done if offered — left his job and took a year hiatus to take a cross-country road trip to discover the best and accidentally stumbled on the worst barbecue restaurants in America, in the aptly named book "100 Best Barbecue Restaurants in America" released May 12. From 365 restaurants, Fugitt trimmed the fat and kept the prime 100, with San Antonio’s own The Granary ‘Cue and Brew ranked the fourth best restaurant in the country.

In his ultimate countdown, Fugitt gave the fourth-place spot to the Granary ‘Cue and Brew (602 Avenue A), a white table-clothed establishment that isn't your traditional backyard pit.

In a separate listing in the book of the best non-traditional barbecue cuts category, the Granary also catches the #1 spot with its Beef Clod dish, prepared with coffee quinoa crunch, tomato caramel, pickled celery and cornbread.

So who is Fugitt, and what makes him an overnight authority on what makes great barbecue?

In the beginning, he wasn't. Fugitt is a St. Louis native who a year ago was working at the Ronald McDonald House. The stable life turned stagnant, and Fugitt decided he needed a new challenge, and he found that adventure written in his lunch – where are the best barbecue places? What started as a local endeavor to visit obscure pits and restaurants turned into a commitment that spread vastly across 48 states.

In an article he wrote for Feast, Fugitt admits he was only a casual eater and a from-afar admirer of barbecued dishes before his trip.

"I have always considered myself a casual barbecue fan, but the truth is that I knew very little about regional nuances, barbecue history, smoking practices and the way restaurants work before setting out on this project. I didn’t prepare much before setting off on my journey – I wanted to learn from the people working the pits day in and day out, not the so-called experts."

Fugitt’s end game was to see for himself whether good barbecue could thrive outside of the country’s established big four barbecue capitals – Texas, Kansas City, Memphis and the Carolinas. He planned to hit up 365 restaurants in 365 days, taking breaks back to St. Louis only to fulfill his commitment to the Navy Reserves once a month.

From tasting everything from Seattle through New York, Texas barbecue still reigns in the top ten of best barbecue dishes with San Antonio representing in the mix.