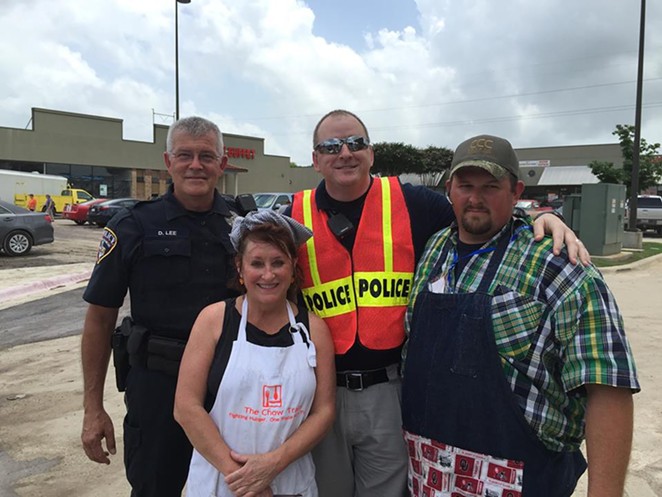 Texans are banding together to help Texans in need after this weekend's fatal flooding. San Antonio's The Chow Train (which gained unfortunate notoriety earlier this year for oh, you know, feeding the homeless) ventured to the flood-torn city of San Marcos Tuesday, May 26, and founder Joan Cheever estimates 700 beers were distributed throughout lunch and dinner. Taco Cabana was also in San Marcos helping feed those affected by the storm.

Cheever was joined by friend Rex Long (who drove the Chow Train to Joplin, Missouri in 2011) and Kevin Blackwood, another Joplin responder and now police officer and friend of The Chow Train. The menu consisted of Guinness stew over mashed potatoes, a garden salad with roasted beets and corn, roasted zucchini and once that batch was depleted, the Cheever and co. whipped up grilled chicken tacos on corn tortillas and mac 'n' cheese.

"You can only eat so many hot dogs," Cheever said. "It's not a knock on hot dogs at all."

But The Chow Train was doing more than that.

"It's heartbreaking. We're giving our meals and hugs and doing a lot of handholding," Cheever said.

Though more trips to the area are not scheduled as of yet, Cheever mentioned she may return to Wimberley which was hit hardest. You can donate to The Chow Train and help Cheever, who has an upcoming court date to contest her $2,000 fine, keep feeding victims of natural disasters and the city's homeless by donating to thechowtrain.com or gofundme.com.

If you're looking to donate to the area, Ranch Hand Truckfitters of San Antonio (2625 Broadway) and Boerne (32954 I-10 W.) will collect food, clothes or monetary donations through Thursday, May 28. The company will drive a truck of supplies to Wimberley on Friday, May 29.