by Sebastian Oates and Jessica Elizarraras 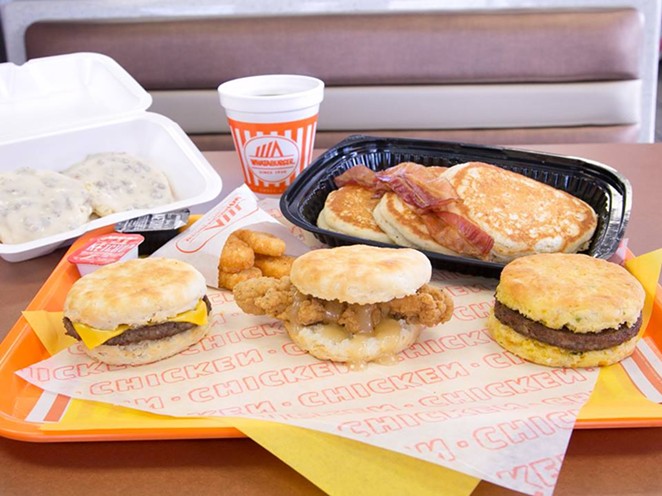 Huzzah! Mornings won't have to suck as Whataburger announced more changes to its breakfast lineup. Regular breakfast hours have resumed to 11 p.m. through 11 a.m., but eggs will only be served from 5 to 11 a.m.

Texas' beloved fast-food chain, Whataburger, is shortening its breakfast hours due to the sudden outbreak of bird flu that has compromised most of the United States' major egg producers. Although they will not stop serving breakfast entirely, for the time being the chain will severely cut their breakfast hours until a solution is reached concerning the national egg shortage. Whataburger will continue to serve break from 5 a.m. to 9 a.m. Monday through Friday, as well as, 5 a.m to 11 a.m. on weekends.

Yes, this means we're going to have to get out of bed early in order to get our Breakfast on a Bun. The same goes for those delicious taquitos.

If you have eaten at Whataburger recently there is no need to fear whether or not you have contracted the bird flu. The virus has not caused a safety issue with the chain's eggs, but rather a supply issue. As the prices per carton of eggs has drastically increased, the company has decided to concentrate its breakfast during its peak hours in order to better serve its customers.

Although there is no time timetable for an end to the shortened breakfast hours, help should be on the way soon. Whataburger is actively searching for solutions to their shortened egg supply. The company is currently looking at alternate suppliers to help make up for the loss of product while still wanting to provide its customers with the highest quality food available. On a larger scale, France and the Netherlands are expected to help as the United States begins to import eggs over the next few months.

The egg shortage will cast a shadow over Texas' summer mornings, but that won't stop us from being able to grab a bite of a good burger. At least it's not mad cow disease.