11 Foods To Try During This Year's Texas Folklife Festival

Polish cheese and potato dumplings slathered in a bacon sauce served by the Leopold Moczygemba Foundation. These will be served in orders of three at the festival.

The void of Filipino restaurants in town will be filled at the festival by the Filipino American in San Antonio, Inc. Chicken adobo is traditionally marinated in vinegar, soy sauce and garlic and served with pancit noodles.

Pastafrola = pie. Argentinian pie to be precise. Inspired by Italian immigrants, pastafrola is a sweet tart with its signature lattice pastry covering and commonly filled with either quince, sweet potato jam (dulce de batata), dulce de leche, guava or strawberry jam. This dish will be served by Case de Argentina.

The Scottish Society of San Antonio will be bringing it's herd in the form of shepherd's pie, a meat pie with mashed potato crust. Fun fact: when the meal is referred to as "shepherd's pie" and not "cottage pie," it typically indicates that lamb is used for the filling.

Hummus' lesser-known cousin, tabouli is an Arabic salad served with tomatoes, bulgur, mint, parsley and onion and seasoned with salt, lemon juice and olive oil. This (and hummus) will be served by the St. George Maronite Church.

A Pakistani fritter, pakora is a fried snack found in variations throughout South Asia. Its filling vary by the region its served in, but pakora's common main ingredient is chickpea batter. Also served at the festival are samosas, a triangular-shaped fried appetizer similar to pakora.

Arguably one of the most popular street foods in the world, doner kebab is meat shaved off a vertical rotisserie and commonly served on a pita or a sandwich along with tomatoes, cucumbers and lettuce. This Turkish food has multiple variations including the Greek gyro (which will also be served by St. Sophie Greek Orthodox Church) and the Arabic shawarma. Doner kebab will be served by the Turkish American Association of San Antonio.

Huli Huli chicken, the dish so nice they named it twice, is a Hawaiian specialty that is grilled in the sauce of the same name, which commonly includes pineapple, sesame oil, ginger, garlic, soy sauce, and brown sugar among other ingredients. This dish will be served by Aloha Kitchen. 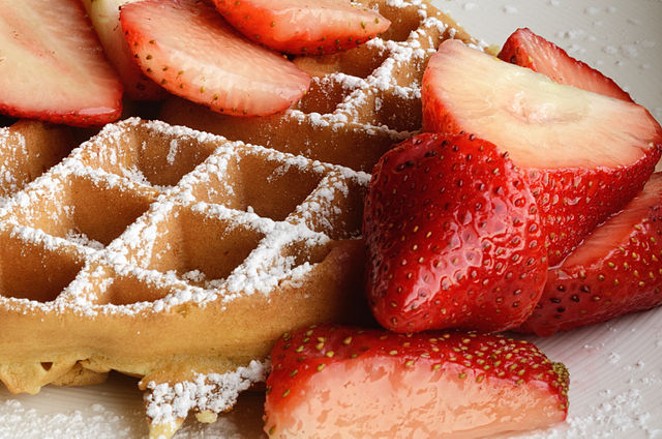 I don't need to explain this one much. What makes this waffle stand out is its bigger size and topping versatility. This classic treat will be served by the Belgian American Club of Texas.

Fry bread is a traditional American Indian recipe that can be served as a savory taco or alone with honey as a dessert.  These will be served by the American Indians in Texas at the Spanish Colonial Missions.

Commonly made as a "Reuben," the Colum Kille Division of the Ancient Order of Hibernians will be serving their sandwich on a cracked wheat roll. Wash this hunk down with a Guinness, which will also be provided.