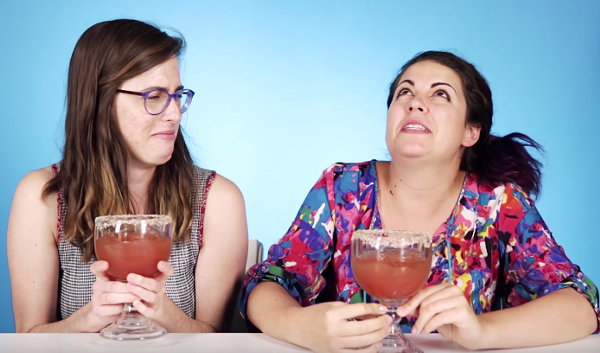 When the folks at Buzzfeed find a formula that works, they make sure to pump out a steady stream of near-carbon copy content until all opportunities to go viral are exhausted.

So goes with the site's popular video series wherein they gather people from one culture and introduce them to bizarre cuisines from strange, far off lands. Like that one time they subjected a group of unwitting Mexicans to Taco Bell, for example.

The culture/food combo may change, but the results are same. First there's cautious hesitation. ("The very idea of this food is weird.") Then there's the first taste, followed by immediate revulsion. ("This shit is nasty, yo!") But a few participants surprise themselves and wind up liking whatever they're forced to choke down. ("By Jove! I think I may actually like this strange alien slop.") And finally everyone realizes that although our foods may be different, we are all actually more similar than we realize. ("One love!")

Rinse and repeat. You get the idea.

Buzzfeed's latest application of the formula pairs young Americans with the michelada, Mexico's refreshing take on the bloody mary.

Although the bloody mary is America's go-to morning cocktail — at least until full-blown alcoholism sets in — the people in the video were completely baffled by the whole michelada concept. Apparently replacing one grain-based alcohol with another grain-based alcohol — in this case beer instead of vodka — is enough to shatter one's entire worldview.

"Are you serious?" asked one young woman who was most likely still drunk from the bloody marys she had a brunch.

"This is literally like a bad trip to Epcot," her cohort added.

No, sweetie. It's literally a bloody mary with beer.

No. It smells like a bloody mary with beer.

The men in the video all liked their first michelada. The women, who we'll call Basic 1 and Basic 2, did not, even though you just know they would be first in line for a bottomless bloody mary brunch, because that's how we in America roll. They were just so disgusted by the michelada's tangy amazingness.

Who knows? Maybe they just don't like beer with a nutritious, liquid serving of fruits and vegetables. They can go sip on whatever pumpkin spice bullshit they think is craze-amaze.

More micheladas for us.