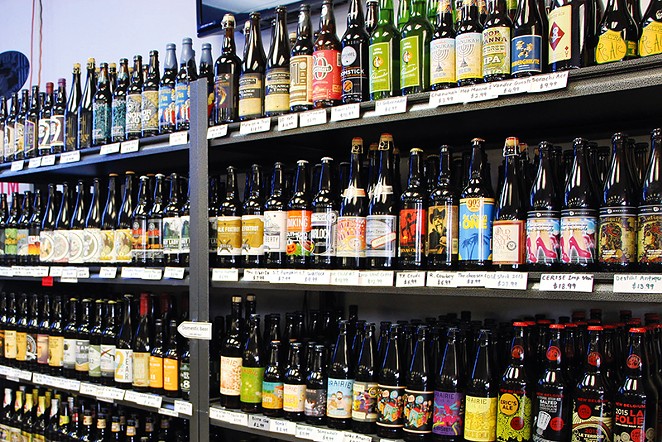 You can hardly swing an empty growler without hitting a specialty beer store in SA these days. Whether your tastes run toward bombers, tall boys or growlers to go, River City is a land flowing with milk stouts and honey kolsch. There are several parties who warrant praise for this outpouring, be they venerable institutions (Spec's, Total Wine) or plucky innovators (Big Hops, Missions Untapped, GS 1221) bringing craft beer to the masses. And yet there remain a few places that, while not entirely under the radar, occupy the margins of the average beer map, discoverable only through careful research or dumb luck. What follows is a short list of some of the best-stocked and least-expected bottle shops in town.

There are six coolers and five shelves packed tight with an impossibly well curated selection of brews in this little food store, more than a few of which are San Antonio exclusives (they had bombers from Houston's Buffalo Bayou Brewing earlier than anybody in town). The prices are average to high depending on your taste, but fear not: there's invariably some insane sort of deal on cases of really decent suds (I don't believe Keystone themselves could beat the $3.99-a-case deal NFM ran on Atwater's Ruta Maya Schwarzbier back in June), so you can still bring your roomies back something tolerable after blowing your budget on Mikkeler (again).

If you've ever washed a week's worth of grody laundry in Southtown, you've probably caught sight of Pik Nik. Look past that gnarly neon buzz and the, shall we say, disheveled status of its snack and toiletry aisles and turn your eyes to the coolers. There are beers in there, good ones: I once personally gripped a Dogfish Head 90 Minute IPA while my darks were tumble drying low across the parking lot. Price tags are not readily visible so let the buyer beware of potential sticker shock at checkout. In all events, taking a tasty brew home can take the sting out of spending your Friday night folding socks.

It's unsurprising that the biggest H-E-B in the state of Texas would also boast the biggest beer section. What does shock the first-time shopper is just how many kinds of beer there are. Beer and wine manager Carol Kelly puts the precise number at 983, including an entire freezer dedicated to Texas suds, where Ranger Creek, Real Ale and Shiner rank among her top sellers. An insane number of rare brews populate the aisle too, often at eminently reasonable H-E-B prices. I scooped up Prairie's most recent shelf whale, the rum-barrel-aged Pirate Noir, for a song.

In an area now packed with beer-buying opportunity, Canyon Golf Market keeps things on a more intimate scale. Sitting a little north of the Canyon Springs Golf Course, it's an unassuming brew-geek paradise. You can buy proper groceries there if you wish, but chances are you'll be distracted by endcaps comprised of Rogue bombers and four-packs of Dogfish Head's Midas Touch. With reasonable prices and a helpful staff, it's a must for Stone Oak's the discerning drinkers.

Gabriel's is likely the most well known store on this list, and, along with Northwest Food Mart, the only one with a Twitter presence. Beer manager Robert Johnson tweets every few days to keep his followers abreast of what's hitting the shelves, which has recently included an oak-aged St. Bernardus, half a dozen Evil Twin bombers, and the latest in Stone's "Enjoy By" IPA series. Brewery reps drop in frequently for demos. Take a leisurely stroll through the Belgian section while sipping a St. Arnold sample — and be sure to inquire about any rare stock lingering about in the back.

Out in San Antonio's westernmost suburb, there is a gas station that pulls triple duty as a barbecue joint of some note and a totally unsung repository of quality beer. The selection is narrowly focused but geographically eclectic — Detroit's Atwater Brewery, Salt Lake City's Squatters Craft Beer and the hometown Boerne Brewery dominate the refrigerators. You can also pick up each entry in DeStihl Brewery's Wild Sour Series when you stop to pick up a three-meat plate and side of potato salad while your buddy fills the gas tank, which is not a sentence you can say very often in your lifetime.