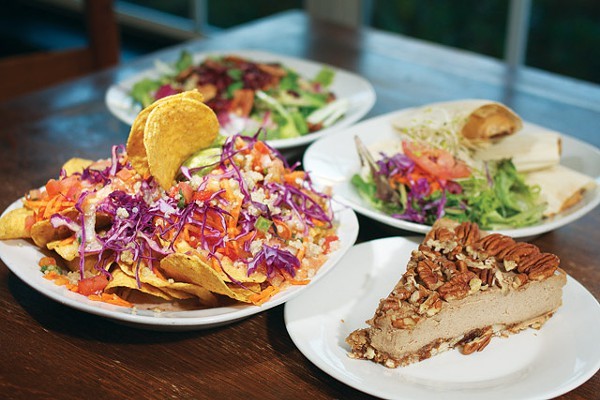 Come February 1, the original Vegeria Vegan Tex-Mex eatery will not be found at 8407 Broadway, Suite 1. According to a Facebook post by owner Fred-Anthony Garza, the eatery will close its doors on January 30, 2016 as building owners prepare to sell the property.

Vegeria on Broadway has saved over
1,050,000 animal lives. 187,200 million gallons of water have been conserved due to our efforts in the past years. 998,400 lbs of grain have been saved due to our plant based meals. We have utilized and supported small local business, created a conversation, boosted local economy, and taught over 1000 people how to create healthy vegan food at home. In addition, brought together over 40 local artist to display their works in our restaurant over the past 4 years.
We have accomplished more then I could have ever imagined within our small space on Broadway. We celebrate theses accomplishments today as we announce that January 30th, 2016 will be our last day of operation at our Broadway location. The owners of the building have made a difficult decision to sell the property.
What does this mean for Vegeria? We're still going to continue our traditions of creating a healthier option that ethically saves lives while honoring our culture and our ancestors. We're working on building up our location on Nogalitos with special events, live music, free and paid community classes. We will also be creating a folk healing herb garden in the spring. We want the chance to work more with local artist, non profits, and local activist. However, we have some new developments and projects in the works.
I'm creating a Vegeria food truck to be parked on the North side that will feature a select menu of favorites, as well as a few new dishes.
We will also launch a pop-up that we hope to create into a retail space. I have always believed in traditional Mexican folk healing. It's with that belief and encouragement from friends and family that I'm launching a traditional botanica pop-up entitled "Botanica de San Antonio." Our goal is utilize traditional Mexican folk healing with the additional elements of food, juice, tea, and education. It's a total package for healing of body, mind, and spirit. I'm launching this endeavor with monthly diners that will serve detox food, homemade juice, hand picked fresh herbal teas, while teaching on various topics of traditional Mexican folk healing. It's my hope to one day have a storefront that reflects all of these goals.
I'm emotional about this change, however it's a change that I'm embracing. I'm looking forward to the future. While its sad to say goodbye to our Broadway location. I'm thankful for its success, and the huge impact its had on our city. I'm proud of my staff and all that made it possible to create such an amazing restaurant and movement. I would like to give special thanks to my mother who's been a monumental part of Vegeria and to by grandma who's legacy made this dream a reality. David who encouraged and helped to support this dream. Viva Books who gave us a space and hope. Last to my amazing boyfriend Stephen who has been an phenomenal support and advocate of Vegeria. I move forward with a heart full of gratitude.
I don't have an exact date or location on the food truck opening but we're planing on opening February of 2016. Our new endeavor Botanica De San Antonio will begin operation in January. Please stay tuned for more exciting news.
Love,
Fred


TL;DR? Plans are in the works for a food truck based out of the North Side, along with a new "traditional botanica pop-up." In the meantime, you can still grab vegan bites at the Viva Vegeria (1422 Nogalitos, 210-465-9233), which opened this August.

We'll keep you posted with details as they come up.