All the Reasons We Can't Wait for Hot Wells Harvest Feast

by Jessica Elizarraras and Grant Carfer

There are plenty of reasons to fork over the $75 shells for a Hot Wells Harvest Feast ticket. The fourth annual celebration, which will be held at Lone Star Brewery (600 Lone Star Blvd.), takes place Wednesday, June 15 from 6 to 9 p.m. and brings together a veritable who's-who of chefs both local and regional.

Here's why you need to get your tickets ASAP before tonight's 8 p.m. cutoff. 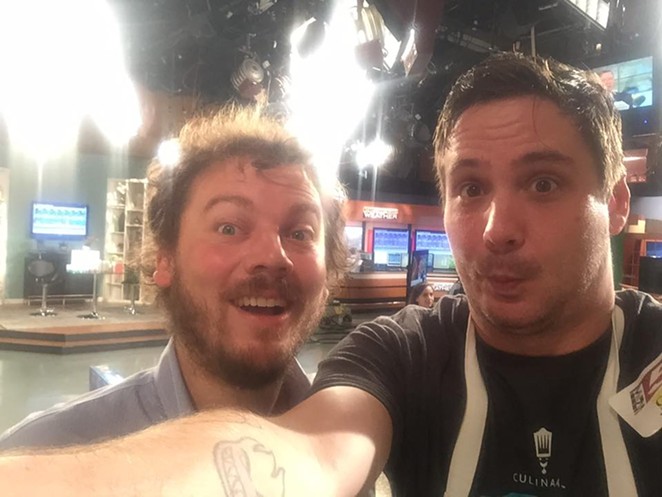 First off, it's hosted by these two. Artist Justin Parr (right) and chef Robbie Nowlin of Boudro's (left) essentially tap their pals around town to make amazing food. The two usually serve up a fun dish, like last year's Hot Wells kimchi, while buzzing around the grounds taking care of business. This year the two are dishing out a grilled pork belly flat bread "taco" with Hot Wells kimchi, sambal mayo, cotija cheese and garden herbs.

They invite folks like chef Jason Dady, who mentored Nowlin during his time at The Lodge in Castle Hills. A pro at all things food event, Dady usually busts out great interactive snacks like the hamachi ceviche bite he made for Culinaria's grand tasting.

Stefan Bowers will also be making a cameo at the Val party, er— Lone Star party. Known for opening Feast in Southtown and Rebelle in the St. Anthony Hotel with business partner Andrew Goodman, Bowers throws himself into every dish. Go see what he's got cookin'.

When he's not hanging around with Flaco Jimenez, or practicing law as a criminal-defense attorney, Fahle's attorney at barbeque in his food truck, Outlaw BarBQ. He's picked up a steady following with his slow-smoked meats.  Though he's sticking to catering events these days, you'll be able to get a taste of great barbecue on Wednesday.

Known for opening Oloroso, Toro Taco Bar along with his time at Biga on the Banks and a handful of renowned NYC eateries, Josh Cross is now slanging tasty tacos at Viva Tacoland. He'll be making a green campechana with shrimp and clams for the night.

Foodies that want to be ahead of the curve can get a taste for what's to come at Botika, the new eatery chef Geronimo Lopez is opening inside the old Arcade Midtown Kitchen space at The Pearl. Peruvian snacks, cachaca-filled cocktails? Sign me up.

Brothers and cocktailians Jeret and Jorel Peña of The Boulevardier Group will add boozy libations from The Brooklynite an Rumble. The drinks will help keep you cool since the temperatures will climb to 99 degrees this Hump Day.

Austin's Gardner is gone, but in its place came Chicon, that rekindles that casual Contigo vibe. Get a taste for what's happening 60-odd miles north.

Say.She.Ate's Brandon McKelvey's tying up his Jesus-like tresses and testing out a tamal recipe.

Since taking over at the helm of NAO last fall, Zachary Garza has found a home for his awesome ceviches, big ol' Cubanos and custardy French toast for weekend brunch. Let's hope he brings some of his stellar stone fruit-filled ceviche. 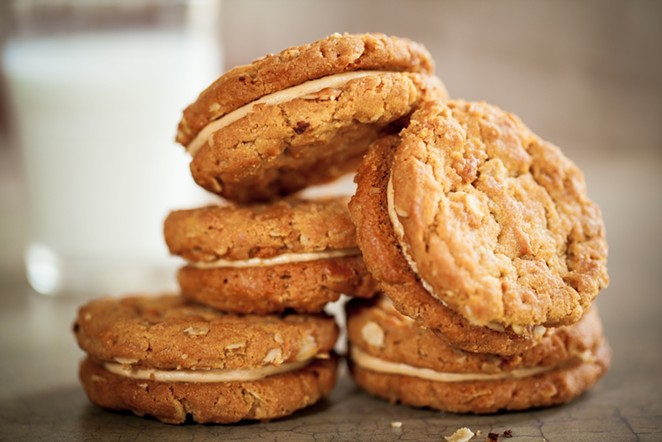 Do you love sweets? Do you love reality TV? Do you love whip-smart, tiny She-Ra chefs? Then you're going to fawn over whatever Rebecca Masson, a former contestant on Top Chef Just Desserts and pastry chef who opened Fluff Bake Bar in Houston last May, with sinful desserts such as cookies, chocolate and bars.

After announcing NOLA last week, Pieter Sypesteyn should be ready for all the brunch-related questions that are coming his way during this year's Harvest Feast. Go ask what pain perdu is and how soon they're opening the new restaurant.

There will be some heavy-hitters at this Harvest Feast celebration. Not only will chef Damien Watel of Bistro Vatel join the festivities, but peers Bruce Auden (seven-time James Beard Foundation Award nominee and chef-owner of Biga on the Banks) and Mark Bliss (who helmed Silo Elevated Cuisine before opening Bliss in Southtown) will also be joining the feast. 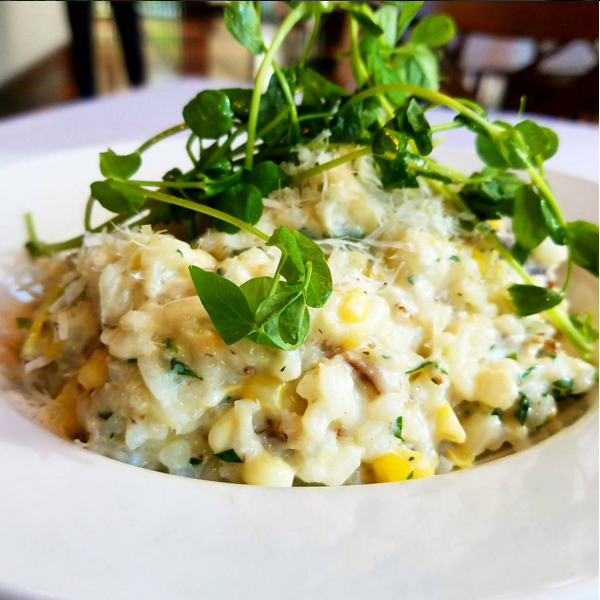 Always one to impress, Russ likes to bring it during most events. A tiny soft-shell crawfish báhn mi here, a sausage corndog there, a pork belly taco with fried kale are all just samples of what he's done in the past. We're ready to get wowed again.

Another showboat! But really, chef Jeff White's inventive bites usually take the cake at these events. He's one to run out quickly, too, as the crowd latches on to whatever bite he's making that day be it Spam burgers, corned beef pastrami sandwiches or killer ceviche. Wednesday's menu will include Vietnamese baby backs with watermelon, smoked yogurt and hearts of palm. 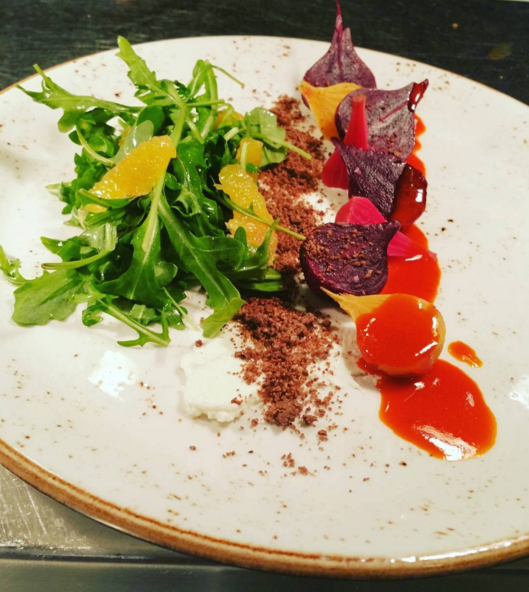 You'll get a taste for what chef Ashby Cowart is cooking up at Eilan without heading out of 1604. Win-win. 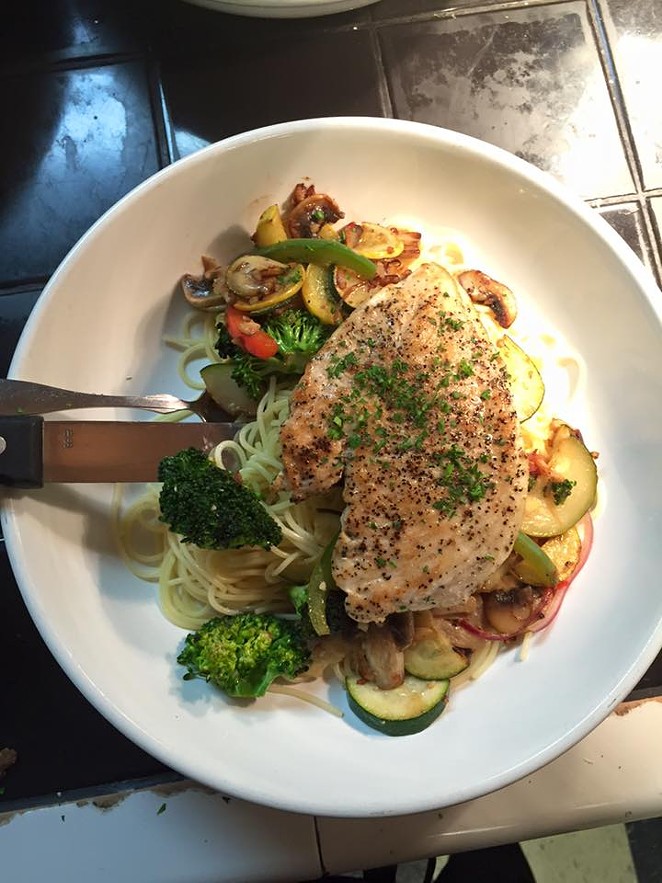 Chef Paul Morales will give the crowd a taste for the Boerne-based Fredo's Ristorante.

Though the Con Safos pop-ups at Faust are on hiatus, it'd be interesting to see what chef JC Rodriguez cooks up.

But what would really be interesting is if Lorenzo Morales of The Old Main Assoc. plates up his concha burger for the night. There's no drama between the two chefs but these two pan dulce beasties could finally go head to head and that makes my foodie heart flutter.

Southerleigh Fine Food & Brewery's Jeff Balfour will be in attendance as well. Like Bowers and Dady, Balfour usually delivers on fun festival fare.

Finally, the reigning champ of Hot Wells Harvest Feast, Christopher Jara is working on how to one-up himself from last year. I'm not saying he should make doughnuts, but he does have a knack for them. You can find Jara at the newly opened Cafe Dijon.