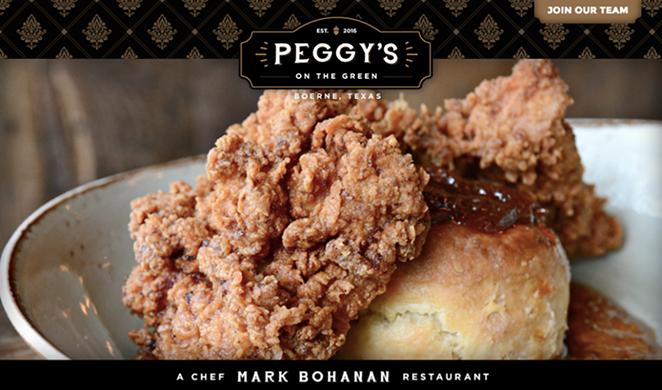 It's been probably the worst kept industry secret — chef Mark Bohanan is spreading his wings to Boerne with the opening of Peggy's on the Green (128 W. Blanco Road) sometime this summer.

Led by chef Heather Nanez, the restaurant is housed inside Ye Kendall Inn in the former Limestone Grille. The hotel was built in 1859, so adding a Bohanan's-grade bar and restaurant was an undertaking. The last several months included gutting out the existing restaurant and starting anew.

"We don’t’ have a specific date yet. We want to come out and tweak a few things, but the menu’s written," Nanez said.

Yes, steaks will make the leap to Peggy's (which is named after Bohanan's mother), but the restaurant's menu will also feature what the staff is calling "refined Southern."

"Once we came in here and started having a relationship with the restaurant, we felt we wanted to honor the space's history, but honor our mom's too," Nanez said. "It just makes sense here."

Expect to find Southern pickled shrimp, pimento cheese, fried chicken skins, shrimp and grits, pork chops at Peggy's on the Green, which will aim for a more relaxed vibe than Bohanan's but with a similar level of service that people have come to expect from the steak house.

On the drink front, the cocktail menu will include a few odes to the South, as well. With an indoor and outdoor bar, the menu will reflect that sit-on-the-patio type feel with juleps, a Freethinker's iced tea with bourbon in it, a Gillespie 75, Hill Country mule and a Cibolo Smash with rye.