July 11, 2016 at 7:49 AM
comment
The world of craft beers can be intimidating with all of its growlers, bombers and various containers and barriers to entry. It's easy to feel behind on the tasting curve. That's why beer flights are the best way to sample several recommended brews at once, to figure out what you like and what's too wheaty or bitter for your liking. With a roundup of SA bars offering beer flights, so you can join the ranks of local craft beer nerds and order up a mug like a champ.

Though famed for their namesake whiskey flights and similarly interesting scotch and bourbon tasters, this Northside chain also offers three beer flights starting at $12. Choose between a Local Flight, a Hop Head Flight, or build your own with your four favorite selections. 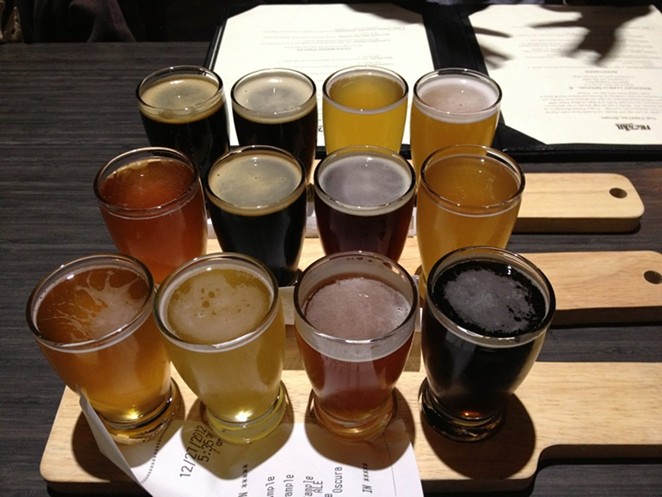 In addition to their delicious pizzas and pub food pairings, Freetail offers 4-beer flights with any of their brews, including seasonal and core favorites.

With three locations across SA and different selections available at each, Big Hops offers flights of local Texas craft beer. With brews from names like Deep Ellum, Fat Tire and more, the combos are endless.

Offering 4-beer flights starting at $12 and 8-beer flights from $20, Southerleigh has a selection of stouts, witbiers, IPAs, porters and their own brews to choose from.

For $10, The Granary offers a quad-beer flight featuring their Rye Saison, Coffee IPA, Brown Ale, and Seasonal Ale to pair with barbecue board for lunch or some pork chop at dinner.

With one of the most extensive collections of draft beer in San Antonio, Flying Saucer offers a variety of beer flights for drinkers of all experience levels, many of which have included sheets describing flavor notes.

Nestled away in the Medical Center, Busted Sandal has a small tap room where customers can partake in flights of their year-round beers, including the 210 Ale and Fire Pit Wit, and beers from their La Chancla Series like the Tanlines Pale Ale.

Blue Star offers flights for all of their own brews, including a flight of all the 11 or more offerings they have on tap, with selections such as the Southtown Sour and the Flying Pig to try out.

With a rotating list of 30 or more craft beers at a time to complement their new menu, flights are the best way to work your way through the extensive list. Pick your favorite from a 4-beer flight and bring home a growler of it to enjoy.