4 ½ Goses You Can Drink in San Antonio 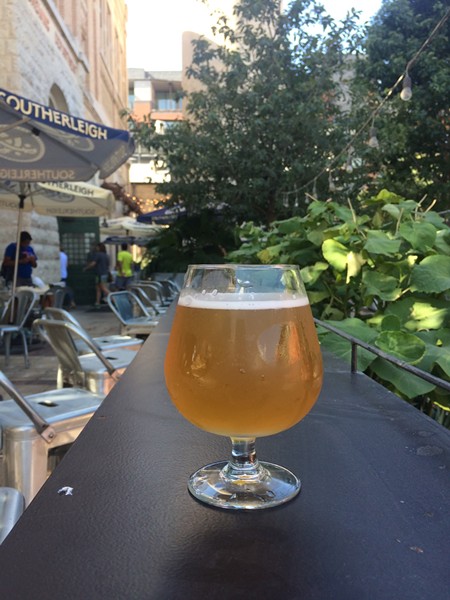 To condense the Erik Larson-esque history of the 1,000-year-old beer, gose (pronounced goes-uh) is a sour beer that was born in Goslar, Germany, moved to Leipzig, became popular, became unpopular, and now is enjoying a renaissance in American brewing. As a sour beer, gose has the trademark low alcohol percentage, pétillant effervescence and vinegary tartness of other spontaneously fermented brews, but distinguishes itself by being brewed with salt and coriander. Though as ingredients, sea salt and the seed that produces cilantro may seem like they’re jumping the craft beer shark, consider how common it is for drinks to come “dressed,” making the gose just the German version of salting the rim of your margarita.

As a tart, sessional beer, the drink is primed for summer consumption; the only problem is its relative scarcity. Aside from the Southerleigh, there are only a few other places in town to grab a gose (for now).

Lucky for you, I tracked them down.

Of all the goses in the city, Real Ale produces the most
quintessential, baseline version of the German delight. Though they
sacrilegiously add lime, the Real Ale hums with vinegary notes. Light, distinct
with the lemon-rind of coriander, and sharp, it best reflects the citric side
of gose.

With its strong mineral notes and aggressive effervescence, the Jammer reminds of a LaCroix or fuller-bodied champagne. The most traditional in its ingredients, Sixpoint’s gose rides heavily on its salinity, brackishly refreshing like a beachside breeze.

The brainchild of brewmaster Les Locke, the raspa-leaning
gose adds pureed cucumber, tamarind and chili to the traditional Leipziger
recipe. Do yourself a favor and drink this at least once this summer. Its smell
enough is swoon-inducing.

Full disclosure: Though this is not technically a gose, it
is still kind of a gose. “Solera” refers to the process of combining alcohols
of different ages, allowing the developed beverage to impart its fermenting
agents to the younger one. In the Oakemon, Southerleigh used their Steady As
She Gose as a starter, then added their Belgian Saison, introduced some
lacto-bacillus for sourdoughy twang, before then soaking it with oak chips. The
result has gose DNA, but the vanilla and oak notes of a chardonnay.

Sold in a 4-pack for $9, this gosea from tiny Illinois brewery holds the
distinction of offering the funkiest, most yeasty of the bunch. Light on the
salinity and herb, heavy on the sour depth, imagine a drinking vinegar with
body.