A Wishlist for Hemisfair Park's Tenants 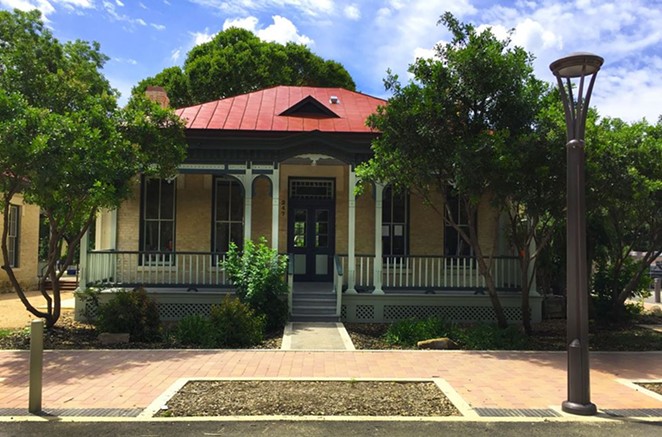 Last week, the Hemisfair Park Area Redevelopment Corporation announced it is seeking proposals for two properties within the urban park district after Revolucion Coffee + Juice and San Antonio Brewing Company both amicably ended agreements with the HPARC due to timing and brewery strategy, respectively.

As of right now, Paleteria San Antonio, which opened in May, is the only fully operational spot until Con/Safos Fruteria y Bar opens later this fall. Though the shops were announced in late 2015, buildout on the historic homes has been predictably slow. HPARC delivers tenants a blank slate, updated within State Archeological Landmark restrictions, which businesses have to turn into fully functional restaurants. Plus, it isn't exactly easy to toss a kitchen into a home built in 1883.

The city started seeking proposals on July 16, and there's a meeting set for July 25 at the Magik Theater for anyone interested in learning about the process. Proposals are due August 21 at 11:59 p.m. and the tenant selection process (interviews, site visits, reference checks, etc.) will run through August 22-28. (More information on the bid process can be found here.)

Ideally, the two businesses chosen to lease the OK Bar building and The Koehler House would be "park activators" that would attract more people to the area and Yanaguana Garden. The businesses — be they restaurants, bars, cafes, bakeries, bookstores, or craft shops — would be in place as Hemisfair keeps growing to include more parks, apartment buildings, offices and what nots.

Which got us wondering: If you could cherry-pick the two new tenants for Hemisfair, who should they be? Here are a few ideas.

Freetail Brewpub 2.0
Pizza and beer go together like...well, pizza and beer. The Loopland crowds were the first to get a taste for both Freetail's enterprising, funkified brews and their scratch-made flatbread pizzas. Sure, all beer-drinking adults can enjoy Freetail brews by simply picking up a sixer from their closest H-E-B now that the company is pumping beers out of its South Presa brewery. But, wouldn't a satellite location make sense? Toss in a brick oven, add a handful of taps and build out a massive patio? It's a win-win-win.

Taquitos West Ave. 2.0
Hear me out on this one: Taquitos West Ave. is a magical place that delivers trompo on weekends at hella cheap prices. What better to activate a park than addictive street tacos? The kitchen could even be outfitted outdoors (much like at the original location) and downtown denizens and visitors can get a taste for asada, barbacoa, tripa just a hop-skip away from the convention center. Mexican Cokes all around!

Viva Villa 2.0
Owned by the same family behind Mi Tierra and La Margarita, Viva Villa Taqueria at Market Square exemplifies new San Antonio as it holds onto delicious traditions while accommodating a younger audience that's used to cafeteria-style Chipotle-ish operations. We want our food and we want it now so we can go have picnics at the adjacent parks. Make it a quicker line with just a few heavy-hitter menu items, add the Big Red soft serve for the kiddos, and you're done.

A Diner
Literally, any diner that stays open 24-hours and gives us all a breakfast food options after a night out on the town. Think Pancake Joe's meets Kerbey Lane meets Waffle House.

Rise Up Beverages
A solid replacement for the juice bottle-sized hole Revolucion's exit left in our hearts, Rise Up Beverages is gaining a steady stream of followers at 2202 Broadway, a pseudo-mobile location that shares a lot with a few other vendors. Not only are açai bowls so hot right now, but they're relatively healthy and chock-full of fruits and veggies. Perfect for noshing on before you take a walk through the park or after you return your bicycle to its station.

A New Concept By Steve McHugh
James Beard Award finalist Steve McHugh needs to do us all a solid and spread his wings ... all the way to Hemisfair Park. A huge supporter of all things local, McHugh's Cured is well-regarded but it needs a little sister. Give tourist a taste for what SA can do well besides the awesome San Anto-inspired flavors they'll get at Con/Safos. Chicken sandwiches, wings, a simple but awesome sandwich concept — we'd be up for whatever McHugh's got cookin'.