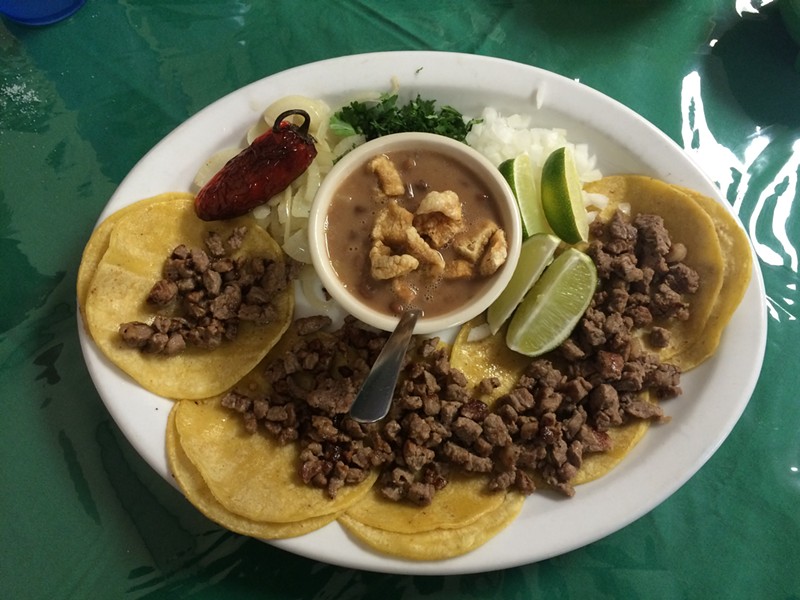 Like many great restaurants, Dos Meños Tacos has an unassuming façade. Located in an easily memorable redundancy of street names at Rittiman Road and Rittiman Plaza, the hole-in-the-wall Mexican eatery sits sleepily in a strip of office buildings and guards against inspection with darkly tinted windows. Stepping inside requires something akin to courage.

Once you do, like something out of a Lewis novel you enter another world, one bustling with the chatter of sweet, attentive servers, intermittent blasts of cumbia when the kitchen doors swing open, and the palavering of newscasters humming over the television. Diners choose between booth and table, though the place settings are all uniformly adorned with the same wintergreen tablecloths, the plastic tarps making any structural differences all but invisible.

Chips and salsa are provided, though the food arrives so quickly that your absentminded grazing will have little time to ruin your appetite. This is good, because the portions are gargantuan. Though a party of three can eat for $20, anyone counting would have to factor in the money diners don’t spend on their next meal to understand the real value of Dos Meños.

The restaurant runs a daily lunch special on enchiladas, offering three with any filling, rice, beans, guacamole and sour cream for $4.99, and it was this special that nearly half the clientele enjoyed during my visit. In fact, considering the popularity of the lunch special and the staff’s alacrity, it would be easy to mistake the restaurant for some sort of enchilada dispensary — a no-frills, no-fuss office building that makes its money doling out tortilla-wrapped meat products. Indeed, the volume of their take-out business would attest to the theory.

Still, should their enchilada siren song fail to entice you, fear not. Though their tortas ($4.99) come sacrilegiously sandwiched between hamburger buns abutted by ribbed French fries, the fillings — ranging from succulent asada to barbacoa redolent of bay leaf — are superb and come in abundance. Another value-oriented option, the mini-tacos ($6.50), arrive as an armada of corn tortillas piled high with beef, sautéed and fresh onion, borracho beans topped with chicharrones, cilantro and a broiled jalapeño. Each bite pays homage to the street tacos and truck vendors of San Antonio that peddle these tiny tacos daily, honing their touch and calibrating the few ingredients involved with infinitesimal precision. Though the food is homely, it is also masterful. And with the restaurant’s expediency and dirt-low price point, a visit to Dos Meños Tacos is a must.