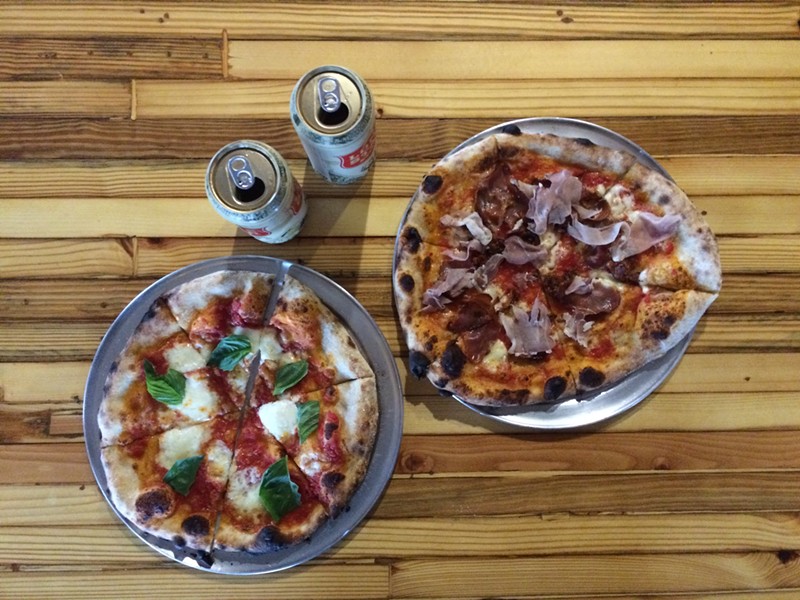 How much longer will it be before Michael Sohocki starts to get the attention that he deserves?  The polyglot chef created an entirely new cuisine when he opened Restaurant Gwendolyn in 2010, and received a James Beard semifinalist nom for his cerebral concept. When he opened Kimura in 2013, Sohocki gave the city its first pedigreed ramen restaurant, a milestone for which it was long overdue. And now in 2016, the acclaimed entrepreneur has given the city Il Forno, a DIY Southtown joint nestled in the intersection of Cevallos, Flores and Nogalitos streets.

Like Kimura, Sohocki has structured the Neapolitan eatery to be a cozy, affordable, neighborhood staple. Prices for a 12-inch personal pie range from $10-$16, though their “merende” offerings, lighter fare such as a watermelon panzanella ($8) and melon with prosciutto and ricotta ($8), are considerably less expensive and manage to more nakedly highlight the restaurant’s devotion to seasonal food.

Still, since you’re probably there for pizza, you can’t go wrong with the Entero ($16), a luxurious three-meat pie strewn with milky wisps of prosciutto, crunchy nibs of spicy pepperoni and the rich, burgundy mosaics of salty coppa. All of Il Forno’s salumi is cured in-house at Restaurant Gwendolyn and shared between the restaurants, and it shows.

If you’re looking for a cheaper option though, Il Forno has you covered with their happy hour special: Running from 3:30-6:30 p.m. Monday through Friday, the wood-fired restaurant offers $2 Lone Star tallboys (regular and lite) and $6 margherita pizzas. Since the pizzeria operates via counter-service and not a waitstaff, you can get buzzed and stuffed on food that should logically be twice the price, and do so while watching the restaurant’s talented team, helmed by industry vet Jason Garcia, man the oak-burning “il forno” with aplomb.

In addition to the bargain beer, Sohocki’s Italian dalliance hits closer to home with some characteristically local offerings, including a 210 Ale, Freetail Rye Wit, and Branchline Silver & Black IPA, among others. Head in to try one before August 27, and you can experience Il Forno’s special San Antonio Restaurant Week menus, lunch and dinner prix-fixe meals that include pizza and two other dishes well worth your dime.
Follow Mark on Instagram and Twitter