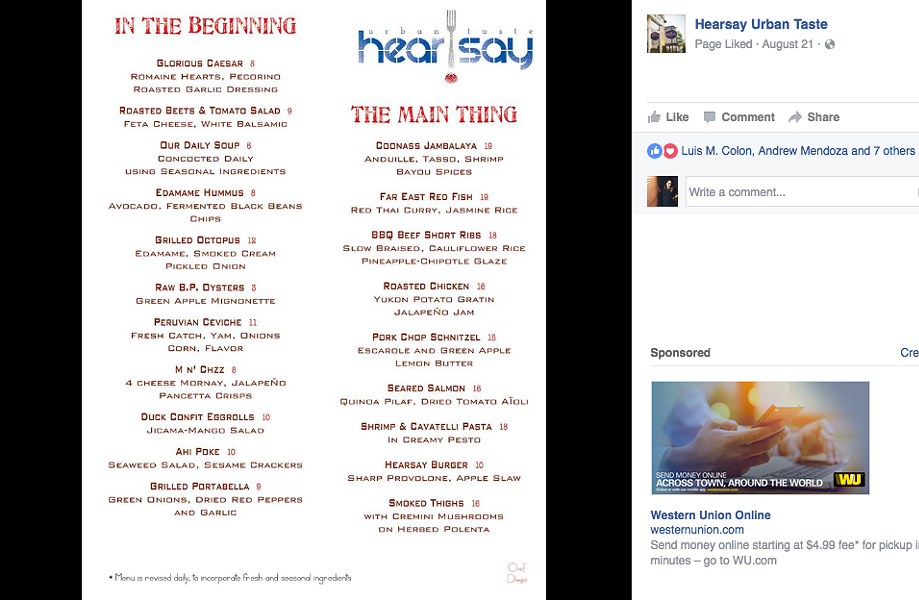 A Southtown restaurant learned valuable lesson in naming dishes after several patrons complained about the name of a new dish on their latest menu. The dish in question? Hearsay's "Coonass Jambalaya."

For those unfamiliar with the term, urbandictionary.com's top definition can elicit dramatically different responses:


Coonass is a controversial term in the Cajun lexicon: to some Cajuns it is regarded as the supreme ethnic slur, meaning \"ignorant, backwards Cajun\"; to others the term is a badge of pride, much like the word Chicano is for Mexican Americans.


Reader Junda Woo emailed the Current on Monday evening to express her distaste for the word.


"Context, people. Wouldn't bat an eye if this were on a diner menu somewhere in Acadiana. But in Southtown, this word (itself made up of two offensive words) seems like the worst kind of cultural appropriation.

(And then they couldn't spell andouille correctly.)"


According to chef/owner Rene Fernandez, the Facebook post made on Wednesday, August 21 was a preview of what was to come for the restaurant formerly known as Starfish, but the slur didn't make it onto physical printed menus after several complaints.

"I consulted with three friends, two who are Cajun and one who's from Louisiana, and they said it would be fun and to put it in," Fernandez said over the phone. "But once it was posted on Facebook, people who weren't Cajun or from Louisiana called it derogatory and we decided to take the word off the menu."

He said the original dish name was never printed on menus. The Facebook post is no longer available online.