Lunchtime Snob: Bachan Is a Must at Seoul Garden 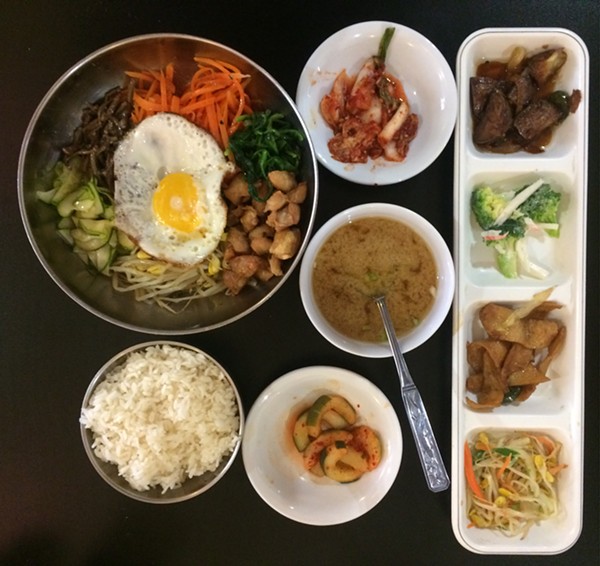 Believe me when I say that although I ended up at Seoul Garden by accident, it was the tastiest accident I’ve ever made.

Anyone familiar with the area around Rittiman and Wurzbach could understand my mistake. I'd wanted to eat at Seoul Oriental Market, but found myself surrounded by similarly named hole-in-the-wall Korean joints. So I accidentally stumbled into Seoul Garden, delirious with hunger and tailing the scent of bulgogi.

By the time other diners rolled in, I had long since disappeared into bibimbap ecstasy and was scarcely aware of my surroundings. Though the deeper side of the menu enticed, with offerings such as japchae ($12.99) and salted atka mackerel ($14.99), there was a clear choice for the lunchtime crowd.

The Lunch Box options are available from 11 a.m. to 3 p.m. Monday through Friday, and run from $7.99-$11.99. In addition to the entrée — options like bulgogi ($9.99) and kimchi soup ($8.99) — each dish comes with rice, a soulful miso soup, iced tea, and an armada of six traditional Korean banchan, side dishes of pickled vegetables and other light preparations.

I chose the bibimbap ($8.99), a Korean staple that has happily benefitted from the trendy “food in a bowl” movement. The dish is relatively simple: a fried egg is surrounded by sliced cucumber, julienned carrots, fernbrake, blanched spinach, sprouts and a protein of your choice. (If you choose chicken, the fowl comes fried in tiny room temperature nuggets.) The components are unsensational but fresh, which results in the dish tasting a lot like a salad: crunchy spears of carrot, delicate slices of cucumber, a yielding mass of spinach, and meaty mushrooms combine with an expertly fried egg to make a healthy and filling dish. Though with a squirt of gochujang (the sweet, spicy Korean equivalent to Sriracha), the entrée’s woes are quickly remedied.

The real star of the show are the banchan: Napa cabbage kimchi, cucumber kimchi, fish cakes, seasoned mung bean sprouts, braised baby potatoes, and a broccoli/imitation crab meat duo of dubious historical origin (think broccoli in sweetened mayonnaise). Each comes in a tiny bowl, which means a maximum yield of three to four bites, though with stronger flavored offerings such as the kimchi, so few bites is plenty.

The acidity and deep funk of the kimchi come as the result of a fermentation process involving gochugaru (Korean red pepper flakes), fish sauce, salt, water, and a prepared vegetable. Napa cabbage is the most traditional, but it can be intense enough to sour an empty stomach. The cucumber, cut into chunky half-moons, offers less exposed surface area than the broad cabbage leaves, and was thus a little less pungent. Still, the kimchis are not meant to be eaten alone, nor are any of the other banchan. Between the kimchi’s funk, potatoes’ decadence, bean sprouts’ vinegary brine and the fish cakes meaty chew, the banchan act as bumpers in a pinball game — sending your taste buds rocketing around, but ultimately balancing the flavor of the meal. Add rice, miso soup, and iced tea to the meal, and you’re getting much more than your money’s worth.