There are several things going for chef Jason Dady's latest project. Not familiar with the guy? A) You're probably a damn liar, or B) You live under a rock (or at least haven't been here for that long). But in case you really aren't familiar, the chef behind Tre Trettoria, Tre Enoteca, Two Bros BBQ Market, Shuck Shack, and B & D Ice House (which he co-owns with the Friendly Spot proprietors) along with now-shuttered concepts (Umai Mi, Bin 555, Insignia at the Fairmount), opened his latest eatery, The Bin, inside the former home of Bakery Lorraine on Tuesday night.

Now, Dady's track record alone breeds confidence that this will be a legitimate spot. When he announced the opening of The Bin at 511 E. Grayson St. (just down the street from Shuck Shack) last week, I was pretty enthused because the eatery would be going into that iconic and adorable home.

But I was concerned as to what exactly could fit in there. Last night's visit quelled those fears. There's plenty going on at The Bin.

A large communal table anchors the main room, while tiny tables dot the second which now easily fits a dozen souls. The interiors are filled with dark reds, chalkboard walls and mood lighting (this is definitely going to be a date night spot) save for the bar, which beckons with its varieties of gin and tonics (four to be exact), still unused (for now) porron pitchers, a healthy stock of booze and a smattering of neatly labeled and priced snacks. Because it turns out, The Bin isn't a restaurant. It's a tapas bar through and through. Sure, you can fill up on small bites and snacks, but don't expect to call in a reservation for multiple courses here any time soon.

As summer comes to an end (right? It can't be 90 degrees much longer, or can it...?), I'm still not into giant meals. And The Bin is delivering small bites that you can nom on before starting your night out, or if you're still peckish after leaving other joints. We tried a handful of items, or "picks," all $1-$5: Spanish olives (always fun), tortilla Española (almost custardy), Serrano ham-wrapped, blue cheese-stuffed dates (dreamy), and Gilda olives with piparra peppers and an anchovy (briny and perfect). The kitchen, which Dady says only holds a convection oven, is able to produce Bin 555 faves, priced $2-$22, including the goat cheese and tomato jam grilled cheeses of yesteryear (order two, don't share) and the patatas bravas (maybe the only plate we weren't floored by, but who goes to a tapas bar to get floored...). 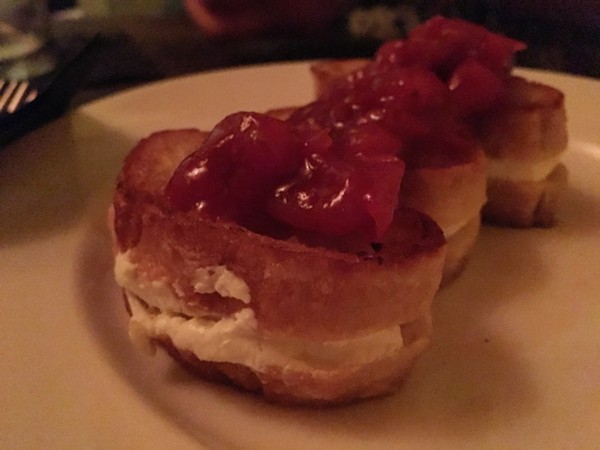 Well, there are porrons to be had. Thanks to the folks at Folc, I know how to shoot from the pitcher without chipping a tooth, but The Bin will make it easy to share a pitcher of beer or any wine with pals. Sure, it might turn into a splash zone, but the experience will be like none other in SA as of yet.

The Bin will open 3-11 p.m. Tuesday-Thursday and 3-midnight Friday-Saturday.