It seems that when receiving visitors from out of town there are always two things that they want try during their stay. One is Tex-Mex, while the other is Texas-style Barbecue. The Pig Pen turns into a one-stop shop by combining both of these tasty cuisines within their brisket nachos. 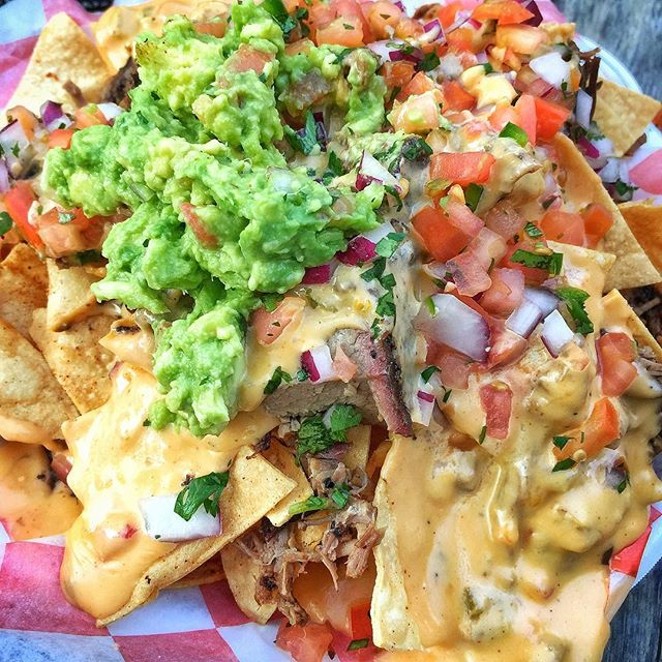 What makes these nachos so great? My bet is the time spent making the brisket that the Smoke Shack has been smoking in since 2010. Covered in a special spice rub and smoked over hickory wood for a whole 12 hours, the brisket gives other barbecue joints in Texas a run for their money. Take that brisket, throw it on some seasoned chips and then top it with a house-made queso, fresh guacamole and pico de gallo, and you have one of the best 'cue dishes in If you want to kick your nachos up a notch, top them with the sauce that is made by the Smoke Shack/The Pig Pen and a smattering of jalapeños. The sauce adds a hint of sweetness, while the jalapeños compliment the cheese-dowsed chips. While you’re trying to conquer the huge plate of nachos, you can sip on ice cold beer or Bloody Mary (complete with a brisket snack!).

The Smoke Shack, The Pig Pen's big bro restaurant, first began as a food truck parked at the corner of 410 Access Road and , has evolved over the past six years. Owners Chris and Kate Conger opened a brick and mortar off of Broadway in 2014, and The Pig Pen, complete with liquor license, a year later.

With the tender smoked brisket from Smoke Shack, combined with the classic nacho toppings of queso, killer guacamole and pico, the brisket nachos are a can't-miss dish at the neighborhood bar.