As it is just a bar and a barbershop away from the Puerto Rican haunt El Bohio, Aloha Kitchen, a tiny Hawaiian joint helmed by a gaggle of cheerful, brisk waitresses, helps elevate the strip mall down the street from Fort Sam from a cluster of commercial property to a bona fide dining destination. Where else in the city can you find Ropa Viejo and Lua Lua within walking distance?

With catering, event planning, and group options galore, the restaurant really only moonlights as a lunchtime eatery, making a fair portion of its income and expanding its fanbase often through its large format dining events. Still, if you find yourself lucky to be in the area sometime between 11 a.m. to 2 p.m., you would make a wise decision to visit. 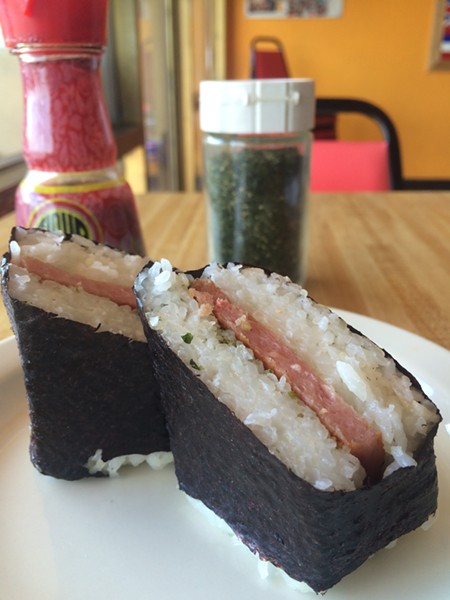 For the sake of tradition, start your meal with the Spam musubi ($2.99), that might as easily be called sodium three ways. With a little furikake sprinkled on top to numb the metallic saltiness, the playful take on sushi becomes an umami payload; before then, though, and to an extent still after, the sushi rice, Spam, and nori make for a salty trifecta, and perhaps one best tried for the sake of novelty and then shelved.

With your appetite whetted, Aloha’s midday plates offer a well-rounded meal for an economic eater. Go with the Draggin’ Meat ($9.99), and you can expect a gristlier iteration of pork bulgogi lacquered in such an umber, viscous teriyaki sauce as to make it indistinguishable from a Mexican mole. Or, for a dish that caused me to do a mental record scratch, inducing the fluttering eyelids and cocked-back head of genuine astonishment, try the Huli Huli chicken ($7.99), the kitchen’s version of chicken teriyaki. As my family lives in Seattle, I have likely had chicken teriyaki more than 50 times in my life, and the version Aloha Kitchen offers may be one of the best. Chargrilled but soft as a flower petal, the chicken was as moist as watermelon and as toothsome as rib eye. Maybe I just got an exceptionally tender, complex portion, but the Huli Huli seems to really be something special. 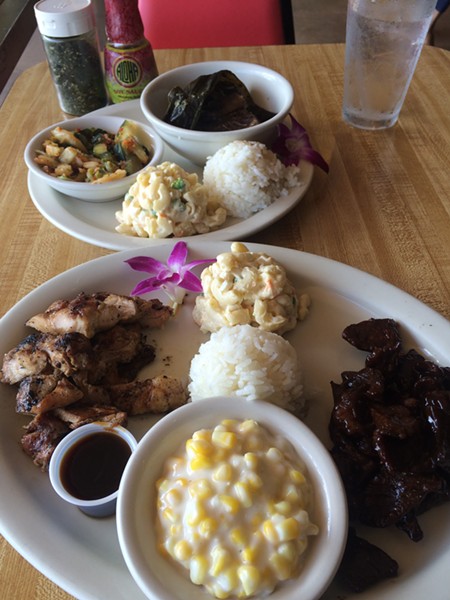 The more traditional Lua Lua ($11.99), however, failed to dazzle. A mixture of pork, fish, and beef wrapped in a traditional ti leaf and steamed, the end result could have been a stunt double for overcooked brisket. Other offerings, such as the coconut cream corn and macaroni salad, were similarly unimpressive, though less offensively so. Instead of the more Americanized sides, opt for time-tested creations like the house kimchi, a fresher, crunchier version of its funkier Korean cousin.

The menu offers some deep cuts, such as poi, lomi lomi salmon, and poké, but they are unfortunately only sporadically available. And though the restaurant had both its hits and misses, the exemplary service tips the scales in favor of a visit. The kind waitstaff are patient, whip smart, and unpaid entertainers, and, after just one visit, will make the restaurant feel like home. 1151 Harry Wurzbach Road, (210) 822-9933.