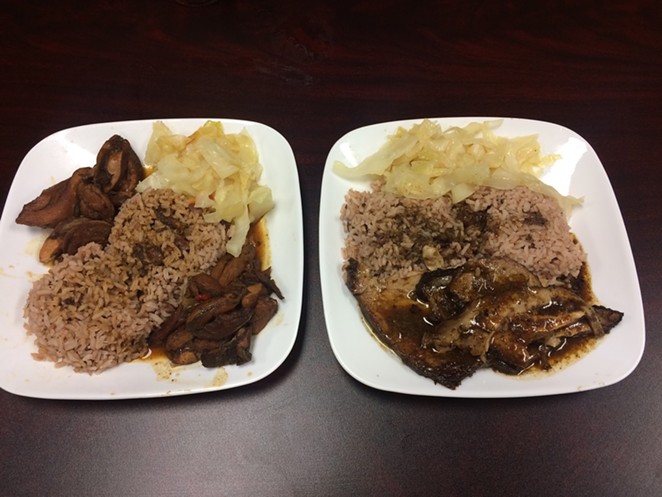 Inside the yellow, windowless restaurant tucked away in the North Hill Shopping Center off Austin Highway, were it not for the food, it would be easy to think you were dining in a bunkerhouse. A few decorations ring the walls, but the Bob Marley regalia and assorted TVs have a hard time combatting the cloistered feel of the eatery, the back half of which was literally shrouded in darkness.

Fortunately for me and the eight other diners sitting in the recently relocated Jamaican restaurant, the somber mood disappears when the food arrives. The reason is simple: Though she herself was not from Jamaica, my waitress explained, everyone in the kitchen is. And as much as I love transparency, her admission was almost redundant, as the food itself testified to the steady, practiced hands of its makers. 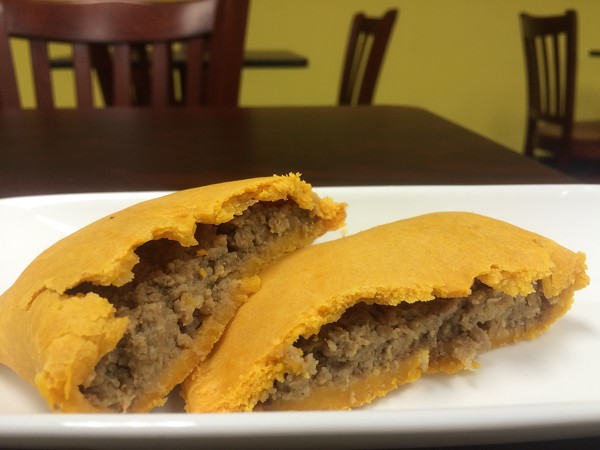 Begin your meal with an unassumingly named pattie ($2.50), the Jamaican version of a dish that nearly every culture has some iteration of, the meat-within-bread concoction. To my surprise though, the cooked-golden starch was doughy like a pupusa, not crisp and flaky like a turnover. Inside lay the real surprise though, as the ground hamburger rang with complex notes of curry powder and thyme, the flavor mimicking the spice of an Indian samosa more than the bland shepherd’s pie I was raised on.

Following your appetizer, you should know something. The menu is broken into “entree” and “small entrée”; this is misleading. It should be broken down into “large plate” and “entrée,” as the “small” plates more than serve one, something your server should (and did) point out. The odd delineation also explains the prices, which initially seem steep. Starting at $9.99, many of the options hover a few dollars more, but the most enticing options cost upwards of $16.99, which startled me. Once I found out, however, that those meals serve two, it made more sense. The “small entrée” section, on the other hand, is much more affordable, ranging from $7.99-$14.99.

All entrees come with a generous serving of rice and peas, steamed cabbage, and plantains, though they had run out of plantains early into the lunch service when I visited. The jerk chicken ($7.99) was more reminiscent of chicken teriyaki in the viscosity of its sauce, though the smoky, salty bite came closer to the kind of jerk I’ve had. The roast pork ($9.99), several gray slabs doused in a thick mahogany sheet, pull apart as delicately as spiderwebs, and work with the rice and peas to create a balanced, dense-as-bone kind of bite.

The service was so kind that it almost felt unprofessional, conversing with me on several occasions in several different locations of the restaurant, and their procedure for ringing a customer up feels more like a game of hot and cold than an exchange of currency. The informality did not bother me, but it might unnerve some. Still, there are worse problems than an overly friendly waitstaff, and the succulent, authentic food more than compensates.
2026 Austin Hwy., (210)  590-0515.
For more, follow Mark on Instagram and Twitter.