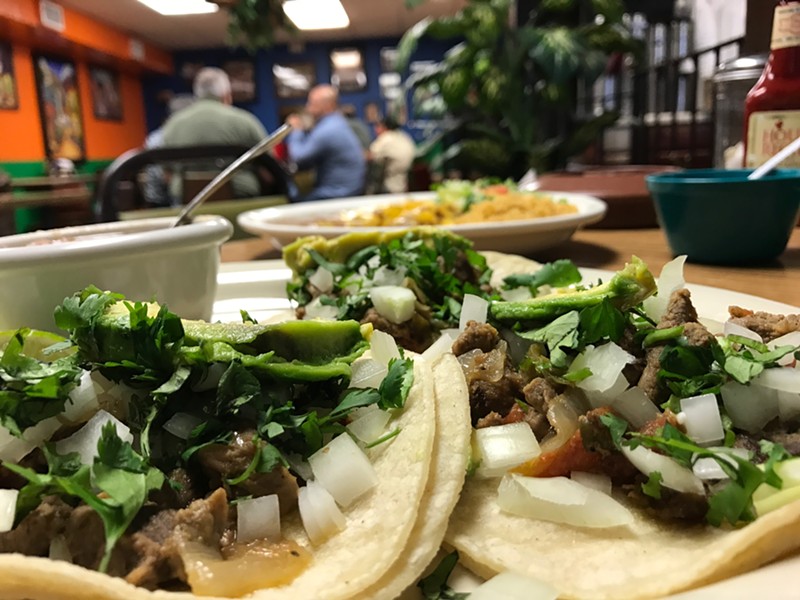 A tiny taco outpost located just off an area of Seguin Road that is particularly laden with potholes, Little Taco Factory is certainly no place for a date. The parking lot is bumper-to-bumper with work vehicles, and most of the clientele wore work boots and baseball caps. The sounds of the kitchen clang through a tiny pass behind the service counter, and the chatter of convivial exchange drowns out the murmuring TVs.

Though the restaurant eschews finesse, neither the food nor the service go unattended. Smiling waitresses greet you moments after you step through the door, and from then on they treat you like you’ve ordered bottle service at a club, providing a constant rotation of cheery employees catering to your every whim — not that you have many whims, outside of the tacos.

Though their breakfast offerings are the stuff of legend, The Little Taco Factory runs a tidy lunch service as well, and you would be well advised to take advantage of their daily specials. Marketed on a laminated sign that is kept outdoors, three entrees are available for $5.99 each Monday through Friday. The day that my dining partner and I visited, a Wednesday, the eatery was running specials on a crispy taco plate, enchilada plate, and chop sirloin steak.

My waitress mistakenly said that the street taco plate ($7.99) was on special, though I later realized she had confused it with the crispy taco plate. The mix-up was identified and sorted out, but the incident spoke either to the newness of the specials or the newness of the waitress, neither of which ended up being important, as she was gracious and gave me the special price on the street tacos.

Once seated, you are greeted with chips and salsa, and though the salsa was cold, spicy, and fresh, the chips were lackluster, tasting more like Styrofoam popchips than fried tortilla triangles; the culprit may be that they microwave the chips before serving them. The food then arrives in massive portions, along with a container of fresh, dense tortillas, coated with a granular dusting of flour.

The street tacos were three disks of corn tortillas, each loaded with caramelized onion, avocado, sirloin steak, cilantro, and fresh onion. The sautéed onions sweetened out the mix, and with a squeeze of lime, made for a verdant, succulent bite. 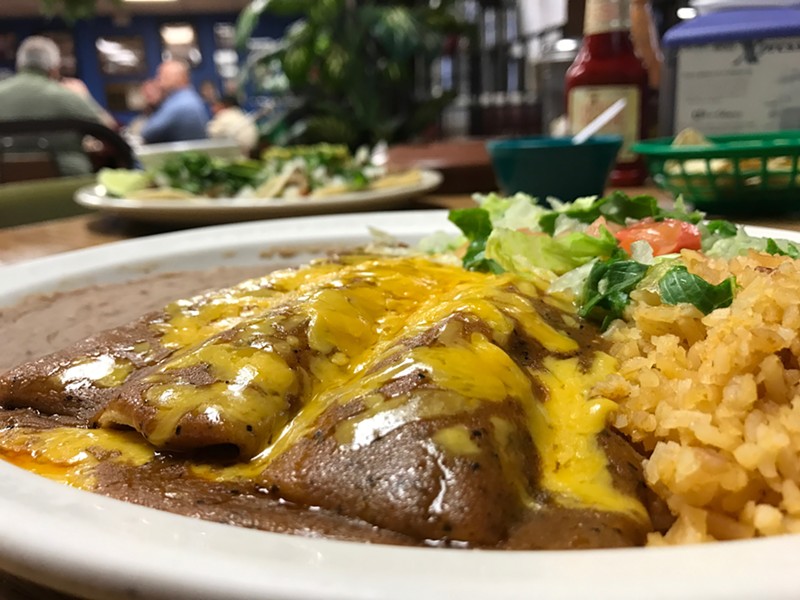 My entrée, the enchilada plate, was the standard offering of three tortillas filled with ground beef, smothered in rojo sauce, topped with melted cheese, and flanked by beans, rice, and a putative salad. Though nothing special, the meal was affordable and quick, and the tortillas allowed me to make my own tacos, bringing individualization to what is otherwise a pretty formulaic plate. The prices at Little Taco Factory are dirt-cheap, and the service is quick and polite. If you can stomach some gummy tortilla chips, then there is more than enough reason to visit. 4706 Seguin Road, 210) 661-7644.