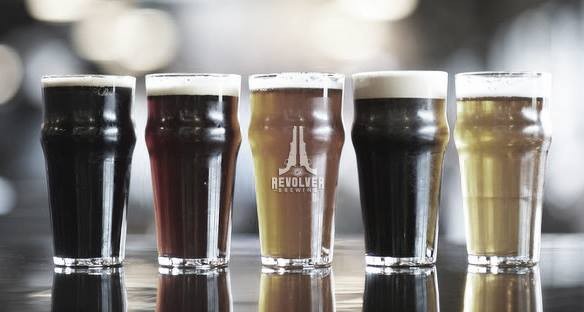 The brews will be available largely on draft in the beginning at the usual craft beer haunts, with some bottles floating around town as well. A seasonal or two may even show up.

Grant Wood, brewmaster and business partner, shared that
"San Antonio was always in our sights," but they needed to wait until they could increase capacity in support of the distribution. Armed with the opening of a new, larger brewhouse and cellar, the time was right.

Wood has certainly amassed quite the brewing resumé. After graduating from Texas A&M in 1984, he went to work at the Pearl Brewery as a brewing manager, often working the overnight shift. Pearl sent him to brewing school at the Seibel Institute in Chicago to further fine his skills. After four years at Pearl, Wood was whisked away to the nearby Lone Star where he worked for six years, before heading to Boston to work at the Boston Beer Co. for 16 years.

Revolver was founded in 2011 by father and son Rhett and Ron Keisler. The Keislers had placed an ad for a head brewer and Ward, who was brewing with the Boston Beer Co. at the time, answered the call.

“I saw an opportunity to be apart of the burgeoning craft beer scene in Texas and get back to the area where I grew up,” says Wood, who along with Rhett and Ron will be at various release events during the launch week.

In September 2016 a majority stake in Revolver was purchased by MolsonCoors that Wood says allowed the brewery to expand their distribution. Ward and the Keislers do maintain an ownership stake in the brewery.