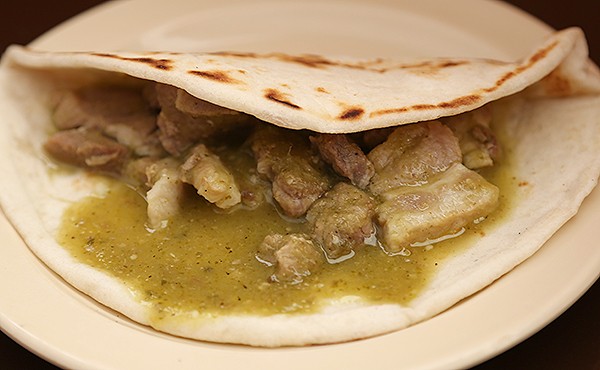 Really, all I'm looking for while hopping from taqueria to taqueria across San Antonio is greatness in taco form — a life-affirming taco I can't wait to tell you about, a taco worth driving across town for.

I believe I've found such a taco at Taco Mexicano on S.W. Military Drive — the pork in salsa verde.

Nestled in a flour tortilla are bite-sized pieces of pork in a green salsa I presume to be roasted tomatillo. It's a classic Mexican dish, and yet uncommon on breakfast taco menus in San Antonio. Taco Mexicano's version is the best I have ever had. The pork is tender and semi-fatty. From the sauce comes a richness that I would attribute to pork fat, mellowing out the tangy tomatillos, and garlic. I also would put down serious money that the drippings from the browning of the pork were reconstituted into the sauce like any good braised anything. Duh.

No need to add cheese or apply any salsita — you'd most definitely ruin this taco that way. It's basic, with just enough sauce that it's not too messy. The flour tortilla is sort of layered to indicate it had puffed up brilliantly while on the comal — perhaps the slightest of crispiness along the edge, but perfect for sopping up the salsa that escapes from the ends while inhaling this taco.

Our waitress had to recommend it because it wasn't on the menu. I asked her as I was paying if the pork in salsa verde was a regular dish at Taco Mexicano, and she said yes. 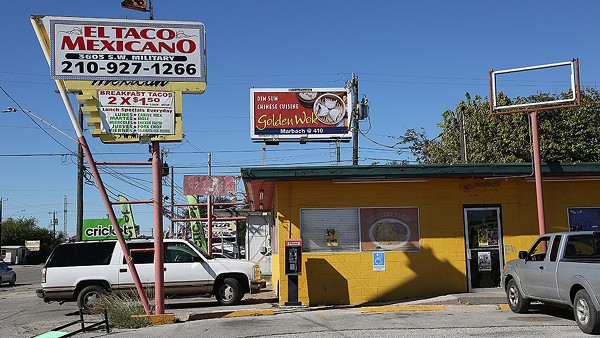 The other tacos, unfortunately, weren't as satisfying.

The bean and cheese was a respectable bean and cheese, the beans obviously made in-house. The papa a la Mexicana was greasy and lacked seasoning. The nopales were too salty and clearly came from a bottle or can. The chorizo and egg was the strangest chorizo and egg — the chorizo brand would be unrecognizable to most San Antonians. I can only say — and I know this is strange— that it tasted like egg drop soup in a taco.

Nothing to write home about on the hot sauces. I'd recommend getting something on corn — that tortilla was soft, almost paper thin and tasty.

The Taco Mexicano building on the South Side is old and rundown and seems like it's been about a dozen different restaurants. Google still calls it Jalpa Mexican Restaurant. There's a diner set up in the front complete with a countertop and short stools, kitchen window with ticket wheel. A separate dining area looks to be an add-on. They do karaoke, too.

I want to go back to Taco Mexicano to see what else on the menu, if anything, can live up to the pork in salsa verde. Maybe it was to relive its glory, or rid myself of the other taco's blandness, but I definitely ordered a second.

Taco Mexicano The Tacoist Tacos on the Southside