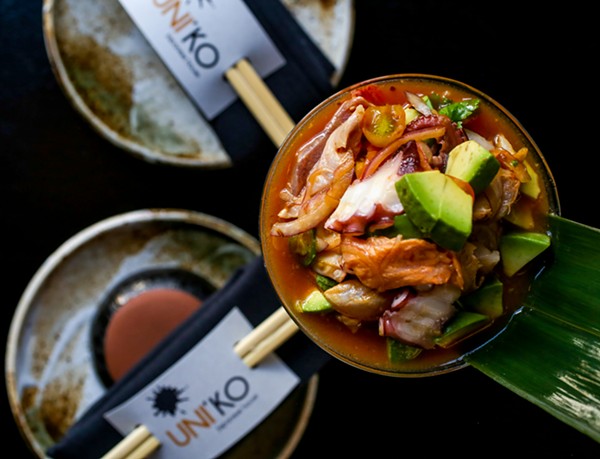 A couple of Japanese-themed restaurants opened recently within a yen’s toss of one another on I-10W. Both displayed some degree of Mexican influence. With elaborate rolls taking front and center, neither seemed to be emphasizing sushi in its traditional form. How to decide which to try first? Count the cream cheese.

The cream cheese count may prove to be the wrong criterion in the long run — and yes, cream cheese and fish do go together seamlessly in the case of bagels and lox with a schmear. Call it snobbism or call it cultural bias, but it’s what tilted the balance in favor of Uni’Ko, an intimate enclave tucked away under the patio that fronts George’s Keep at Eilan. There were only three instances of the rogue ingredient on the relatively compact menu — assuming I counted correctly. We didn’t order any one of them.

We did start with another supposed hybrid, however, the Uni’Ko ceviche touting “mixed seafood, assorted sashimi, scallions, cilantro and citrus sauce.”  By whatever name, the seafood/sashimi component was fresh and abundant. Equally generous was an unmentioned cohort of sliced serrano chiles that would have pushed the limits even at a coastal Mexican dive. There might have been some ponzu, Japan’s citrusy soy sauce. But my advice here is to forget Nippo-Mexican mashups and think of this as a straight, if picante, ceviche — albeit one priced at $19. You can spend the same on the truly audacious Aji tuna tower, a stacked creation also consisting of rice, cucumber, crab mix and flying fish roe.

Neither Japanese nor Mexican, but seeming more  in the Cali-fusion vein, is the Octo, a salad composed of mixed greens and grated carrot in a spunky dressing, all topped by octopus sashimi. What you see here is totally what you get. And I’d call it a success, especially considering that octopus can be texturally challenging, even when thinly sliced. So far, though, it was hard to tell what direction all this was heading in.

So we sucked it up and ordered a roll; there are 24 of them vying for your attention in prices ranging from $15-$32 — each more Instagram-worthy than the next. (This will likely be the only time I will ever call your attention to Yelp, but the number of photos, most of them rolls sporting varying degrees of Vegas showgirl regalia, flames included, is impressive — clearly there’s an audience.) But I wanted less flash (and rice), and more seeming substance, so selected the relatively modest Samba roll ($22) for its rice paper wrapper and straightforward-sounding filling. Maybe should have gone for flash.

The roll’s wrapper made this creation look something like a translucent summer roll that had been sliced and set adrift in an angry-looking puddle, one that turned out to be a mixture composed of togarishi seasoning (think chili flakes and more) and Sriracha, all held in breathless suspension by ponzu. The shoe you may be expecting to drop now will: the fiery liquid all but obliterated the delicate wrapper and its contents — (genuine, if bland) crab mix, hamachi, tuna, shrimp, avocado, daikon sprouts …Next time, Dragon Fly despite all its ferocious wings and things and saucy swirls.

The small sushi bar that greets you upon entry doesn’t look as though it would hold much variety, but it was inevitable that we should try the nigiri just to see if the chef, formerly associated with Sushi Zushi according to our cheery waitress, could deliver on the basics. Short answer: yes. We did have to ask for wasabi and ginger, and I might have preferred the rice to be a little more compact, but the tuna, yellowfin and scallop slices draped over each lozenge of rice were impeccably fresh, and that’s what counts most. Try them first without any dipping.

The restaurant’s name, a play on the Spanish word for unique, is reconstructed from sea urchin roe (uni) and a Japanese suffix sometimes meaning small or girl.  So here’s an idea:  start first with the sushi chef’s recommendation of the freshest nigiri or sashimi; if the uni is impeccable, by all means get that. Seafood salads are usually safe. Then order a mild but pleasant Lucky Buddha “enlightened” beer (the bottle is worth the price alone), and watch the rolls parade by. (Cocktails are said to be coming, but I’d go to George’s Keep for those.) If you just can’t resist, then fine.  But please: no cheese.